Wild Dogs take back their kill

One morning after tracking down and following the Mhangene pride for most of the morning, we heard that the pack of Wild Dogs had been found. We decided to head on over to the area where the dogs had started to settle down. Being late in the morning and already fairly hot we expected the pack to just be lazing around and mostly sleeping. 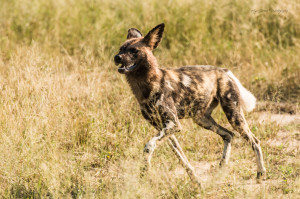 As we entered the sighting, the first thing we saw was a Hyena carrying an Impala carcass in its mouth with three of the Wild dogs following close by. There was however no sign of the rest of the pack. We followed them to a shady area where the Hyena decided to feast on his stolen spoils. Meanwhile the three dogs stayed close by just watching and hoping to get some back. 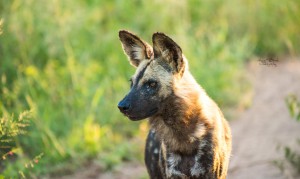 We could hear the rest of the pack calling in the distance, and with that one of the three dogs started running straight back to the rest of the pack while the other two remained. It wasn’t too long before we could see the pack return. With the pack in full force the Hyena realized that it was outnumbered and made a hasty retreat, leaving the Wild dogs to feed on their well earned meal.

Please enjoy the video below and remember to turn up your volume to hear the excitement of the pack.