Having just returned from Plettenburg Bay where we spent our last leave, whilst on a fishing expedition, Louise hooked into something more than she bargained for.

What started as a quiet afternoon’s fishing trip aboard the Plett Sports fishing charter on February 25, soon changed once anchor was dropped and we started fishing near the junction of the Keurbooms and Bitou rivers.

After having our lines in the water for just over half an hour, suddenly and in quick succession three of the rods started bending over; reels were spinning and drag systems screaming.

The pandemonium that ensued only lasted a few seconds before our lines went slack; all three hooks were bitten off… Our first thoughts were that there were some big shad or elf around – with the cold water of the time, this would make sense.

So Plan A was implemented: steel traces and bigger hooks. Once again we cast out and after a short while the same chaos erupted with reels screaming and rods doubling over. It soon become apparent that we did not have enough line on our reels to hold on to whatever was on the other side!

At a rapid rate all the line disappeared off the spools. There was nothing else to do but hold on, resulting in lines snapping and puzzled yet excited looks on all faces.

After re-rigging and baiting up we decided to make a Plan B: once anyone on board got a solid hook-up the rest would reel in and the anchor would be pulled so, if necessary, we could follow whatever was taking advantage of us.

It was not long before two of the rods went into replay; all other lines were brought in and the anchor was lifted – now we were ready.

It was not long before one broke free, leaving us with one still on. All eyes and concentration were now focused. This fight was going to be a long one, judging by the way it was pulling a boat with five people on board around the river.

Our first glimpse came after about 20 minutes, when at a distance we saw a spectacular swirl. We realised that whatever it was, it was large. To our surprise – or shock, rather – 45min into the fight we saw a dorsal fin gliding through the water. Still on the wrong track, we guessed it to be a big leervis.

Minutes passed before all was revealed as a shark of over five foot came cruising past. Firmly attached to our line the battle was not over, as it took off once more. More than an hour had passed before the tug of war, with a small river rod using 8kg line, was over.

Needless to say, we let the shark off the hook – so now you know it is out there next time you go for a swim in the Lagoon!!!!! 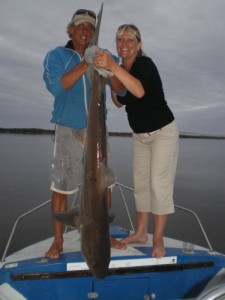