Young Wildlife in the Hills

Young Wildlife in the Hills

News on the painted dog pups, spotted hyaena cubs and a rather peculiar twist in the tale of our hippo “mother” and calf…

The painted pack of 12 dogs is faring remarkably well and much to our delight even ventured back onto our traversing area this week.

Their nomadic lifestyle now means that they are only here periodically and there is considerable excitement surrounding their sudden appearance when we are able to monitor the development of the 4 and a half month old pups. Hopefully some pictures of the growing pups will follow shortly.

I mentioned in the rangers report that the spotted hyaena female could decide to move dens at any time and this is what seems to have happened, there has been no sign of the mother and the 5 month old male cubs for over 2 weeks.

Clans use particular den sites for years whereas others may use several different dens within a year or even several den sites simultaneously. These may be separated by up to 7 km so until we find another den here are some pictures of the last month’s superb viewing. 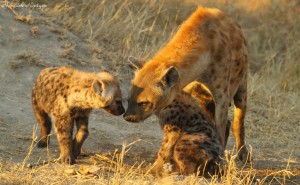 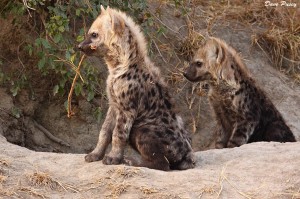 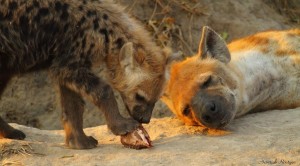 We have witnessed some peculiar behaviour from the “female” hippo with the calf recently. There has been constant grunting coming from the waterhole close to the lodge in the early mornings and evenings as well as prodigious markings and dung splattering around the waterhole… behaviour typical of dominant bull hippos.

So here is the strange twist… a young bull hippo seems to have “adopted” the 7 month old calf which follows him around everywhere. We were confused for a while as he is a similar size to the mother and we just assumed the larger animal to be her, reminding us all that the bush doesn‘t allow for assumption but always to LOOK CLOSELY.

Young bulls and females can look very similar, have a look at the picture below of the dung splattering on the back and rear of the young bull in the picture below as well as the wide muzzle which are a characteristic of bulls. 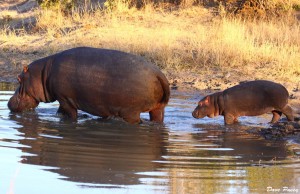 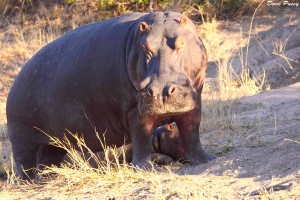 I can‘t find any text of this happening before and we are all asking questions as to why? Did the calf stop suckling early? How long has the calf been with the bull? Why did he adopt it?

Usually calves are fully weaned by about 8 months however a young hippo begins to eat grass at about 3 weeks so it is possible that the calf is surviving on grass alone!If anyone has any theories or has heard of anything similar please share!

4 thoughts on “Young Wildlife in the Hills”