Time Runs out for the Sand River Male

Time Runs out for the Sand River Male

We have all been waiting and hoping the young Sand River Male would eventually make it and join up with the Othawa Pride, alas this was not to be.

The Othawa Pride, accompanied by one of the large Mapogo Males brought down an adult Giraffe and were on the kill for over a week. At some stage during the feeding frenzy, the young Sand River Male joined them at the carcass as he has done quite a few times in the past.

As we have reported before, this is not the first time this has happened and he has been under the protection of the Mapogo Male, or at least that is how it has seemed before. This time he was looking extremely thin, and battled to even muster the energy to approach the carcass. He lay down close to the kill and seemed to go to sleep.

The next morning he was lying in exactly the same position and it became apparent that he had died sometime during the night. There were no physical injuries apparent, and we can only assume the energy expended in locating the carcass was too much for him.

A very sad end for a young male Lion who had the odds stacked against him for so long. The demographics of the Lion Prides have changed dramatically over the last few months, and we are convinced this has been a direct result of the demise of the Sand River Pride. The void left by this pride is being filled by Othawa Pride, moving more and more west north and south of the Sand River. The Ximungwe Pride have moved further north from their usual haunts in the south and seem to be taking up occupation in the central area, and a new Pride had moved into the south, the Sparta Pride which consists of 12 Lions, two adult females, 1 large male and 9 sub adults ranging in age from 12 months to 18 months. This Pride has moved in from the east and it is a magnificent to watch this Pride out on the hunt.

We salute the courage of this young male Lion.

Thanks to Marius for the use of the picture. 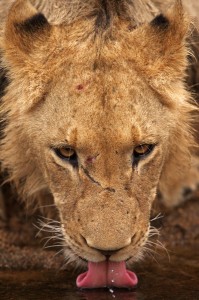 0 thoughts on “Time Runs out for the Sand River Male”