It was been a long and hard road getting to this point, but as of this morning, Makwela and her last remaining cub are back, with a little help from their friends.

Since I last reported back to you, there have been many ups and downs with regards to Makwela and her cub, and it is amazing how many people have been touched by this saga and are desperate for news.

We held an emergency meeting five days ago with the Lodges in the Western Sector to strategies ways in which we could resolve this issue to the benefit of all concerned. We unanimously agreed that our first priority was our responsibility to the Local Community; their safety is always our primary concern, and coupled with this, our responsibility to Makwela and her cub, we needed to come up with a plan to get them back, time was running out for them, and there is no question in my mind it was a matter of time before they would both meet an untimely end.

The terrain outside, up in the hills, is a very difficult place to walk, let alone try and dart a female leopard and her cub, there are just too many places for them to hide up in the rocky outcrops and caves. Seeking advice from the Veterinary Services in the Kruger National Park, it was suggested we use a large cage with a trap door, and try and lure them in with bait, commonly known as a predator trap. Once we managed to get hold of one, this cage was transported half way up the mountain, and left in a place where the freshest tracks had been located. It was a very long shot as neither Makwela nor the cub had been sighted for a couple of days; we had to go on what the tracks told us. Once the trap had been set, our colleagues from Ulusaba sat vigil at the base of the hill and waited.

Amazingly at 23h00, that night, the cub entered the cage and sprung the gate, and Makwela was seen sitting up next to the trap looking amazingly relaxed. I was called out at first light that morning, and from a vantage point, could quite clearly see the cub in the cage, with Makwela actually sitting on top of the cage, both looking quite unconcerned. Once again we were faced with a dilemma, we had the cub, but we still needed to get Makwela. Walking up onto the mountain to try and dart her was not an option, the only choice left to us was to put another cage next to the where the cub was caught in the hope she would be enticed into it, a log shot, but worth a try. Carrying the second cage up the mountain and placing it next to where the cubs cage was a hair-raising experience, knowing Makwela was somewhere close by watching us from the safety of the dense bush. The Last thing we needed was for her to charge out the bushes at us while we positioned the second cage, not something I was eager to add to my list of close calls.

Fortunately everything went to plan and the second cage was now in position and baited, all we could do now was retire to the base of the mountain and wait. Again personal and colleagues from neighbouring Lodges sat vigil. I had a report that evening that Makwela had come out of hiding, moved down the mountain to the second cage, and without hesitation, walked directly into it. It was jubilation when she appeared and entered the trap; shortly followed by huge disappointment when she walked out again when the mechanism malfunctioned………….it was an all time low as she disappeared into the bush with the bait. Being too late to rebate the cage, the Team had to wait till morning to move back up the hill, giving them an opportunity to give the cub water and ensure it still had a good supply of meat in the cage.

Although the cub had now been in the cage for a second night, it was looking surprisingly healthy, but despite this, we all know this would be the last chance to get Makwela, time was running out and we were running out of options. As evening closed in there was an air of anticipation, trepidation and many a prayer was said around the fire that night. With the wind howling and a blanket of cloud cover, the night was dark, it would be impossible to hear if the trap had been sprung, everyone would have to wait until first light to see if the plan has been a success.

As dawn broke this morning, imagine the feelings and the sense of jubilation, there in the cage next to her little cub was Makwela, pacing up and down, and by all accounts not too happy to be there, we had them both. It was time to move quickly, and to cause as little stress as possible, both were tranquilized and moved off the mountain as soon as they went to sleep.

We chose a place in the south called Wallingford Dam, many of you will know this location, it is far enough south that is an area the Tegwane Male Leopard has not ventured into yet, but it is still part of her original territory, a place she knows well. I left there an hour ago as mother and son, yes it is a male, were waking up. We have a Team watching her constantly until she is fully recovered from the sedation and monitoring their progress closely………the next few days will be critical and every effort will be made to make sure she does not venture out of the Reserve again, although this is easier said than done. The particular area she has been leaving the Reserve has been secured as best we can, but time will tell whether we have been successful in this feat or not.

We have deliberated long and hard about what the best course of action would be should we get to this stage, and we have looked at all the options available to us. There is no doubt she left originally due to the new male taking over, and if she didn‘t have the cubs she would have had no reason to go out. However over the last few weeks she has been returning on a regular basis, we believe not to hunt as she has been claiming food outside. We believe she has been returning to see if it safe to bring her cub back, to a place she has knows so well and a place she wants to be. It was mentioned but never really contemplated as an option to take her cub away from her, that is not our right to do, we must give them the best possible chance together, and by all accounts, if she gets through the next few weeks to a month, the cub will be of an age that it might well be safe, even if there is an encounter with the new male, so long as submissiveness is shown, certainly this is what the experts believe, we shall wait and see.

There are just too many people to thank for all the help and assistance they have put into this operation, it has been a huge Team effort. In particular to Karl and his Team and Willem and his Team, it is efforts like this when everyone pulls together for a common interest that I realise that the Western Sector of the Sabi Sand Reserve is an even more special place to live if that is possible.

The pictures below were taken this morning as mother and son were waking up from the tranquilizers, a little “groggy” but looking in good shape. Thanks to Louise for the pictures she took of Makwela and her son just under an hour ago. 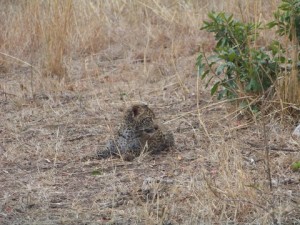 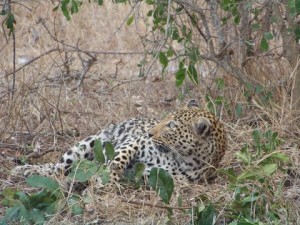 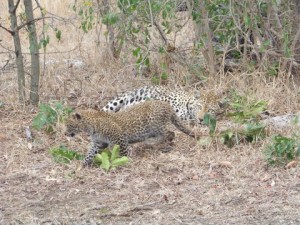 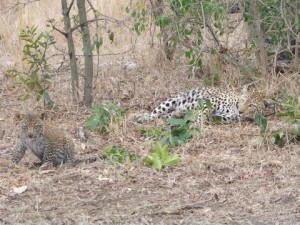