The Passing of a Legend

The Passing of a Legend

It has been over a month now that we have not seen sight or sound of Makwela, and as every day has passed, the outcome has looked more and more bleak.

Her daughter, the Hlaba Nkunzi Female, has over the last six months been putting pressure on her and has steadily been pushing her or out of her Territory. This in itself is not an unusual occurrence, we must remember that Makwela is now classified as an old female; we estimate she must be at least 15 years old, if my memory serves me correctly, I first had the privilege of viewing her in 1996 when she had just become independent of her mother.

This pressure over Territory resulted in Makwela being pushed more and more west out of her core Territory and back to a place we didn‘t want her to be, the Western Boundary of the Reserve. Those of you that are familiar with Leopard Hills, and avid readers of our blog, will know why this is of so much concern for us, she has left the Reserve before and is very familiar with the Hills just outside. For the last month we have been keeping an ear close to the ground for any possible sightings of her outside the Reserve, and for us no news was good news, however, the fact we were not picking up her tracks inside, was continuing to cause great concern.

A week ago we received an unconfirmed report that a female Leopard had been shot by a local villager in an adjacent Community surrounding the foothills, outside the sanctuary of the Reserve. The news came as a huge blow to all of us, but as these were unconfirmed reports, we still had hope and have spent the last week trying to get as much information as possible to confirm or dismiss these rumours coming through the “bush telegraph”. I was very reluctant to post any news until we had more information, and I appreciate that so many of you have been concerned and asking after her well being, I therefore apologise to you all for holding back on this, it was done with the best intentions, I wanted to be in a position to deal with facts and not fiction.

However having said that, we are no closer to getting all the facts as to whether these rumours are one hundred percent correct. The information we have from the Local Community is as follows:

• It is pretty certain that a Female Leopard was shot outside the Reserve, it seem she was in a close proximity to one of the Villages when the incident occurred, having come down from the foothills in search of food.

• It seems that this incident took place about a month ago, which is around the time we suspected Makwela had gone missing and had not been seen around her usual haunts.

Due to the incident taking place about a month ago and us only hearing about it last week, has left us with the problem of not being able to categorically confirm whether this Leopard was indeed Makwela or not, there has been no physical evidence produced, nor is there likely to be due to the delayed time period.

Being an eternal optimist, even I am finding it hard to put two and two together and not come up with four, the timing, the location and the circumstance are all pointing to the fact that Makwela is no longer roaming the bush where we have come to know her so well.

Personally I would much rather have not known what happened to her, she was coming to the natural end of her life, these rumours have left me feeling cheated for a reason I cannot explain, I just so wish she could have lived out her last remaining time in and around her old hunting grounds, it seems this was not to be.

We also cannot attach blame to the individual who shot this Leopard, he did not know her, if it was Makwela, as we did, and he would have had an obligation to his village and livestock. Many have and will want to vent frustration in this direction, I ask that we don‘t.

There are so many what if’s” surrounding this incident, but none of them will bring her back. I am left with good memories and some stunning pictures from over the years, she was part of our foundation, literally and figuratively, many will recall she was born in a cave under where our present day kitchen is built today.

We will all deal with this news in our own way, and without trying to sound melodramatic about it, mourn her passing with different tributes. For me and so many of our repeat, passionate guests who got to know her so well; it will be memories of a small female leopard with a big heart, and a distinctive scar on her nose. She was a legend, and the legend will live on in her off spring, especially the Hlaba Nkunzi Female who now roams the Territory Makwela made her own. She is so like her mother in so many ways, she comes from strong genes, and I will always remember her mother every time I see her in and around the Lodge, which she often is.

I will leave you with a few images of the good times we have shared with Makwela, and there have been so many of these, in fact too many to count.

I have asked Marius and the Rangers Team to post a separate article for this blog with some of their images and times they have spent out in the bush with a Legend we came to know and love as Makwela. 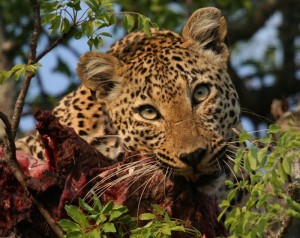 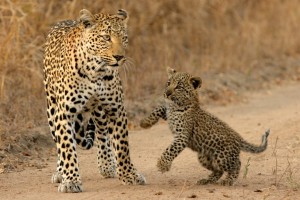 0 thoughts on “The Passing of a Legend”