The Last Remaining Sand River Male is surprising everyone

Since the demise of the Sand River Pride at the beginning of the year, the one remaining young male seems to be hanging in there.

I have been holding off for a while on commenting on this situation until we had an understanding of which way this was going to go.

The one remaining Sand River Male has been surviving on a meager diet of tortoises, rodents and smaller game which he has been managing to catch. He has been spending most of his time in the old territory, but also venturing further east which is territory held by the Ottawa Pride. It was a matter of time before he was going to run into them, and this indeed happened not too long ago, the events that followed have not only amazed us, but have also once again showed proved that there are no rules written in stone.

On the morning in question, the young Sand River Male inadvertently wondered quite deep into Ottawa Territory and literally head first into the Ottawa Pride themselves. The two adult females of the Ottawa Pride, and some of their juveniles immediately set upon him, and we were convinced he was going to be killed. Amazingly he didn‘t back down, instead he lay on his back in a posture of submission and took the onslaught. Then the incredible happened, one of the Large Male Lions from the Mapogo Coalition arrived on the scene and drove the Ottawa females off and lay down next to the Sand River Male, as if to protect him. Every time the Ottawa Females tried to approach the young Male and attack him they were driven off by the Large Male. This continued for a while until the Ottawa Pride moved off, followed by the Large Male, and yes you guessed it, the young Sand River Male tagged along behind at a respectful distance.

A short time later, the Ottawa females managed to bring down an Impala, and once they had made the kill, were immediately driven off by the Mapogo Male who would not allow any of them close to the kill, except the young Sand River Male. Although he did not feed on the kill while this amazing situation was been observed, there was evidence later that he had managed to get some scraps off it. The Ottawa females later went on to kill a Wildebeest during the night and again there was evidence that the young make was still in the vicinity, and again has managed to gain some sustenance from the kill.

The question needs to be asked, why the Sand River Male is putting himself in danger by trying to gain entry into a Pride that he is not related to, and why is he being protected by one of the Mapogo Males. Firstly, he is the son of one of the Mapogo’s and this relationship will be realized, but history tells us that this is not justification of the Large Males behavior, as the Mapogo’s also fathered the Othawa juveniles as well. There could well be an element of desperation, and the survival instinct that is ever present has kicked in, overshadowing feelings for his own personal safety. I am not pretending to be an expert on these matters; I can only report behavior as we encounter it, and I am also sure everyone has their own personal theory as to what is going on here. I guess time will tell and we will keep you posted on the Sand River Males progress. I for one am routing for him, and hope he surprises us all by living a long and fruitful life, thereby in time, passing the Sand River genes on to future Prides within the Reserve.

The last time he was seen was a couple of nights ago, and although looking thinner that he should do, and once again, for the time being, on his own, he is still maintaining. There are very few people who would have given this particular Lion any odds on surviving on his own after the demise of his Pride, myself included. And although he is not out of the woods yet, there is a long hard road ahead for him, who are we to say that he won‘t make it, after all, he has surprised us all thus far, and best we not forget, it is Sand River Blood that is flowing through his veins!! 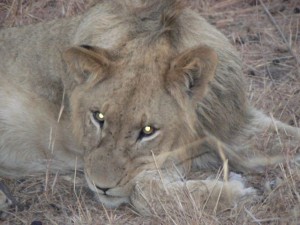