The Hills are full of Leopards this morning!!

The Hills are full of Leopards this morning!!

I was out doing my rounds early this morning, minding my own business, enjoying the first cup of coffee of the day, and then, suddenly, the Camp was full of Leopards!!!!

Walking on route from the Library to the Reception, I caught a glimpse of a long “cat like” tail disappearing into the Boma. Was it imagination and lack of caffeine this early in the morning, or was there something lurking beyond the Boma wall? I attentively approached the entrance and peered around the corner, all was still and there was nothing visible. Looking down at the Boma floor, there in the sand, crisp from the heavy morning dew was the unmistakable pug marks of a young female leopard, for once in my life I didn‘t need a Tracker to tell me how fresh they were, the Hlaba Nkunzi female was back.

I stood still and waited, scanning the Boma for any sign of movement; she had to be in there somewhere. And there she was, a feline head popped up from behind the buffet serving area and stared at me across the Boma, an area which suddenly seemed a lot smaller than I remembered. Those penetrating eyes boring right through me, she didn‘t make a move except the occasional flick of her tail. Her demeanour was not threatening and she lost interest a long time before I did, she turned away and sauntered out of the back entrance of the Boma, not away from the Camp, but as if to make the point that this is her place, she walked slowly into the middle of the Lodge, and down the main pathway towards Room 4.

Ironically our Guests in Room 4 had decided not to go on the morning game drive and were relaxing in their Room, a quick radio call to reception who in turn phoned to inform them that she was on route, and that it would be a good idea to move off the deck and close the sliding door. As if on queue, not three minutes later, the Guests phoned reception to say she was drinking out of the plunge pool on their deck, they were having an incredible sighting.

I hadn‘t even returned to the office when our Restaurant Manager Steve Shabangu radioed to say there was a female leopard and cub on the deck next to the bar area, we knew it wasn‘t the Hlaba Nkunzi female as she was still drinking at Room 4, it had to be Makwela and her cub. We got up onto the main deck just in time to see her and the cub disappear over the rocks between Room 8 and the kitchen, moving down towards the Staff house at the base of the hill. We got around there just in time to see her emerge from the rocks, without the youngster, and move off down towards the riverbed in front of the Lodge.

And all this before breakfast………………..oh I almost forgot, how was your morning?

Thanks again to Gary for the pics, always pays to have your camera on hand at all times. 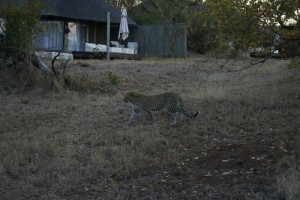 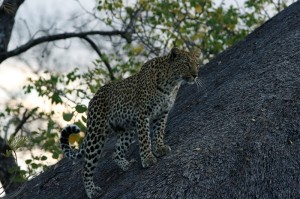 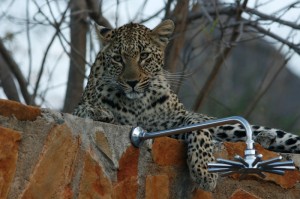 0 thoughts on “The Hills are full of Leopards this morning!!”