The end of a life before it really even started

The end of a life before it really even started

Waking this morning to ominous black clouds and heavy rain, little did we know this was not as dark as it was going to get as the day progressed.

On his way back from the airstrip Dave encountered the Hlaba Nkunzi Female Leopard running rapidly north past Tawny Eagle Pan, followed closely by the Xinzele male Leopard hot on her heals. She managed to get away and Dave followed the Male as he turned back to from where he came, towards the Mabrak River that runs in front of the Lodge. As he went down into the river bed which is flowing after all the heavy rain we have had, he continued to scent mark vigorously, wading across the river to the Southern Bank. It was at this stage that Dave and Gary notices a young dead Leopard lying in the branches of a tree overhanging the river bed. The clarity of the situation dawned that he had surprised and killed one of Hlaba Nkuzi’s youngsters while marking his new territory, needless to say we are greatly saddened by this turn of events, ironically it almost a year to the day that she carried her cubs into the Lodge in the early of the morning during a tremendous thunder storm, they were no more than three days old.

No doubt there will be criticism to showing human emotion over an incident that is a natural occurrence, you can‘t blame the male, he was just doing what comes naturally to him. However we live, sleep and breathe this daily, and if anyone wishes to criticize us for being “human” then quite frankly go ahead.

I have added the picture below as a blog should be about the whole story, but I appreciate that not all will want to view it, therefore do not scroll down further if that is the case.

We will keep you posted on the situation with Hlaba Nkunzi and the remaining youngster as soon as we know what is happening.

Regards for now from a very sad Leopard Hills Team. 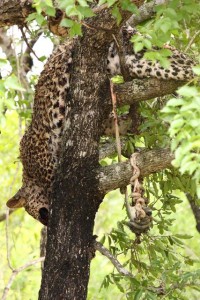