Hlaba Nkunzi and Xinzele
These leopards have been spending lengthy periods of time together since he killed her second cub 2 months ago. Hlaba Nkunzi has followed Xinzele deep into his territory, all the way up the western side of the reserve and up to the Sand River then back east towards Leopard Hills.

Last week they visited the lodge together and strolled straight through the boma, around the library and onto the path of suite 2 across suite 1’s deck and then through the rest of the lodge.

After visiting the lodge they spent a few days together before going their separate ways again. Xinzele is resisting Hlaba Nkunzi every time she approaches him, there was no mating observed during this time.

See further info on mating behaviour at the end of the report. 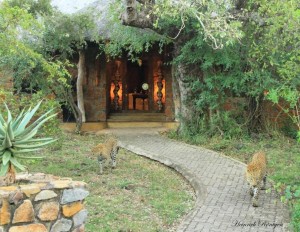 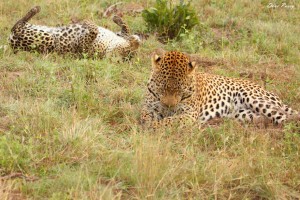 Tlangisa
She has been seen more frequently in the middle of the western sector where there is a vacant territory left by the death of Makubela last year. Metsi also seems to be pushing further south and east into Mambirri’s old territory with her 2 ravenous young male cubs to provide for. We have seen Tlangisa being chased by the more mature and experienced females, Hlaba Nkunzi in the north and Metsi in the south. Tlangisa is always so playful and uses trees as vantage points more than the other females, such a beautiful relaxed female even in this taxing time as she tries to establish herself and claim a territory. 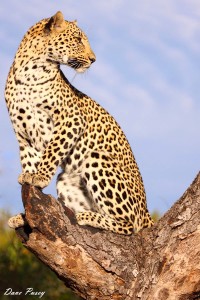 Metsi and cubs
Metsi killed an impala close to the new airstrip during the month where they all spent a few days, both cubs very relaxed and moving around – but not out of mother’s view. This provided fantastic viewing as they were up and down a Marula tree, they have not been seen much since then. As mentioned Metsi has been spending more time quite far south in Mambirri’s old territory, most likely she needs more space to provide for the 2 demanding young males who are now a year old. Both cubs are looking healthy and doing very well. 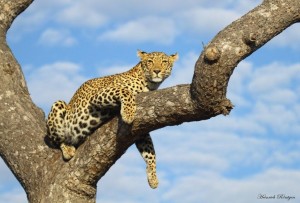 Ximungwe Pride
Wonderful news is that another of the 5 lionesses now has 2 confirmed cubs estimated at 2 weeks old. We had a brief glimpse of her carrying the cubs in her mouth before the area had to be closed off until such time as the cubs are older. This leaves 3 females with 2 cubs each (6 in total) and the other 2 lionesses possibly pregnant and still mating with the Mapogo Coalition. The older lioness with the 9 month old male cubs has been mostly in the south while the short tail lioness with the 5 month old cubs is doing well and we have been seeing her regularly around the lodge. They have been vocalising repeatedly with the Coalition and asserting their dominance in the west! 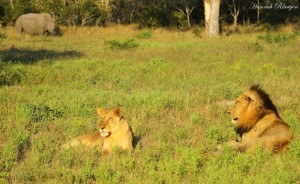 Mapogo Coalition
The 3 ageing males have been spending much of May contesting for mating opportunities with the 2 Ximungwe lionesses that don‘t have cubs as yet. Lion mating behaviour is always fascinating to watch and our guests have been spoilt this last month. Even though they are getting on in years their vocalising is louder and more ear-splitting than ever, the Majingilane coalition in the east will be listening intently and under no illusion who still rules the west. 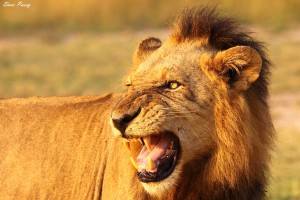 Cheetah
Makamisa, the veteran hanging lip male has not been seen since the beginning of May when he was down in the south proudly surveying his territory from atop the large termite mounds. He has this habit of disappearing from time to time and then when we least expect it…he indulges us with his presence! 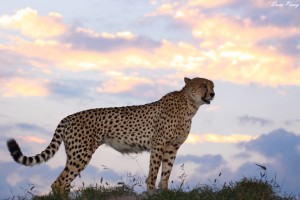 Elephants
As winter sets in and the seasonal mud pans begin to dry up we are enjoying a higher concentration of Elephants along the perennial rivers and permanent waterholes. This provides us with ample opportunity to time our drives with the animated arrival of a Parade at the water’s edge and enjoy all the ensuing interaction and excitement. 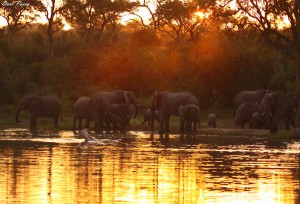 White Rhino
As usual the sightings have been regular and of high quality, lots of wallowing and interaction in the mud pans. We have seen the female with the young calf a few times and she has become rather relaxed, enjoy the images below. 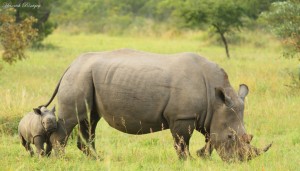 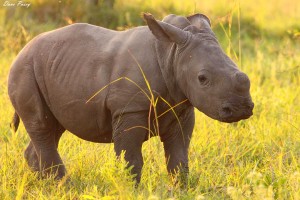 Buffalo.
The large herd of 500 has been here a lot during May and we have spent some quality time in the heart of the herd. One morning we managed to see some males jostling over an oestrus female for ages near a waterhole and then suddenly to all of our surprise an old grey male appeared and showed all who was boss. Go grandpa! 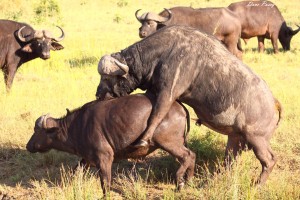 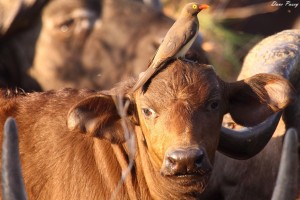 Painted Dogs Denning
The 8 pups are now 7 weeks old and faring extremely well, it is astounding how fast they are growing and developing from the tiny black and white floppy eared critters that emerged 3 weeks ago.

Marvel below at how rapidly they have developed since we first saw them 3 weeks ago! 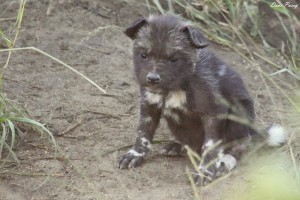 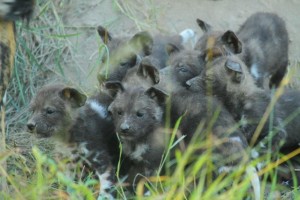 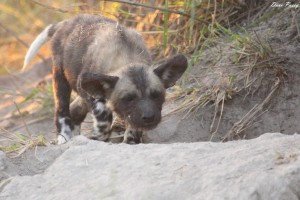 Remember that they are born helpless with their ears and eyes closed, they are born black and white, the tan and beige colour comes later. The Alpha female feeds them nothing but milk for the first month of their life. They then begin to eat solid food regurgitated by other pack members at about 4 weeks old when the pups also begin to wander around outside the den.

Wild dog pups are usually weaned by five weeks. By seven weeks they begin to develop their adult coloration and body shape. When they are 10-12 weeks old, the pack leaves the den area to go into another area of their territory so they will probably remain at this den site for another 3-5 weeks. We have had a few close calls with lions moving close by but the Alpha female is an accomplished mother and the pups are in good hands.

With all the hungry young mouths to feed we have also been frequently following the pack hunting together.

I’ve added a video below to share some of the special sightings we have been having with these highly endangered beautiful painted dogs.
[FMP width=”640″ height=”360″]https://www.leopardhills.com/wp-content/uploads/2012/12/20110530-Dogs-movie.flv[/FMP]

Interesting information: Leopard Mating Behaviour
We have been observing a lot of mating behaviour in the last month due to the loss of both of Hlaba Nkunzi’s cubs so let’s dig a little deeper into this fascinating behaviour.

The mating system for leopards is called overlap promiscuity. Females will mate with dominant males who have an overlapping territory with hers. Hlaba Nkunzi has a central territory in the west so she overlaps with 2 and possibly 3 territorial males (Xinzele, Xindlevana and possibly Kashane)

The average length of time the copulating adult male and female are together is between 2 and 3 days. In this time the female will initiate mating over 95% of the time. She will follow the dominant male around his territory as opposed to hers. We have seen this with Hlaba Nkunzi following Xinzele way out of her own territory and presenting herself to him.

Xinzele seems to be resisting her approaches, quite aggressively at times and hasn‘t been observed actually mating with her. This could be due to her being in a false oestrus due to the loss of her cubs and he may be aware of this! She may be waiting for some stability amongst the males in the area before actually coming into full oestrus and ovulating. She has already been observed mating with the dominant male from the east, Xindlevana.

The mating process is a series of steps:

Start Purr: She begins to purr while approaching the male and wasping, he then joins in purring as he mounts her and this continues until the post copulatory roar of the male.

Wasping: Female moves back and forth in front of the male enticing him to mate.

Lordosis: Female is crouched down, her tail up and forward towards her face, hips elevated

Copulation: Series of thrusts by male, his teeth bared and gently grabs the female behind the neck.

Dismount: Males have a barbed penis which causes the female pain when he dismounts, she usually swipes at him with her front paw and he jumps clear.

Post copulation roll: Female rolls on her back afterwards.

Look out for the below postures when viewing mating leopards or any other interesting behavioural scene. 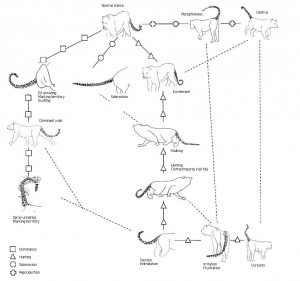