The heavy rains arrived again in force this January, dropping a drenching 170mm in 1 day! A muddy swampland developed for a week or so but thankfully welcome sun dried it out quickly and the landscape is looking breathtaking.

See below image of a handsome giraffe bull in his lush green paradise at sunrise! 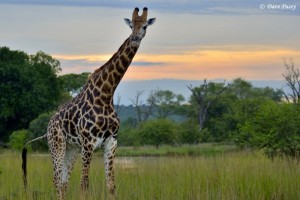 Her playful female cub is now 5 months old and is becoming bolder and bolder. We have been treated to many special sightings involving the ever patient mother and energetic young cub. This young pretender to the throne has a tough act to follow being the next in the Makwela/Hlaba Nkunzi bloodline and she keeps mom very busy, especially as she has no siblings to practice her hunting skills with. 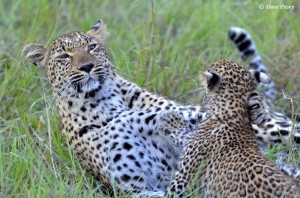 Just a friendly pat on the head, “wake up mom” 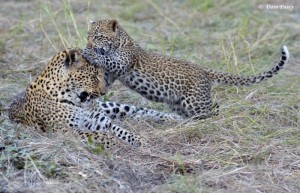 “The protector” holding close with her caring paw the next generation of the fabled Makwela/Hlaba Nkunzi bloodline. 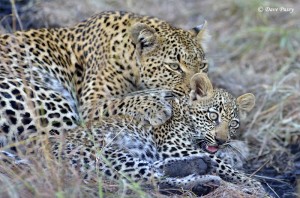 She has chosen to move more east of Leopard Hills, possibly a choice to take the cub to the protection offered by the experienced Kashane male or that Metsi has pushed her east as they are both providing for young cubs and a prime territory becomes ever more valuable.

She has been a bit of a ghost recently, mostly just her tracks have been seen! She did pop up at Leopard Hills access road once and showed her disgust to some impala that were alarm calling at her, see image below. 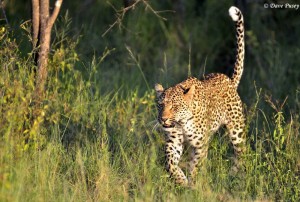 Her cub was seen briefly at month end which is fantastic news and a tribute to the incredible recovery of the Dayone male.

As usual in summer and especially this January with the Sand river raging, she is found very rarely.

After the interaction with Dayone in the previous blog at the beginning of the month he has been seen briefly once or twice. The 2 big dominant males are respecting each others boundaries at present. 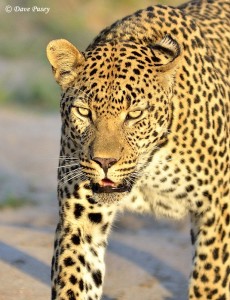 Back from his injury with a vengeance this month like nothing even happened! He has reminded us all just how tough these cats are! See blog from earlier in Jan for some video of his successful warthog hunt!

Here he is patrolling during the month, with his back leg left leg well and truly healed… 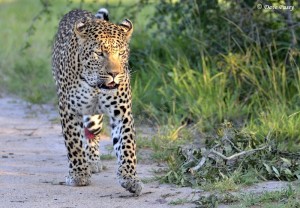 Hard to believe it looked like this in November… 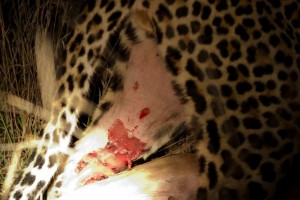 The rulers of the west have had a rather lazy month, spent mostly feeding on their buffalo kills, they have also been introduced to their first progeny by the Ximhungwe lionesses. They faced a brief but unknown threat when the 2 nomadic Sparta/Tsalala males snuck onto their territory way down in the south, killed a buffalo and disappeared as silently as they arrived.

See image below of the healthy young Sparta male, these 2 males are big and strong but up against the 4 mighty Selati’s they dont stand a chance. 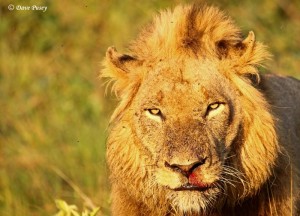 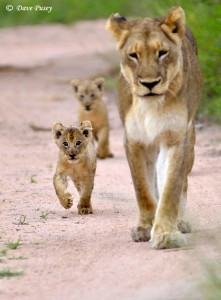 There are 4 confirmed cubs belonging to 2 of the lionesses and a 3rd has visible suckle marks so we will hopefully see even more additions to the Ximhungwe/Selati bloodline soon. The short tail lioness did have 3 but sadly one seems to have disappeared. 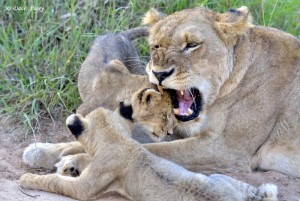 The Othawa lionesses have been with the Selati’s frequently and seem to be enticing them to mate again, seems like their cubs haven’t made it for whatever reason. They are young inexperienced lionesses so this is not too much of a surprise given the stress that the Selati Coalition takeover must have caused.

The growing 6 month old cubs have returned to the den after the flooding sent them looking for a new home for a week or 2.

See blog from the beginning of the month.

All over our traversing area at present.

A rather amusing event unfolded at Christmas with our regular guests, the Nelson’s, when a big musth bull interrupted our drink stop. See lonely hot box with some worried guests hoping he doesn’t smell their bush mix! Luckily he lost interest when a herd of females arrived. Thanks Ankia for the great image below! 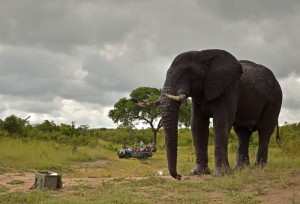 The large obstinancy of +- 500 has made a few welcome appearances in the south as the lush green grazing down on the gabbro plains is just too enticing to them!

The sour plums are in full bloom, here is a CMR (Blister) beetle enjoying the juices! 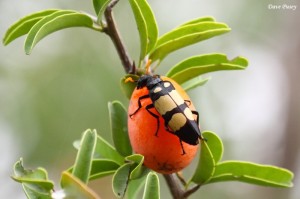 Always watch your back while enjoying a meal in the bush, here a cape glossy starling almost lost his hard fought centipede meal to a sneaky dwarf mongoose. 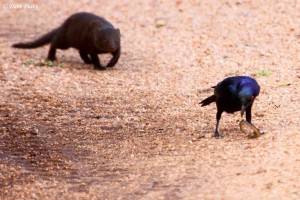 Breeding is in full swing, we managed to find a woodland kingfisher nest and here is the female about to take off after feeding a chick, proudly watched by the male. 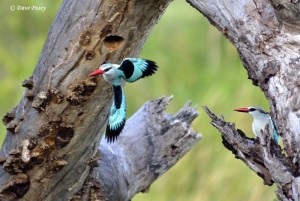 For the birders it is always worth waiting for sundown at a drink stop when these crepuscular and nocturnal feeders come out. Here is a pair of black crowned night herons that joined us for our gin and tonic. 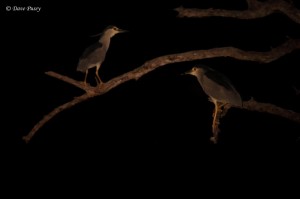 Always interesting to see how animals adapt and survive with deformities, this steenbok male we discovered has a permanent headache but still holds a territory. 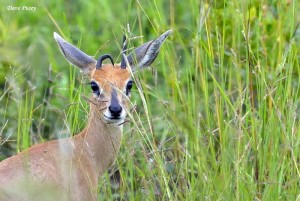 Unusually for this time of year we came across this dead impala that had been impaled in the abdomen by another ram! It was late morning so we waited and within 10 minutes the first vultures descended until it was a feeding frenzy of about 30 scavengers! 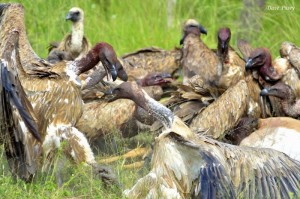