Once again, welcome back to our Leopardhills Rangers report for February 2010. As usual we’ve had an incredible month with regards to our sightings, bothe on drive and around the lodge!!! 5 days ago we had to chase a young bull Elephant out of camp after it had given our housekeeping ladies a bit of a fright. He then decided to stay in and around camp over the next 2 days giving most of the maintenance staff a bit of a run around!

The waterhole in front of the lodge has been teaming with wildlife, with daily sightings of Waterbuck, Kudu, Baboon and of course the ever present Impala. We had the Ximungwe pride of Lions We have periodic sightings around the lodge of Hlaba Inkunzi, the female leopard every 2 days or so. around the waterhole for 2 days or so, with Elephant and Rhino every now and then.

Weather
The weather over the past month as been unpredictable with perfectly blue skies at lunch time and rain 1 hour later. The mercury has been hovering around the 40 degrees mark, with at least 3 days entering the 50’s and an incredibly hot day of 52 degrees Celsius real feel. This crazy heat along with sporadic rainfall has made it very humid and thick to breathe the air, but at least the wildlife and flora around us gets a break from the heat of the day!

Lion
Ximungwe Pride
We have, in the last few months talked about the young female cub that has been dubbed “Super Cub”, and have expressed our worry of her survival within the pride as young as she is. All seems to be going very well and she is bouncy and very healthy. The good news for her is that she may be joined by some younger friends within the next 2 months or so, as one of the other Ximungwe females has given birth in a drainage-line (river system) to the east of the lodge. At this point only one cub has been confirmed and this is due to the fact that we are giving the new borns a bit of space until they are a little older. Over the last few weeks the adults have been seen with a number of kills, the last of which was a Wildebeest to the east of the lodge. 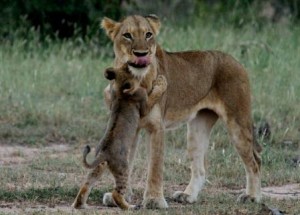 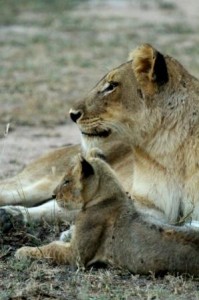 Ottawa Pride
Not much has been seen of this pride lately as they have been hanging around to the far north of the lodge, but 4 sightings during the month have allowed us to view the 4 cubs in really good condition and very playful with plenty of energy and some comical sightings.

Leopard
Hlaba Inkunzi has been in and around the lodge every 2 days or so. She gave us a bit of excitement the other day when she gave a handful of the guests an incredible opportunity of watching her stalking and catching a young female Impala while eating their lunch on the deck. This had the guests forgetting about their midday snack and all peering through binoculars at the spectacle not more than 100m away! No new news regarding her cubs, but it seems like they are still in the vicinity of the lodge and will keep all of you posted regarding their whereabouts.

You can go to this link ( Three Leopards in the Library ) to see images of Hlaba Inkunzi in camp.

The Metsi Female has been seen mating with the dominant Teguaan Male to the north of the camp, providing our guests with rare sightings with much snarling and flying fur. These mating bouts usually last for 5-6 days, while these two were still seen mating 7 days later. Hopefully, with a bit of luck and much anticipation we will be greeting another generation of Leopard cubs within the next 3 months to the western sector of the Sabi Sands.

Mambiri and her year old cub have been seen on a regular bases, with the cub up to her usual antics, being more adventurous and being left on her own for longer periods as mom goes out hunting, has been giving the guests great photographic opportunities as she starts to explore and learn how to be a Leopard has left us with some very comical sightings.

The Teguaan male as mentioned above has been seen mating with the Metsi Female in the 2 weeks. Otherwise he has been up to his usual Houdini disappearing act as he traverses an incredibly large territory. 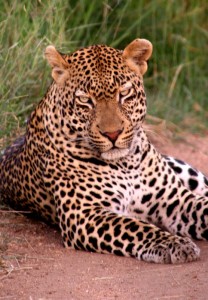 Elephant, Rhino and Buffalo
A large herd of Elephant (70 +) has been seen periodically to the north around the Sand River, although the usual smaller breeding herds of 6-20 animals are more commonly seen as the bush is still lush and there is plenty of water around, so large numbers of small herds are seen on a daily bases. The Larger bulls have been seen regularly, either in small bachelor groups of 2-4 young bulls, with a large bull as their mentor or large loner bulls that tend to have a little bit of a headache from time to time. 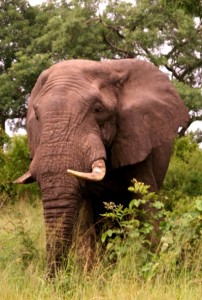 Rhino have been a regular sightings on the game drives, mainly to the south of leopardhills Lodge with groups of anything between 2-6 animals.

There has been regular movement in the south of a large herd of buffalo, numbering in the upper 300’s during the last 3 months. Every now and then we have been lucky enough to have witnessed the birthing of some of the calfs in the herd, which inevitably spring the larger carnivores in to action, with lion and Hyena sightings being quite a regular occurrence. Otherwise there have been great sightings of small groups of Dagga-boys(older bulls) in and around the Sand River to the north and the open flats to the south

Cheetah
Only lately have there been 2 consecutive sightings of the old male Cheetah with the drooping bottom lip around Savannah Camp to the south. He has been keeping away from the open plains and has situated himself in thicker, scrub type bush, making it harder for all the guides to locate him. 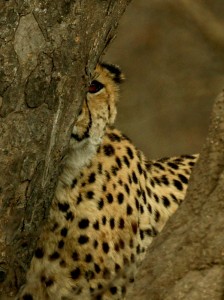 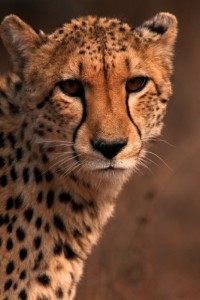 Wilddogs
The Wilddogs have been giving us some brilliant sightings, with Raymond being lucky enough to witness the pack of 6 hunting and catching a young female Impala 2 days ago. They have been extremely mobile, moving up to 30 km in a 12 hour period, and making it very interesting trying to find them again. Even so, we have been seeing them at least 3-4 days out of every 7. 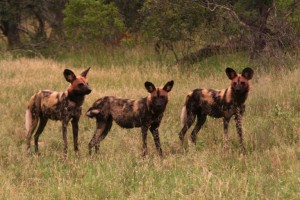 Unusual Sightings
In the beginning of the month my guests and I were fortunate enough to have found the Ximungwe Pride, with the “Super” cub and one of the Mapogo Males on a freshly killed Wildebeest. The young “Super” cub had settled down to suckle with mom, while the large male was content on chewing on some Wildebeest prime rib. We had hardly been there 5 minutes, when we had suddenly heard a high pitched squealing coming from our direct north and only 100m away. My first thought was that a Leopard had taken something, either a Steenbok or a Duiker. My second thought, and to my surprise was that the lions didn‘t react to the commotion barely out of their line of sight, not even a glance in that direction ( lions will and do scavenge off of other predators and are usually drawn towards an animal’s distress calls ). Before my guests could ask what was going on, I had high-tailed my land Rover toward the still high-pitched squeal. It had taken us a minute or so to find what it was that was still in obvious distress, due to its constant calling. Eventually hidden under a bush Ronald my tracker had picked up some movement. When we investigated, we found a young Duiker in the clutches of a 2m African Rock Python. The Python was struggling to get to grips with the Duiker and had only enough body length to rap itself around the lower half of the animal (as a constrictor, Pythons do not crush their prey as is often believed, but rather asphyxiate there prey). The python being to small, eventually let go of the still bleating Duiker and moved a short distance. The Duiker had trouble getting up, I think due to the fact that its circulation had been cut off for a while, its legs didn‘t quite get going immediately., but after about 2 minutes of struggling the little one ran off with no apparent harm done. 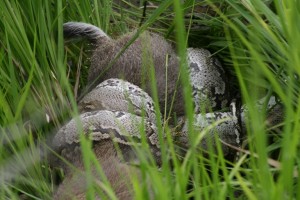 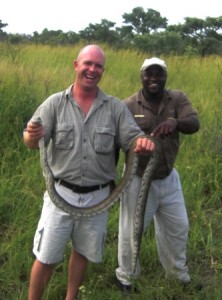 Raymond, a guide that has been with leopardhills since the very beginning, had a sighting at Nkombi Dam to the north( Nkombi is the Zulu and Shangaan name for White rhino) of a single Hyena chasing a small herd of Impala into the water. Hyena are quite at home in the water and will often use this as a tactic when hunting. Impala on the other hand are not the greatest of breast-strokers in the wild, and tend to get taken by Crocodile or Hippo every now and then. For the Hyena this tactic worked out perfectly and he was able to have a wholesome impala fillet for breakfast.

Until next time, keep safe and hope to see or hear from all of you in the not to distant future.