This is the time of year when the bush is most alive, the insect life is audibly abuzz amidst a cacophony of bird and frog calls. Wild flowers bloom everywhere as young lambs and calves have all found their legs and gallop about in the long grass. Read on to see how the young predators are also finding their feet… 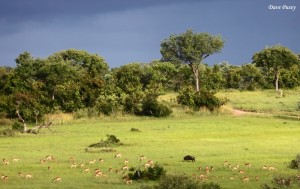 Her playful female cub is now 6 months old and is being led all around her mother’s vast territory to her various kill sites. She confident and a real poser just like her mother. See below.

The cub faced a bit of a scare recently as the young Nyeleti male sniffed out Hlaba Nkunzi’s recent impala kill and surprised them there at the kill site. The cub managed to scurry off to a hiding place while mom growled and distracted the young male who would kill the young cub, given the chance!

Hlaba Nkunzi needs to be more careful around her kills as the scent has the potential to attract many unwelcome visitors…and we must remember this is how she has lost some of her previous cubs! Luckily for the cub, the Dayone male sniffed out Nyeleti the following day and chased him north again!

Here is the ever watchful mother on the lookout for any threat to her precious cub! 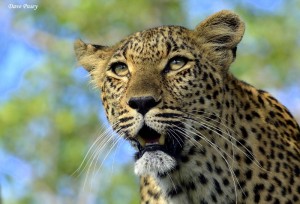 See video for some quality mother and cub grooming time!

Metsi and her cub have been very scarce but seem to be faring well on the few occasions that they have been found, seems like the cub is also a female which bodes well for the leopards in the area. 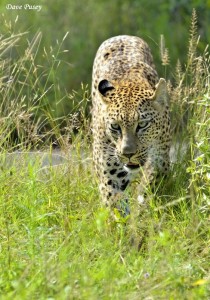 She was found a few more times this month, on one particular occasion she was not too happy when Dayone found her impala kill and proceeded to chase her off and take the spoils for himself. See image below and some video footage. 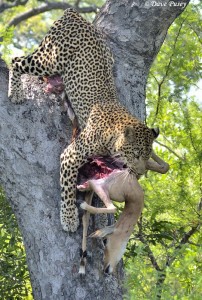 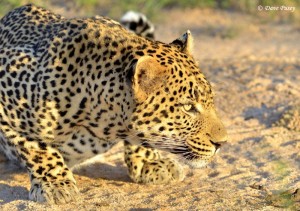 His confident eyes, powerful frame and ever increasing dewlap suggest he is older than his youthful 5yrs & 4mths! He is entering his prime and his fighting character bodes well for the magnificent females in his territory…that is unless there is food involved! I’m sure Xikavi will willingly give up a meal for the security he provides for a new litter. 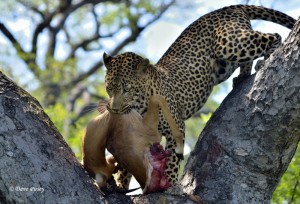 Not seen too often in the west this month, possibly due to Dayone being very active patrolling his eastern boundary since their heated meeting a month ago. 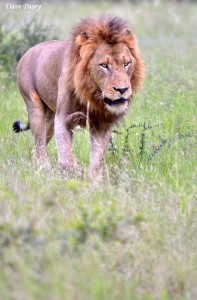 Even the above male with the smallest mane is darkening noticeably as they enter their prime! This male is the biggest of the 4 and seems to be the most dominant for much of the time!

They have been vocalising a lot this month and all 4 have been together, rather than off on their own. See video of one of the boys letting a rhino and calf know who is in charge, there are no better protectors for our Rhino’s than the Selati boys. 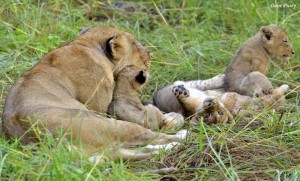 With the cubs being so young the lionesses are not covering much ground at the moment and we are able to find them almost daily. Early mornings and late evenings are always a good bet to see the little ones active and playing around. There are now 7 confirmed cubs between 6 and 14 weeks old! Enjoy the video footage.

Mom taking a quiet stroll presents a perfect target to stalk and attack. 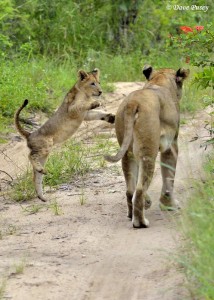 Soggy riverbeds are a perfect playground! 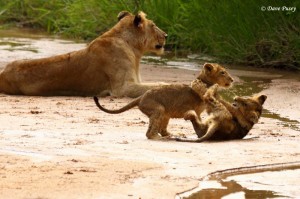 The Othawa lionesses have again been with the Selati boys north of the river recently and seem to be trying to entice them to mate again.

The pack of 8 was seen for a few days of the usual wild dog frenzy during the month! One of the yearlings from last year was separated from the pack somehow and stayed on here for a week by himself looking for his family who had run far east. He has since disappeared so let’s hope he has found them again, a young dog on his own faces many threats out there alone!

Relishing the extra thick green grasses this year, the parades are spread out all over the place, crazy how the largest land mammal can disappear into the undergrowth and be so difficult to find at times.

The large obstinancy of +- 500 has made the lush green grazing down on the gabbro plains their own, there are lots of young calves around as usual in February.

The lush green landscape in front of the lodge has been reminiscent of the Serengeti plains at times, here are 3 different species relishing the good grazing together. 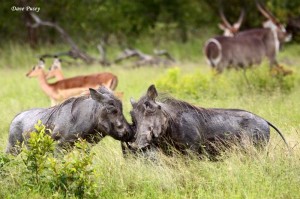 Here is a prime waterbuck bull, the biggest any of us have seen, showing off his spread and courting one of his harem of females. 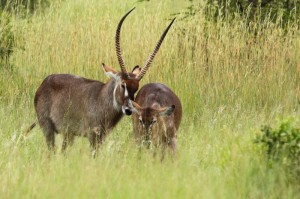 It always pays off to spend time with a parade of elephants and to look closely! Here is a brave mantis, probably saying his prayers, while hitching a ride on a giant pachyderm’s hairy forehead! 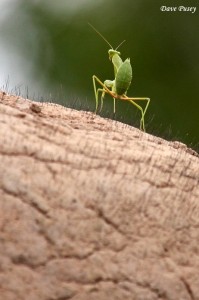 A rare spot for the birders is a european nightjar, especially during the daytime. This is the only nightjar species that roosts lengthways on a branch during the day, other species roost on the ground or on rocks!