Pressure from the East

Pressure from the East

A couple of months ago a new young male leopard moved into our area from the East. According to our neighbours the young feline is the son of a female known as the Xidulu Female.

The young leopard is extremely relaxed with our presence and we have seen the leopard on quite a few occasions. Yesterday morning the male walked straight into camp, but unlike our regular visitors like the Hlaba Nkunzi female and the Tekwaan male he wasn‘t too sure about the new surroundings. 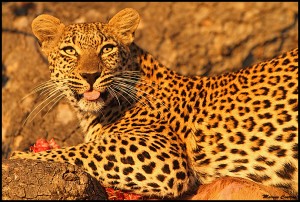 On our afternoon safari yesterday afternoon we had a great sighing of the Hlaba Nkunzi female leopard and her 2 approximately 4 month old cubs feeding of an impala carcass. My first thought as I approached the sighting was that the new male, which was seen close by, poses a serious threat to the cubs as he will kill them to ensure that the female goes back into oestrous and he can mate with her.

This morning Raymond returned to the sighting and on arrival he saw the new male leopard at the kill. One of the cubs was sitting very high in a Marula tree and a second was nowhere to be seen. Hlaba Nkunzi was on the ground snarling continuously at the intruder until he moved out of sight.

Raymond returned a little while ago from the sighting and confirmed that both mom and the 2 cubs were seen together lying in a Marula Tree. We hope that she will be able to protect her cubs and that they will grow up to adulthood.

0 thoughts on “Pressure from the East”