In the early hours of this morning we got a call from Marius and Vanessa to say the Hlaba Nkuzi Female Leopard was on the roof of their house.

Louise and I made our way tentatively from our house, through the garden, trying to see which way she had gone.

The cubs were playing on the Verandah of Vanessa and Marius’s house, having a wonderful time while their mother paced up and down on the roof, quite a daunting experience for the occupants who had woken to hear the sound of footsteps padding up and down just a few meters above their heads.

We watched as the mother moved down onto the verandah where she had stashed the cubs nearby in the bushes, and proceeded to hunt a male impala who was completely oblivious to her presence and sauntered past. Being in the security of the building, we had a grandstand view of her, not even a meter in front of us through the window, as she got ready for her stalk.

The impala, sensing something was not right, made off into the bush, and the Leopard decided not to follow in pursuit, rather to spend the rest of the night in and about our communal garden, giving most of the residence a sleepless night. 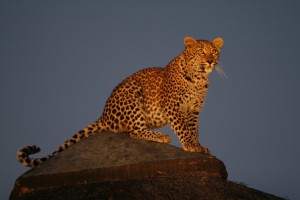 0 thoughts on “Lodge Under Siege”