(This article was written by Louise and my 10 year old daughter while out on drve with Gary. It is wonderful to see the experience through her eyes. All the pictures in this article were also taken by her).

Elephant Herds, Cheetah, beautiful sunsets, and being stuck in the mud…..Gary knows how to show his Guests a good time.

I was lucky enough to spend the afternoon drive out on Safari with Gary and a regular guest his name is Frankie and his friend Adam, there was also two honeymooners named Ashley and Robert. It was quite an experience, as all drives with Gary are.

We left Leopard hills at 4:15 and headed out we drove to a place where a male leopard had made a kill, it was hanging in a tree as we drove through. We look and looked but there was no luck there, no sign of him, so we drove in another direction and we saw waterbuck and wild beast on route. We were driving down a road and we smelt the pungent scent of elephants up ahead. We drove up and we saw an Ululapa game drive vehicle there already. It was June a tracker that used to work at Leopard Hills. We sat with them for a while just enjoying the fresh air and watching the elephants pass by. Gary heard that there was a cheetah closed to where we were, so we decided to leave the elephants in peace. On our way there we saw yet another herd of elephants, we carried on and saw a land rover, so Gray drove up there.

We saw some spots in the grass, a cheetah was lying there. June was also there as well, so we parked close to where he was. About 10 minutes later Gary looked over at June, he told Gary that he was stuck in the mud because it had been raining heavily the night before. Gary told us that we had to go and help June out but the cheetah was still lying close by to where the land rovers were parked. Gary slowly drove around to where June was, and guess what, we got stuck there too! Gary radioed another ranger on drive, who was nearby, and 10 minutes later they pulled in behind us, and all the guests were so happy to see the cheetah. The Ranger asked Gary if he had a winch, but our land rover did not have one, so the other land rover had to go and get one from their camp.

As they left, the cheetah got up and moved away. All June’s guests could now safely get off the land rover, and we started to push it out, but no luck, the land rover was too stuck and we could not do it. In the nick of time the other land rover was back and they had the winch with them. We all jumped for joy as they attached the winch to the land rover they pulled and pulled but it was too stuck. We had to use a jack to lift it and make it slide a bit to one side and when it slid the driver took off at full speed and we managed to get it out, Gary, was so excited. As we pulled free for the mud the land rover that pulled us out was now stuck, so when we got him out and we were so thankful to the people that helped us.

We drove down the road about 5 minutes away from where we were stuck. I sat there with a drink in my hand I thanked God for letting me live in the bush with all the wonderful things I have, and all the wonderful people I had around me. As we drove home there was the most amazing sunset I have ever seen in my life I took some nice pictures.

As the sun disappeared and darkness set in, we saw another herd of elephants and a Civet Cat as it ran across the road.

It was a wonderful night and I really am looking forward to my next Safari with Gary. 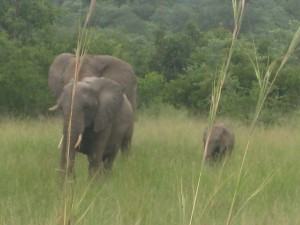 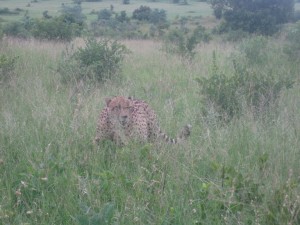 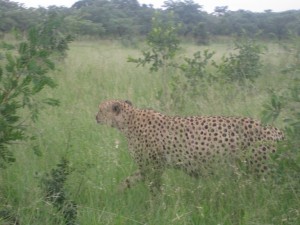 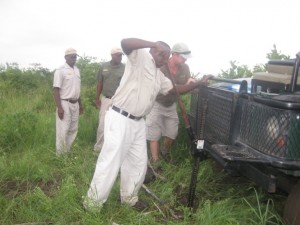 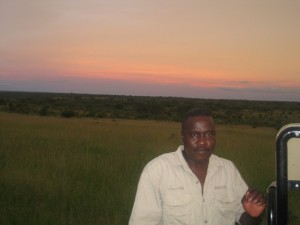 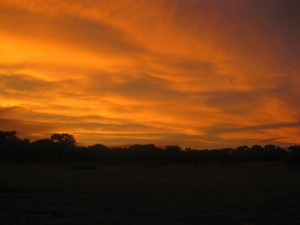 0 thoughts on “Game Driving with Gary”