It finally happened, on bended knee somewhere in the deserts of Dubai, Marius popped the question.

Louise and I and the entire Leopard Hills Team would all like to congratulate Vanessa and Marius on their Engagement.

Over the years, Marius and I have spent a lot of time together in the bush, and had a few adrenaline rushes along the way, but by his own admission, this was the scariest moment he has ever had out in the wilderness……………But there was no need in the end, Van said “YES”!!!!

Well done to you both. 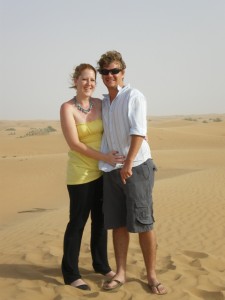 0 thoughts on “Congratulations Vanessa and Marius”