Clash of the Titans

Clash of the Titans

Last night on the extreme Eastern Boundary of the Reserve, there was a clash between two of the Resident Mapogo Male Lions and five new Males from the Kruger National Park.

The Resident Males went to investigate the roaring of five new Males infringing on their Eastern Boundary and walk straight into an ambush. They were surrounded by five Nomadic Males and the fur began to fly.

In the ensuing battle, the two Resident Mapogo Males killed one of the five younger Males and they ran off back into the Park. Not long after the Nomads began to roar again, proclaiming their intent to stick around and their anger at losing one of their coalition. One again the two Resident Males went after them. This time they encountered stronger resistance and a more controlled attack. The resulting fight concluded with the one Resident Males being mauled to death, and the other running for his life back towards the West, we are unsure of the injuries that he sustained, whether they are life threatening or not.

Once the dust had settled, the remaining 4 New Males proceeded to eat the dead Resident Male, unusual behavior but not unheard of.

For those of you who have been here before, the dead male is the one with a distinctive “kink” in his tail. We are still monitoring and trying to get further information at this stage, but it seems that the reign on the Mapogo’s might be at an end. This morning on drive we found two of the Mapogo coalition here in the West, oblivious to the happening during the night way out on the Eastern Kruger Boundary.

We will keep you posted as we get more news; the winds of change are blowing.

The pictures below are not of the fight that occurred last night, but of a previous fight between the Mapogo Males themselves captured by Hannes some time ago, I have added them just to give an idea of the ferocity involved when Male Lions fight.

Thanks Hannes for use of the images. 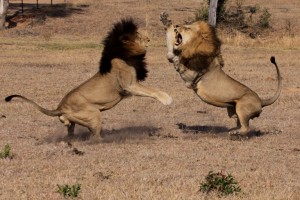 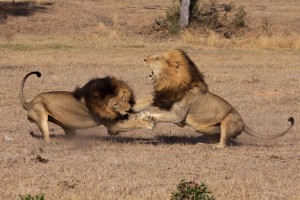 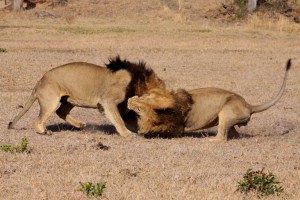 15 thoughts on “Clash of the Titans”