We have a strong suspicion that the Hlaba Nkunzi Female Leopard has given birth.

For the last week, Hlaba Nkunzi has returned from her extensive wonderings and has been sniffing around the Hillside below the Lodge. She has been seen exploring the Ululapa Hills prior to moving across to Leopard Hills, maybe it was the name that convinced her, or maybe it was simply the fact that her Mother Makwela left her here when she was a cub, a place she knows so well and is so comfortable.

The barking of Baboon’s and the chattering alarm calls of the Vervet monkeys constantly warning us of her present as she moves about the Lodge.

I remember well being called by Housekeeping down to Suite 1, to see a bulge in the Hammock on the outside deck, just the tip of her tail hanging over the side. She can‘t have been more than a few months old, but with razor sharp teeth, proceeded to chew her way through the canvass before falling through the bottom and onto the deck below.

I remember too, many years ago, when Hlaba Nkunzi’s mother Makwela had three daughters. She chose Leopard Hills as their “playground” while she left them to go off hunting, and the chaos they caused was extreme. Returning from the evening Safari on Christmas Eve, a “Gala” Boma Dinner had been arranged, the Chefs had just finished setting up and the feast was laid out awaiting our arrival from Game Drive. One last trip by the Chefs up to the kitchen for a last minute necessity, the Boma was only left unattended for 5 minutes…………….Big Mistake!!! On returning to the Boma, what a sight awaited them. There was Makwela and her three daughters on the Buffet devouring the remains of Christmas Dinner, and we had just arrived back from drive with all our hungry Guests!!!! Needless to say a plan was made and our Guests were extremely understanding. Many a drink was consumed under the African night sky, to the sound of Leopard crunching through Turkey bones just outside the Boma wall, while our amazing Team of Chefs whipped up another round, a Christmas Dinner we will never forget.

For the last 5 days, Hlaba Nkunzi has been moving in and out of the Lodge on a daily basis, leading us to believe she has indeed had her cubs up amongst the rocks, returning to suckle. Time will tell for sure, certainly all the initial indications are positive, watch this space for further details.

What is it about Christmas and Cubs? 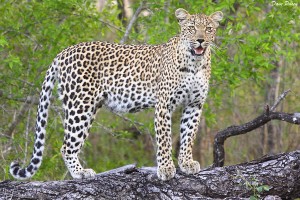