Yesterday afternoon my guests and I saw one of the most amazing sightings I have ever seen in 10 years of guiding.

Shortly after setting out on our afternoon safari Abraham my tracker raised his hand in the air to stop me.

Looking down in the road we saw a massive 3 meter long Black Mamba Africa’s most venomous snake. Unlike previous occasions the snake didn’t move on our arrival and allowed us to view it. We were busy discussing the habits of the Mamba when Abraham pointed out the movement of its tail and that’s when the adrenalin started pumping. We all knew it was busy stalking something hidden in the grass. 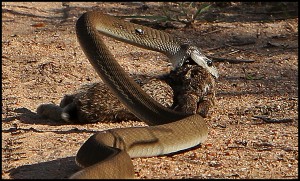 Within a split second the Mamba shot forward and gave a sub-adult scrub hare the lethal injection of neurotoxin venom. The hare shot through the air and snake disappeared. Minutes later it return and slowly but surely started to swallow its prey.

Within 10 minutes the snake swallowed the whole hare and moved off into the thick grass.