Another typical day in the African Bush……….NOT!!!!!

Another typical day in the African Bush……….NOT!!!!!

The day started out like any other, the dawn broke and the bush awoke with its usual sounds, little did we know that we would have an addition to our Team before breakfast.

Having got to the our office at the Lodge at the usual time, enjoying the first cup of coffee for the day, the day was just beginning in its usual fashion………until I had a report from the Housekeeping Department that Nicolette, one of our Housekeeping Ladies was having stomach pains. Due to the fact that Nicolette was about to begin her maternity leave in a few days, expecting her baby in early December, this caused some concern and we decided that it would be a good plan to get her on her way to the gate of the Reserve where we made arrangements for her husband to meet us, and get her off to the hospital to have a check up, just to be on the safe side.

Raymond arrived immediately with the vehicle, and with instructions to drive very carefully as the road was a little sticky after some torrential rain over the last few days, off he went with us bidding Nicolette well.

Twenty minutes later we had a call from Raymond to say he was at the gate and in his limited knowledge on these matters; Nicolette was going to have her baby very shortly. Raymond and I have worked together for the last ten years and I have come to recognise that tone of urgency in his voice when something imminent is about to happen, albeit normally out in the bush when we have been on the tracks of something and he perceived them to be very close at hand. Anyway that was enough coaching for me, while Louise gathered up the medical supplies and fresh towels, I put in a call to the local Paramedic to meet us at the gate, and off we went at break neck speed to the gate.

On arrival at the gate we found Raymond pacing up and down looking as though he had fought off an entire breading herd of Buffalo single handed, I don‘t recall a time in the past I have ever seen him so agitated, and it takes a lot to rattle old Raymond. He informed us that Nicolette had been moved in the gate Guards accommodation where she was being attended to by one of the ladies who live there. Having put on a great deal of speed, Louise and I found ourselves there before the Paramedic, and although we have two beautiful daughters of our own, neither of us had been faced with the reality of delivering someone else’s baby………..

It was with great trepidation that we collected our medical supplies and entered the room; thankfully Louise was exuding confidence while I rummaged through the archives of my brain as to the procedure they would have used on one of the numerous medical dramas that my wife has made me watch over the years.

Miraculously we entered the room as the baby was born, there it was, and the ?stand in midwife? had done an amazing job. Louise gathered the little bundle up in a clean towel and went to work making sure everything was where it should be and that mother and daughter were fine. The Paramedic arrived in the nick of time to check out the condition of Mother and Baby, and I think I walked about looking very important and feeling very proud of myself, only to be told by Louise that had had three of my fingers on one hand pushed into one finger hole of my surgical glove and the other hand wasn‘t much better.

Mother and baby are doing fine and are now in the hospital doing some bonding and getting some much needed rest and recuperation, well done to them both and to the proud father Patrick who arrived on the scene shortly after the birth of his baby daughter.

Thanks to Louise for holding it together and to Warren the Paramedic for his professionalism and for helping me get my gloves off.

Nicolette we wish you and your family well, and we are very proud of you, you did all the hard work and have been rewarded with a beautiful baby girl.

The pictures below tell a wonderful story, Louise with the proud mother, father and stand in midwife, you all did an outstanding job. 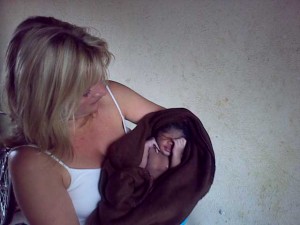 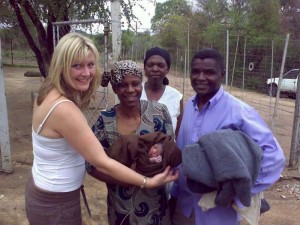