I have just completed a 10 day Safari with some great friends, and boy did the animals come out to play for us!!

It was a pleasure to welcome Allen and Ruth Wolf back with us again on their annual pilgrimage to the “Hills”, joined by Beverly Potter. I also had the pleasure of Tim and Jan Warner, also regular visitors and great friends of ours, joining us on what was to an amazing 10 days in the bush.

If the first afternoons drive was anything to go by, we were in for a treat. We located a male Cheetah on the hunt just before sunset, and we followed him as he cautiously made his way steadily towards a pair of Reedbuck who were oblivious to his presence. To appreciate the thrill of the sighting you have to visualize the conditions and the expectation that hung in the air. The setting sun was perfectly positioned behind the Cheetah and the slight evening breeze was also in his favor. Conditions were perfect for the stalk and the distance between Cheetah and prey was as little as 40 meters, time stood still and it felt like an eternity, which in reality was no more than a few minutes before the Cheetah launched himself into a bust of speed. It always amazes me how quickly this graceful predator can accelerate, from a standing start to 100 kilometers per hour in as little as three seconds depending on the terrain, simply astonishing. The reedbuck bolted and split off in two separate directions, the Cheetah having already decided on his quarry veered to the right and closed in quickly. It was an incredible spectacle, the Cheetah at high speed, a plum of dust trailing behind it as it accelerated towards the Reedbuck who was itself reaching maximum speed, it seemed inevitable it was not going to be enough to get away. The saving grace for the Reedbuck was the decision to risk injury and veer to the right into a rocky section of terrain, and as it did so the Cheetah immediately realize the danger of continuing on at such high speed slowed up and came to an abrupt standstill, watching its potential prey rapidly disappearing into the dusk. We were left speechless for a while, absorbing the spectacle that had played out in front of us, no words could have done it justice, we were just lucky to have been in the right place at the right time to witness one of the miracles of nature unfold in our presence. 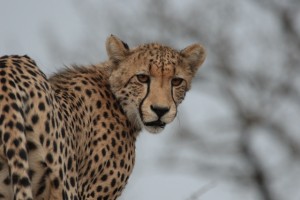 It is very difficult to pin point the highlights of the 10 days, there were too many of them, and to choose one would probably not do justice to the rest, but there were some truly remarkable spectacles that I would like to share.

The evening drive we were crossing the Sand River and encountered the Dominant Male Leopard in the area, the Tegwaan Male. He was out on patrol and moving through some difficult terrain along the fringes of the Riverbed. We managed to stay with him for a while until he disappeared into the thick reed beds, and pre-empting his movements we drove on ahead, fording the River again further east and getting ourselves onto a sand bank where we hoped he might materialize and gain another visual. We sat for about 5 minutes on the little sand bank, surrounded by tall reeds, waiting and hoping. I was beginning to think he had passed us by in the reeds below our position, so I decided to leave the vehicle and take up a vantage point on the river bank about 10 meters from the Land Rover to see if there were tracks passing below us at the water’s edge. As I got to the edge of the clearing and peered over the lip of the sand bank, I was greeted with a heart stopping growl, followed by another, and there below me were a male and female Leopard lying side by side about 5 meters away, crouching low and vocalizing their displeasure at my presence interrupting their courtship. What concerned me most was the fact that this male leopard was not the Tegwaan male; it was another male from the East, the Xinzele Male, not only encroaching in the Tegwaan male’s territory, but mating with one of his females. This left me with the uncomfortable feeling and unanswered question, where was the Tegwaan male, he can‘t be far behind. Discretion being the better part of valor, I inched back slowly and turned towards the vehicle and yes you guessed it, there was the Tegwaan male leopard coming out of the reed beds to my right, displeased at having an intruder in his midst, and certainly not overly pleased that I was in the way. Fortunately the vehicle was closer than he was and a couple of strides placed me back in the safety and comfort of the vehicle. For the next hour we watched an amazing sighting which included the Tegwaan male jumping across the Sand River which began the standoff between the two male leopards, a lot of scent marking and growling, but it didn‘t materialize into a head on fight as we thought it was going to. Eventually both males turned and walked in different directions, seeming to have drawn the proverbial line in the sand. Time will tell but I am sure there is going to be a huge battle between these two mighty cats in the near future. Tegwaan has the size advantage for now, but the Xinzele male has youth and agility on his side, and he also has an attitude advantage, as we saw the next morning, he had not left the area and was still malting with the little female, almost rubbing it in and saying………………..”What are you going to do about it?” 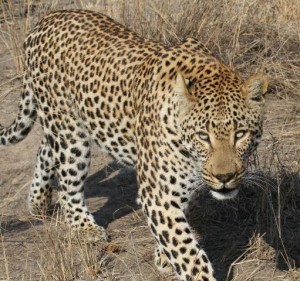 Herds and Herds of Elephant, mainly along the river at this time of the year added to the incredible sightings, and I am sure we must have reached some sort of record seeing 13 different Leopards in the 10 days of Safari, not just seeing them, but quality sightings, really superb. Like watching the Hlaba Nkunzi Female Leopard with her two cubs for hours on end, and seeing the Tai Dam Female Leopards youngster after she had been “treed” by a pack of 10 Wild Dogs, and so it goes on, endless hours of fun and drama out in the Bush. Eventually it was as though the sightings started to come to us, sitting watching a Hippo laze in a cool pool, and out of the bushes came two Leopard cubs to quench their thirst in the heat of the day, while there mother was away on the hunt. 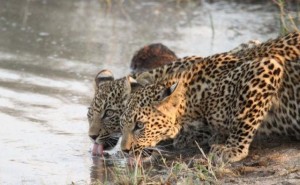 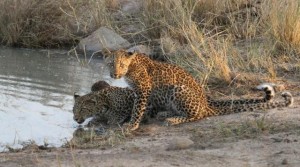 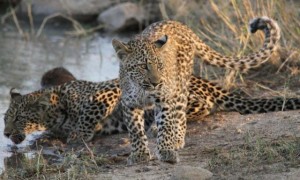 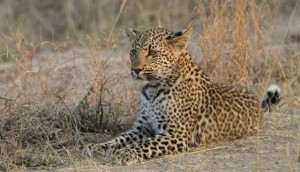 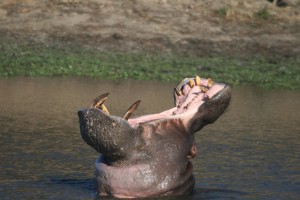 One evening drive, coming across the Ottawa Pride of Lions on a Buffalo Kill was quite an experience, especially as the Hyena’s started to gather and added to the atmosphere with their eerie calls echoing through the night.

On the one evening drive we were “bumbling” along the Kloof River at sunset when we came across the Tai Dam Female lying up on one of the cliff faces over hanging the river bed. It had been a hot day and she was relishing the cool breeze that had picked up in the latter part of the afternoon. We watched her for a while, a peaceful and tranquil setting. Suddenly the atmosphere changed, she sat up and arched her back, tail erect, staring and hissing in a direction away from the riverbed. She turned and ran down the river bank across the sand and into the thicket on the other side. Out of the bush where she was sitting a few moments ago, the Ottawa Pride appeared, two adult lionesses, two sub adult females, two cubs and two sub adult males, moving down the river bank, stopping to drink in the cool pool of water right next to our vehicle, special times indeed.

And so I could carry on, time and time again we were rewarded with the patients of sitting, watching and waiting, it paid off.

Thanks to Allen, Ruth, Beverly, Tim and Jan for the special moments shared, looking forward to doing it all again next year.

Thanks to Tim Warner and Heinrich for use of their pictures in this article and we look forward to adding some video footage from Allen Wolf in the very near future.

9 thoughts on “Another Amazing 10 day Safari”