A Strange Sighting on the Afternoon Drive

A Strange Sighting on the Afternoon Drive

As Gary left on the afternoon drive, a strange “apparition” appeared out of the bushes!!

Always good to have such good friends staying with us again.

This time Trevor and Theresa brought Alan and Abby with them, their first safari, and it was inevitable that the Gorilla Suit had to come out.

We started the plot by telling Alan and Abby that we had a rouge Gorilla hanging around the Camp and terrorizing everyone, indeed it had been seen near the Camp in the morning. We then strapped Evert into the Gorilla Suit and had him hide behind the rocks just outside of the Lodge, awaiting Gary to depart on drive. Obviously we had to brief Gary on the plans as we were worried he might shoot Evert as he came screaming out of the bush.

Gary stopped just outside the entrance to the Lodge and pointed to the right to get Alan and Abby’s attention, and at that precise moment, Evert could have won an Oscar for the way he jumped off the rocks and screaming at the top of his lungs, and charged the vehicle!!

Well if you could have heard the screams………………………..Abby got airborne and landed on Alan’s lap, preventing him jumping off the vehicle and disappearing into the bush.

Thanks for being such good sports, I know one of these days you will forgive us!!!! 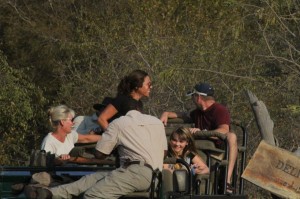 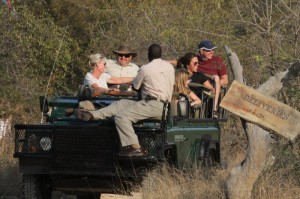 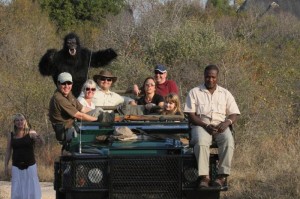 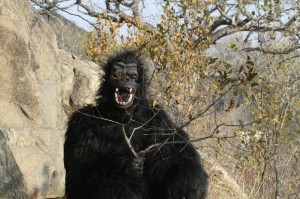 11 thoughts on “A Strange Sighting on the Afternoon Drive”