This morning we had a phenomanal sighting of two leopards

This morning my tracker Abraham stopped me to have a look at some very fresh leopard tracks. Abraham was about 10 meters from me when I turned around and spotted a male leopard lying in a Marula tree, in perfect golden sunlight. As soon as we approached the sighting Abraham softly said, look there is a female leopard under the tree as well. 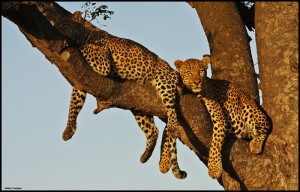 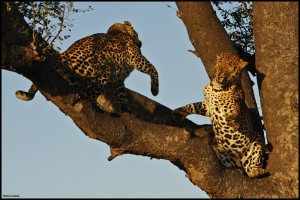 Minutes later she jumped into the tree and what happened was an absolute photographic bliss. Two leopards up in a tree in perfect golden light. The female is known as the Tai dam female and to everyone’s surprise was seen miles out of her territory. It is well documented that female leopards will move out of their territories in search of a male leopard to mate. When they find their chosen partner she will do everything she can do to get the male interested in her. She tried her best to get the males attention, and after some time he had enough and jumped down, with her following in hot pursuit. 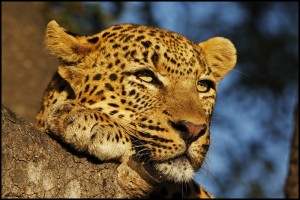 We are all hoping that they will start mating, as leopard mate for up to six days in a row (4 days is the norm) and some more incredible photographic opportunities might follow. 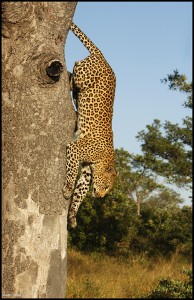 0 thoughts on “A Photographers Dream”