Tlangisa and Dayone visited by a passing Hyena

Tlangisa and Dayone visited by a passing Hyena

Great interaction between Leopard and Hyena

Great interaction between Leopards and Hyena, with the Hyena making sure his presence is known!

Slowly approaching with a lot of caution, this Hyena never gave up and kept coming closer until the Leopards moved a little further away – as they had no interest in his curiosity.

Moments later, while Tlangisa was presenting herself to DayOne, the Hyena approached again,this time with a lot more speed, sending Tlangisa leaping into a tree and DayOne up the bank of the riverbed.

With no interest in Tlangisa, DayOne went into a thicket just up the bank and Tlangisa followed in hot pursuit. This left the Hyena alone on the sand and he spent some time trying to pick up sent of any food that the leopards might have left behind – with no success. 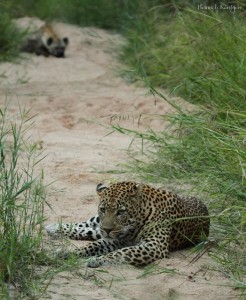 Great audio of DayOne growling at Tlangisa female with commentary from Eric – clearly supporting the Hyena in his second attempt.

3 thoughts on “Tlangisa and Dayone visited by a passing Hyena”