Another first for leopard Hills. We have finally seen Hlaba Nkunzi’s cubs on game drive after nearly 2 months of holding our breathe. 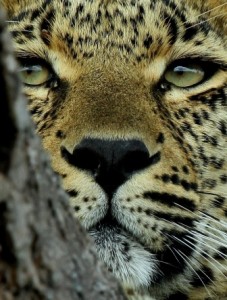 Since the first week in February, when Hlaba Nkunsi gave birth and hid her little cubs in Camp, she has been a regular sighting on game drive in and around the Leopard Hills vicinity. She had then moved her cubs up to the Ulalapa deck after about 3 weeks in camp, and as far as we know has kept them there ever since. Leopards will move their cubs periodically for safety, as they start to leave there sent at the den site. Lion and hyena, even some of the larger snakes will pick up on these smells and make it easier to find. As Leopards are in direct competition with Lions and Hyena they will not stop in taking the opportunity to lessen the population and visa versa.

So since her move to Ulalapa Camp we have been unsure exactly where she had left her cubs and when she was going to move them to the new den site! ! ! We hadn‘t seen much of her for a while and thought that she may have moved them again. The last 2 weeks have been a flourish of ranger activity trying to find Hlaba Nkunzi and then hopefully have her leading us to her new den site. 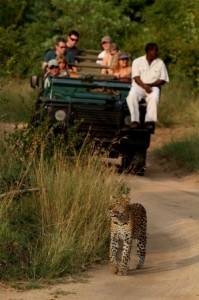 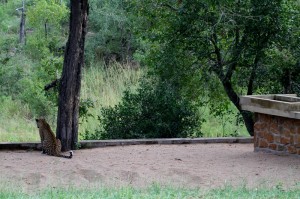 Well, last night while on game drive we had been hit by a relatively large storm and my guests were content to get back to camp a little earlier than usual. Because of this, we were back in camp at 18H45, when we rounded the last corner. 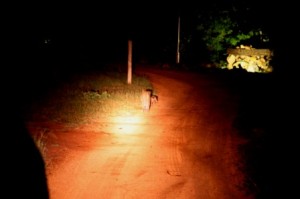 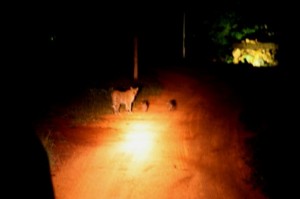 There she was ! ! ! With 2 little Hlaba Nkunzi look alikes in tow. (Please excuse the quality of the images) She moved up through the parking lot and passed the reception area and under the sala. The cubs where seen near the main pool area this morning while mom was away.

It looks like she’s back in camp for awhile and hopefully will give us the opportunity for new update over the next few weeks.