It wasn’t too long after the game drives left the lodge yesterday afternoon, that a radio call came, saying there is a female leopard and her two cubs on their way to the lodge.

The immediate thought was, Hlaba Nkunzi! She has been spending the majority of her time away from the lodge, out of our traversing area – so it is wonderful news that she has brought them back to Leopard Hills – for how long that could be, we’re unsure of.

After moving the cubs from the Mabrak riverbed, in the front of the lodge, she very comfortably moved towards the lodge and they spent quite a bit of time on the deck of Suite 4. The cubs were playing around in the outdoor shower next to the pool, enjoying their new surroundings.

During the night they were all lying down next to the pathway between Suite 1 and the Gym, could see it was definitely not Hlaba Nkunzi’s first time in Leopard Hills – knowing exactly where to go.

Below Images are of the Leopards on the deck of Suite 4. 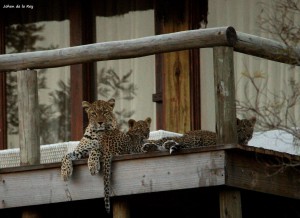 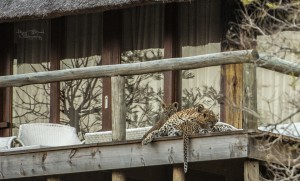