To Duncan and the entire Leopard Hills team.

Duncan, I was looking forward to meeting you while I visited, but alas you were on leave. If there is one thing that really stands out for me looking back on my visit, it’s the warm, friendly and efficient service from the entire Leopard Hills team. I can only assume that this is not a coincidence by means of selective employment alone, but also from a sense of pride and service excellence passed down from management, which has been embraced by the whole Leopard Hills team.

Please excuse me if I ramble on, but I simply cannot say enough about Leopard Hills. The words needed to sincerely express how honoured and privileged I feel to have been at Leopard Hills, simply elude me.

My trip started with a sighting of a Lioness with accompanying male, lying under a tree retreating from the sun. To get so close to these animals was very special indeed, and the way in which they lazed around, almost motionless through means of complete contentment, set the scene for the duration of my stay. 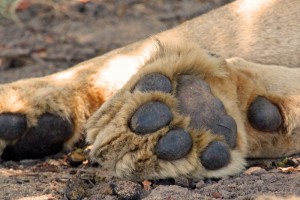 I have followed the blog for quite some time. When Makwela ruled the koppie (rocky outcrop) of Leopard Hills, I dearly wished to see her one day. Sadly that era has passed, but nonetheless, within a few minutes of seeing the Lions, Gary bumped into Hlaba Nkunzi. We followed her a few meters off the road, where she jumped into a tree in true Leopard fashion, then casually collapsed over a branch to peruse her territory. When she climbed down, Gary drove us ahead of her, in order to place the sun behind us and take pictures while she walked towards us. What happened next will stay with me forever. She walked casually towards us from around 50 meters away, and never slowed down until she was a mere few meters from us, where she glanced up briefly, before lowering her head and calmly proceeded to walk directly under the vehicle!! It was after that magical, and close encounter with her that I turned to Gary and said, “Heaven on Earth is not a statement, it is a place in Sabi Sands called Leopard Hills.”…. and that is what I will always know Leopard Hills as. It is truly Heaven on Earth. These pictures were taken during that experience. 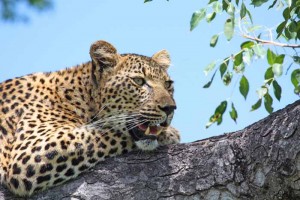 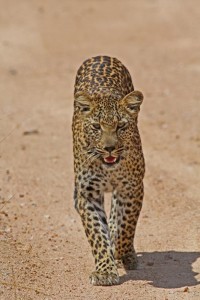 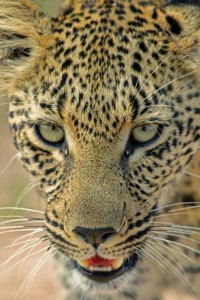 Wild Dog and Leopard are by far my favourite of the predators, but the sightings we had of Cheetah and “Super Cub” were magnificent. Then the really special sightings like Saddle Billed Storks, a LBR eating a grass hopper, a Golden Orb injecting a butterfly with venom, a very close encounter with Elephants and Rhino, and Hippo mating to name but a few. I could carry on for days writing, but let it be known that Leopard Hills will forever remain the location of my fondest wildlife memories, and having a mother working in African nature conservation for almost 20 years, I can assure you that I have spent my fair share of time in the bush. I have so many pictures from my time at Leopard Hills, and following are a few of them. 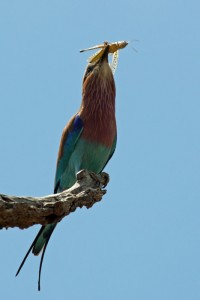 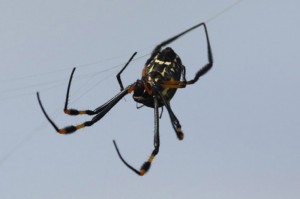 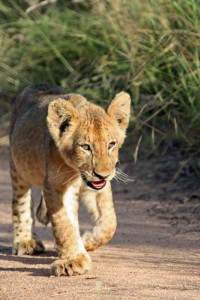 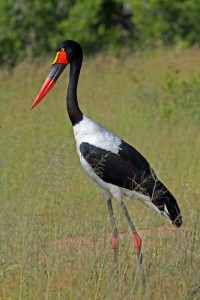 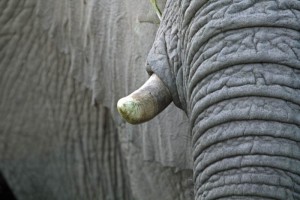 My last drive was with Marius and AB. We headed towards the lodge pan, and drove down into the river looking for Hlaba Nkunzi who had been spotted from the lodge deck earlier making an Impala kill, before dragging it into the river. Some excellent direction from AB, and some really great driving by Marius placed us on the lip of the river drop, and right next to Hlaba Nkunzi while she lay next to her kill, recovering from the experience. Knowing it was my last drive, and after having captured some decent images of her earlier thanks to Gary”s great instincts and predictions, I chose to take just one picture, place the camera down and simply indulge in the sighting, which encapsulates the circle of life in nature.

For those of you who are following the blog, and yet to visit Leopard Hills, I will inform you upfront that your expectations of wildlife viewing will almost certainly be exceeded. This photo, taken from Gary’s vehicle, clearly shows how close Marius and his guests are to the spectacular animals that roam freely in the reserve. 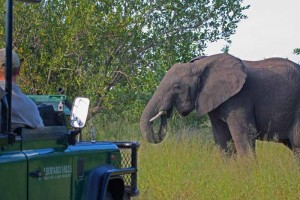 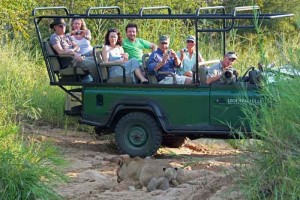 Leopard Hills is a magical experience and one that will stay with you forever. The knowledge, and constant information flow from both Gary and Marius on not only the large animals, but the small little bugs and critters, will enrich your experience of the African bush, and certainly expose the fact that all the animals and small wonders to view, do not aimlessly wander through the bush, but each have a unique and definite purpose, as well as means of survival. Knowing all these little intricacies make the experience even more powerful and endearing.

I will not mention any names in particular, for fear of forgetting a few, so to the entire compliment of Leopard Hills staff, “Inkomo shinene” (Thank you)

0 thoughts on “Heaven on Earth”