Great Sightings within the Last Week

Great Sightings within the Last Week

My guests and I had some great sightings in the last week.

The bush is lush and green, but that haven’t stopped our amazing game viewing that we have had in the last week.

On an afternoon safari we came across 4 elephant bulls swimming and playing at Tassel- Berry Dam in the Southern part of our traversing area. We watched for more than an hour as the 4 bulls played non-stop, while the rest of the herd was feeding nearby. As the bulls left the water, the oldest of the 4 ran straight towards us and gave us a warning also known as a ‘mock charge’. 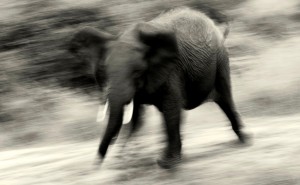 Three afternoons ago we traveled South when we cam across the pack of 4 wild dogs. The dogs headed straight towards Hlaba Nkunzi dam where we saw a massive herd of impala minutes earlier. We knew we were in for a treat, but as the dogs reached the dam they were greeted by 3 rhinos. The territorial bull made it his duty to chase away the intruders. Also at Hlaba Nkunzi dam was a Woodland Kingfisher perched on a dead Acacia branch, a great sighting for all the bird watchers in the group. 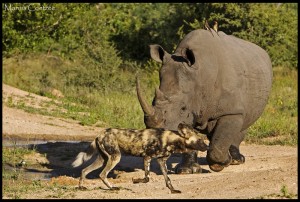 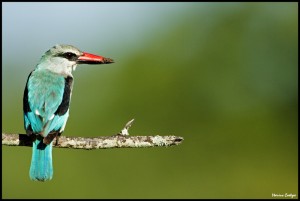 Yesterday we came across one of my favorite leopards, the Shikavi female, daughter of the Shangwa female. She is a beautiful animal and like her mother very big for a female. We watched her lying on the bank of the Sand River under a massive Jackal-Berry tree grooming herself. 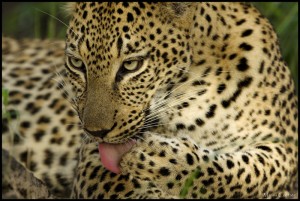 A special week of sightings indeed.

0 thoughts on “Great Sightings within the Last Week”