While on my way to link up two of our Guests with Gary, we ran into the “animal rush hour”

Due to a delayed flight in from Johannesburg, two of our Guests, Ian and Laura only arrived at Camp half an hour after the evening Game Drive had departed. Not to be deterred, I arranged to meet them once they had settled in and freshened up, and link them up to Gary out in the bush.

Gary radioed us to say he was sitting at Wallingford Dam watching two Hippo, and there was a herd of about 70 Buffalo on their way down to drink, sounded like a good place to meet up and hand over Ian and Laura to his care.

We set off, and within ten minutes came across a herd of twenty Elephants on the road, mainly females, but some very small calves in tow. What a sight as they ambled past the vehicle within a couple of metres, paying us no attention whatsoever apart from the occasional youngster putting its trunk out to give us an inquisitive smell.

Gary radioed again: “where are you, the Buffalo have reached the waterhole and there is a 4 metre Crocodile showing some interest in them?”

As soon as the Elephants would allow, we were on our way again, not too far away from our meeting point. As we approached the waterhole we could see the Buffalo milling about, in and around the water, and the Hippo’s venting their annoyance at them for disturbing their peaceful afternoon siesta.

Unbelievably, before we could even reach Gary, a female Leopard walked out onto the road in front of us, she had walked right past the Buffalo, through Gary’s sighting and carried on down the road, right past our vehicle. This was getting ridiculous, and very difficult to explain to Ian and Laura who had literally been at Leopard Hills for less than an hour and had already encountered 20 Elephant, 2 Hippo. 1 huge Crocodile, 70 Buffalo and a female Leopard!!

I did eventually manage to get Ian and Laura to Gary, just in time for the evening sundowner break, what an evening it had been. 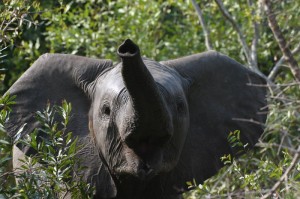 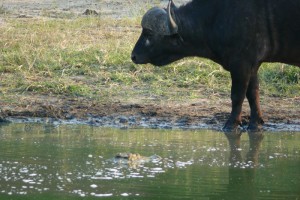 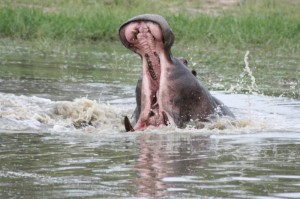 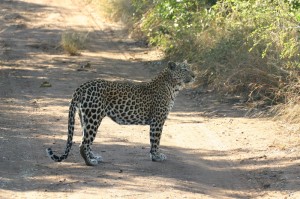 0 thoughts on “An eventful afternoon”