As guides we are very fortunate to call the African bushveld home. We spend many hours every single day as witnesses to mother nature’s astonishing beauty. As much as our days have some form of routine we always expect the unexpected, and no two days are ever the same. On the 26th of May, this point was proven yet again. We had just left a sighting of two lionesses and their three cubs, we were on our way home when a surprising call came through the radio. A word I had yet to learn and had to refer to our tracker Sipho and ask what this animal was. “Ndloti?” he asked in disbelieve. After a few seconds Sipho turned around with a great big smile and said “That’s a Serval!”.

Riddled with excitement, we dropped a gear and started making our way into the area where this small cat was called in. Keeping in mind that usually Serval sightings are so quick that the opportunity for a photo slips through your fingers before you have even reached for your camera.

Well we were absolutely flabbergasted when we arrived to see that this Serval was laying down 10m from the side of the road watching us with utter content. We managed to spend about 40 minutes with her as she moved through the brush and eventually disappeared into a thicket. 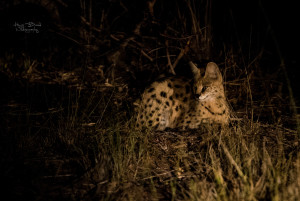 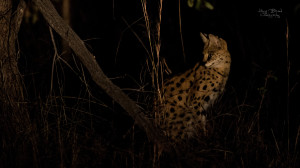 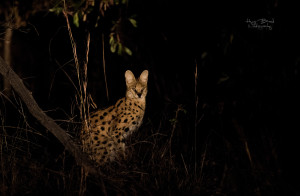 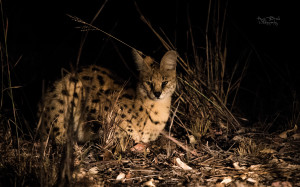 The next evening we managed to find her again, not too far from where we found her the previous evening. We were observing her moving through an open area where the grass was nice and short. Her ears flickered, and her behaviour changed instantaneously. She dropped her body, raised her shoulder blades, and began a very brisk stalk. Within a couple of seconds we managed to witness her kill and consume a field mouse. 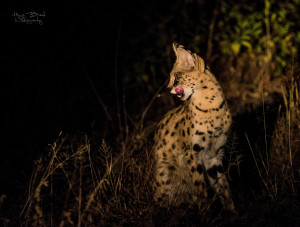 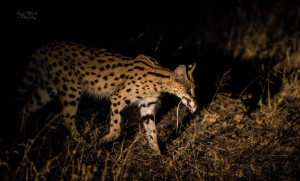 We will certainly be on the lookout for her again in the hopes that she becomes more commonly seen, and awes our rangers and guests alike with her enchanting beauty.