Saving the Rhino One Step at a Time

Saving the Rhino One Step at a Time

It has been a busy week so far here in the Bush, with an outstanding initiative between the Lodges, The Sabi Sand Reserve and The Rhino Rescue Project.
As part of our ongoing effort to combat rhino poaching on the Sabi Sand, we are undertaking the horn infusion treatment as pioneered by the Rhino Rescue Project. We view poisoning rhino horn as a valuable intervention to deflect prospective poachers. 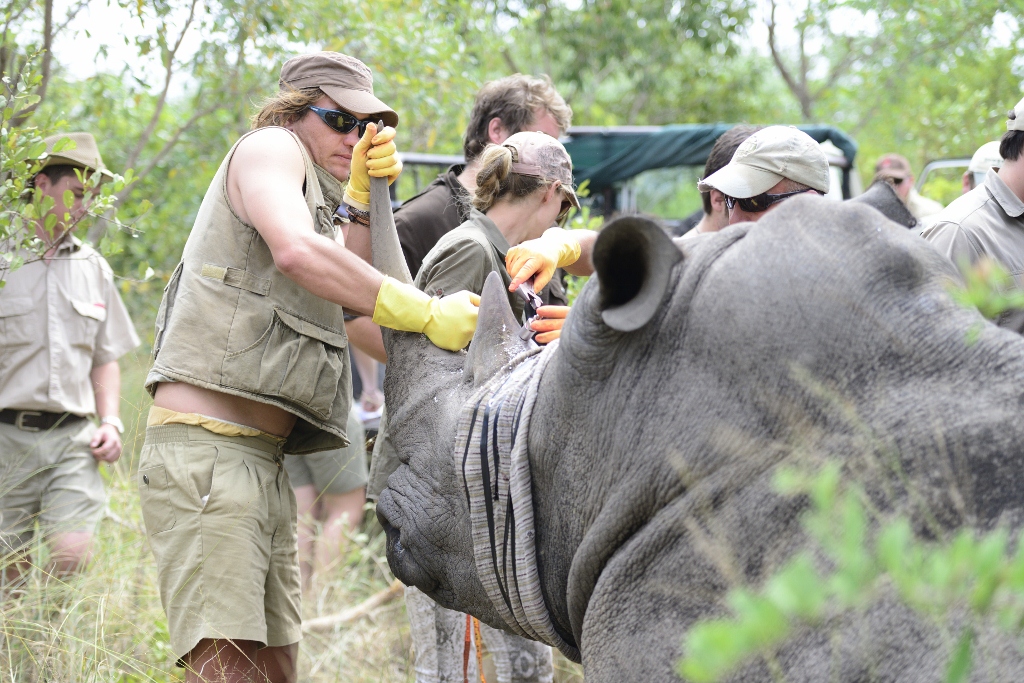 What does the treatment entail?
The horn is treated by infusing it with an indelible dye that contaminates the horn and renders it useless for ornamental – or medicinal use. A full DNA sample is harvested and three matching identification microchips are inserted into the horns and the animal itself. At the owners discretion, the indelible dye can be mixed with with special compound of depot ectoparasiticides (specifically acaricides containing pyrethroids and organophosphates) and a tracking device can also be fitted.

What steps have been taken to prevent treated horns being accidently ingested?
The fact that the rhino’s in the reserve are treated is widely publicised by means of 200+ signposts around the reserve’s perimeter and, should a treated rhino be killed, the indelible dye is clearly visible inside the horn – a clear indication that the horn had been tampered with. We strongly suggest involving staff in the horn treatment process to assist (with menial tasks) as their involvement ensures that word about the treatment spreads rapidly via the “bush telegraph”. 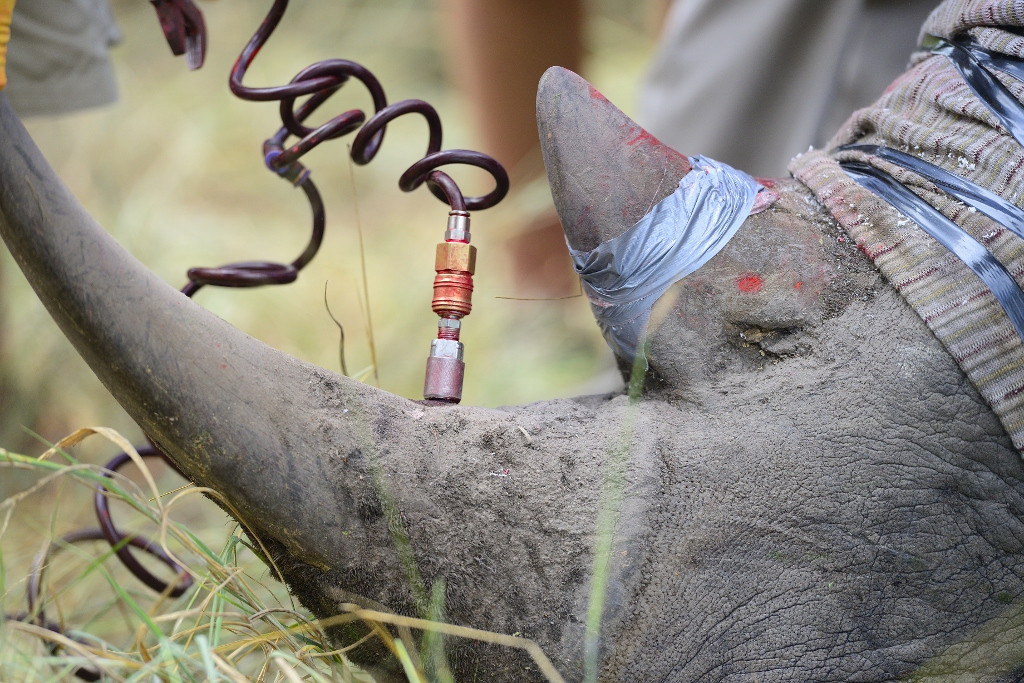 What is the purpose of the dye and how does it work?
The dye is bright pink and clearly seen inside a treated horn, regardless of whether the ectoparasiticides have been used, which means that there can be no doubt about whether a horn is treated or not. It is similar to products used in the banking industry and has the added benefit that it is visible on an x-ray scanner. Thus a treated horn, even when ground to a fine powder, cannot be passed through security checkpoints unnoticed and so airport security checkpoints are almost certain to pick up the presence of the dye. The dye cannot be removed in any way and therefore the horn is rendered useless in terms of ornamental use. This contamination should also discourage medicinal use. Furthermore, sniffer dogs have been trained at a professional training facility to track rhino horns containing the dye, even in minuscule quantities. 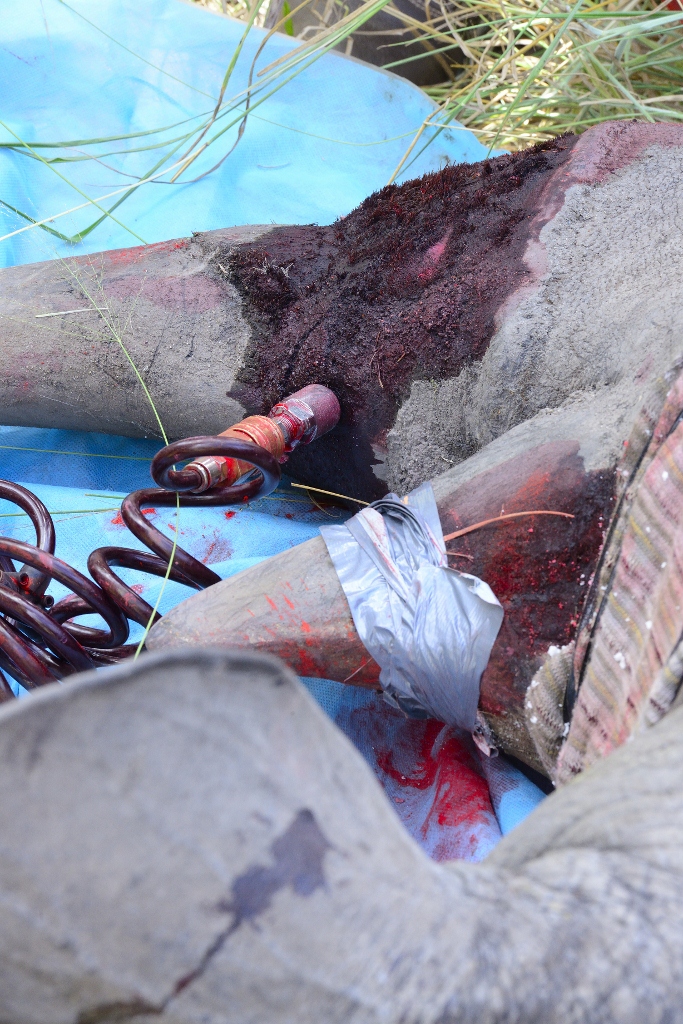 What is the reason for treating the horn?
Aside from the health benefits to the rhinos, it is the hope of the Rhino Rescue Project that the treatment of the horn will deter the poacher and prevent the rhino being killed in the first place. We are hoping that no treated horn enters the market, as that will mean that programme is successful and the rhino horns are being left intact on the rhino.

Is the treatment effective?
All animals in the initial treatment sample are in excellent health. Since treatment was administered approximately 18 months ago, two cows have given birth to healthy calfs, both of whom are lactating normally. Another cow has fallen pregnant during this time. Moreover, not a single treated animal has been poached since administration of the treatment. The treatment could thus be said to have brought about a 100% decrease in poaching. A year after administration of the treatment, a number of the animlas horns were re-tested to establish distribution of the treatment inside the horn over time and to ensure that the treatment did not find its way into the animal’s system and affect its overall health. Ideally, from a research perspective, a four year growth cycle should elapse before we can say with certainty that the treatment is 100% effective. However, with the current poaching numbers skyrocketing by the day, our fear is that in four years time, this information will be useless, and there won’t be rhinos left to treat.

What are the overall benefits of including the ectoparasiticides in to the treatment?
The inclusion of ectoparasiticides in to the treatment assists towards improved health of the animals. Wild animals are not normally be treated against parasites – we believe strongly in nature being allowed to run its course and human intervention being kept to a minimum – however, the inclusion in to the treatment potentially neutralises a dual threat (both poaching and parasites). This treatment benefits the rhino owner, does not harm the environment, does not harm other living organisms, has no adverse effects on tourism or the economy, is cost-effective, legal and can be completed in under an hour. In other words, it is a minimally-invasive procedure intended to uphold the status quo with regard to the trade in animal parts.

6 thoughts on “Saving the Rhino One Step at a Time”