As the weather warms up so does the game viewing…..

Oh, Duncan has been out in the bush with his regulars The Wolf family on a 10 day safari. Welcome back guys a great time was had as usual, have a look at Duncan’s blog article describing a truly action packed 10 days!

Leopards:
Hlaba Nkunzi:
We have been having some great sightings of her and the cubs in the lodge, especially at room 5,6,&7. Room 5 is a favourite stop for a drink while passing through, they seem to be quite at home here in the lodge. The cubs are now 8 months old and are getting a personality of their own. On the way back from leave Heinrich found her and her cubs at the Leopard Hills deliveries sign. What a welcome back from leave!!!!!!!!! 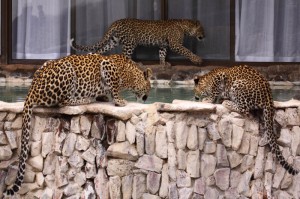 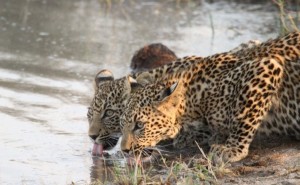 Tegwaan:
He has been wondering down south, we are thinking that there is a female on heat down there. This is one of the first few times that he has been seen so far down south, it is amazing what happens to a male when there is a female on heat!!!!!!!! He is also under quite alot of pressure from confident young and upcoming male leopards moving into his territory, Xinzele in the north and Kashane male in the south.

Mambirri:
Mambirri and her cub seem to be parting ways. The cub is at the age that she needs to go off and start doing things for herself. With the death of Makubela in the east there is an open territory over there and we are hoping that she will take up residence there.

Metsi:
Metsi and her 2 new 2 month old cubs have been spotted from time to time to the west of Leopard Hills. This is her first litter of cubs and we are hoping that she is a good enough mother to keep them both. Well, she has some of Makwela’s genes in her so she will be a great mother.

Lions:
Ximungwe pride:
These lionesses have had a tough time of late with the mapogo male lion returning from the east and hunting down all the cubs that are not his own. One lioness in particular refused to give up on her last remaining cub, moving all over her territory to avoid the rampant male. One morning in particular we followed her for 2 hours walking directly north away from the male with the poor little youngster battling to keep up. The sad news is that the cub hasn‘t been seen for 2 weeks and is presumed dead, 3 of the lionesses are now in oestrus and mating and 1 lioness is looking very pregnant and should be denning soon. Good luck to next generation of Ximungwe cubs! 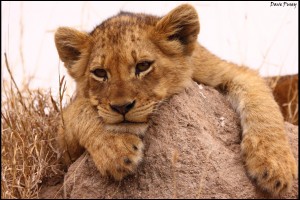 Mapogo coalition:
The coalition has been in our traversing area for most of the month. With the Ximungwe females in oestrus and the male coming back from the east, a dominance struggle amongst the males has ensued. There has been plenty of fighting and a few more battle scars added to each of them, mostly over the ladies!

Ottawa pride:
There has been another loss to the ottawa pride this month. While bringing down a huge buffalo bull one of the adult females was gored by the bull. On closer inspection she had been opened up by the buffalo from chin to tail and consiquently died 2hrs later. This means the make up of the pride is , 1 adult female, 3 2 yr old females, 2 2yr old males and 2 cubs of 9mnts old.

Buffalo:
There is a large group of around 25 daggaboys that have been seen close to camp recently. Heinrich and his guests had a memorable and humorous sighting of these bulls up on the Sand River one evening as they were crossing. One bull underestimated the depth of the water and completely submerged himself only to jump up all embarrassed as the other bulls ran through to the other side. (See blog posting)

White Rhino:
There have been many quality Rhino sightings this month, mostly around water holes as these animals have to come from further afield to access this precious resource. One highlight was the interaction involving 5 White Rhino observed and captured on video by Dave’s guests Paul and Julie (see blog posting).

Elephant:
As it heats up before the first rains the Sand River has become a magnet for herds of elephant, especially in the afternoons. After a scorching day to witness the excitement with which these pachyderms drink, splash and wallow together is always special.

Wild Dogs
Great news that the pack has been back in our traversing area on and off for over 2 weeks now, they have visited areas they haven‘t been to for years. Wonderful to see that 4 pups are still surviving and getting plenty of food over here, hopefully the abundant prey entices the pack to remain here for a while. Raymond and his guests were lucky enough to witness them kill a huge impala ram one morning.

Interesting info:
Ostrich:
On one morning drive, somewhere in the north of our traversing area Ronald and Gary spotted some very odd tracks. It worked out that the tracks were of an ostrich (which according to the old hands in the west) ,there hadn’t in 10 years been a confirmed sighting in the west.

After calling the tracks in there was rangers coming from all over the the west to come and track this animal, only to find it had moved off east.