The winds of change are fanning us towards winter as we celebrate our action packed 14th birthday month with some scintillating sightings.

As the wood sandpipers (pictured below) and many other migrants fatten up for the long journey north we reflect on a period of transition that handed us some agonising reminders of the harshness of Africa. 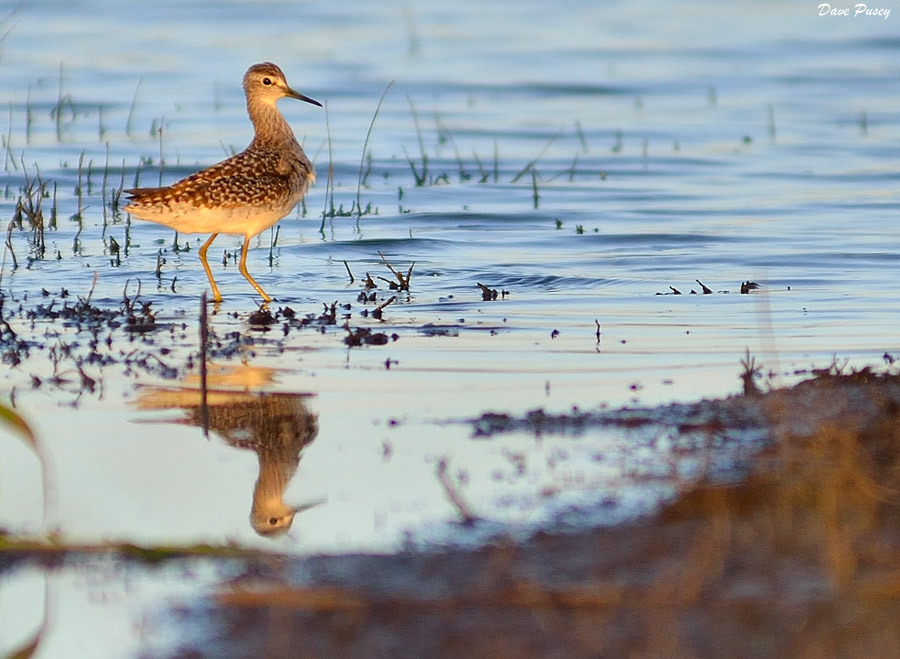 Leopards
Hlaba Nkunzi
The last year has been a really trying period for her, 2 litters of cubs sadly lost mostly due to instability among the male leopards in the area. Her previous cub may have been killed by a scavenging hyaena, the Ravenscourt female leopard, another male leopard or even lions…we will never know.

In this image taken a few days ago one can sense the fatigue in her expression. This was taken after we presume she had a territorial encounter with the Ravenscourt female who is territorial east of her, see the injury on her right ear. 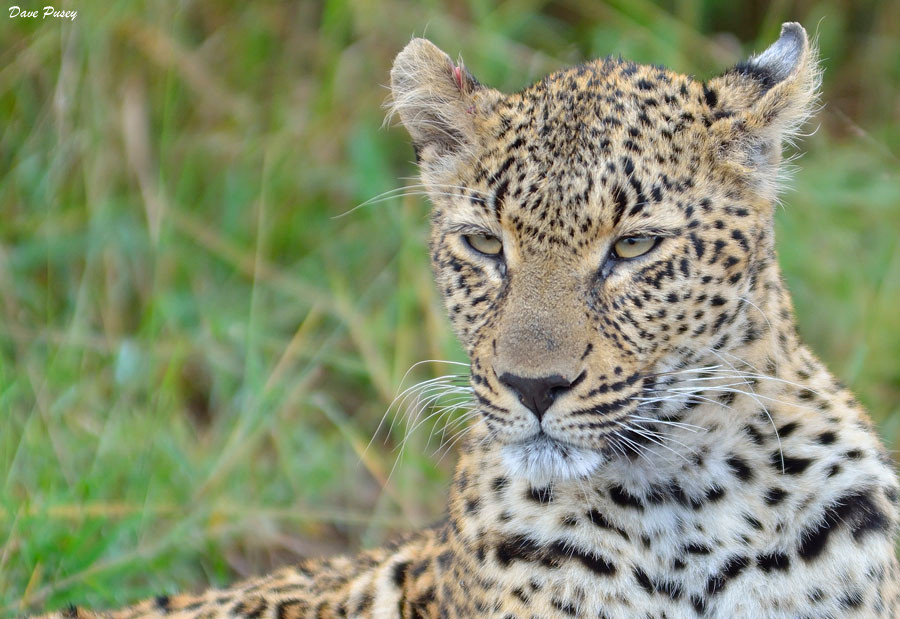 We hypothesise that Hlaba Nkunzi is pushing further east due to the commanding presence and protection provided by the Kashane male over there.

She still needs to look after her western territory near Leopard Hills and has been following the Dayone male around for the latter part of the month, presenting herself to him seemingly to no avail! See below image of his disinterested body language. Let’s hope he has already given in to her charms or does so soon! See video highlights. 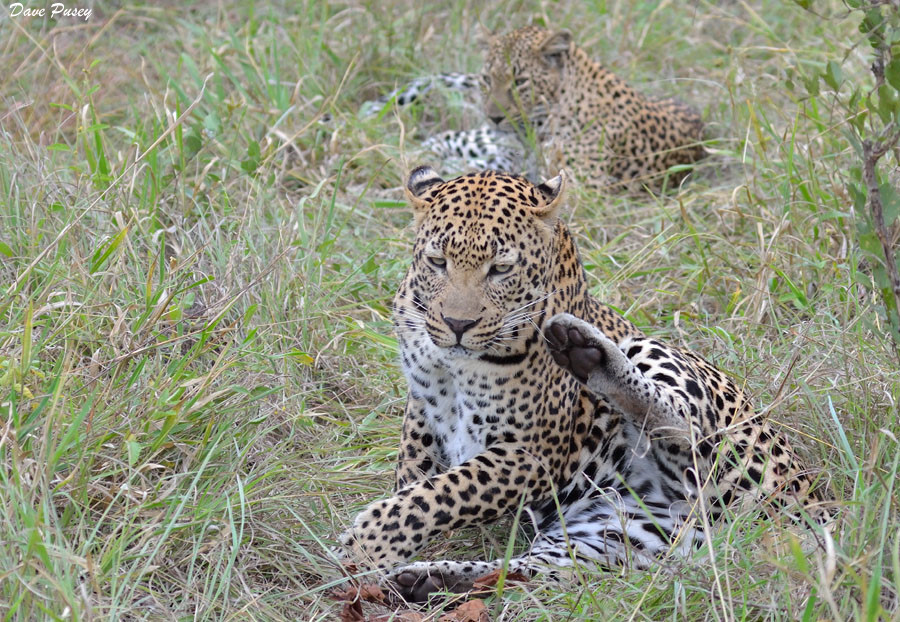 Thlangisa
As usual she has provided us with many wonderful sightings during the month, high up trees, atop termite mounds…next to waterholes! The list goes on! She is scent marking more regularly and has claimed the small but vacant territory north west of Leopard Hills. 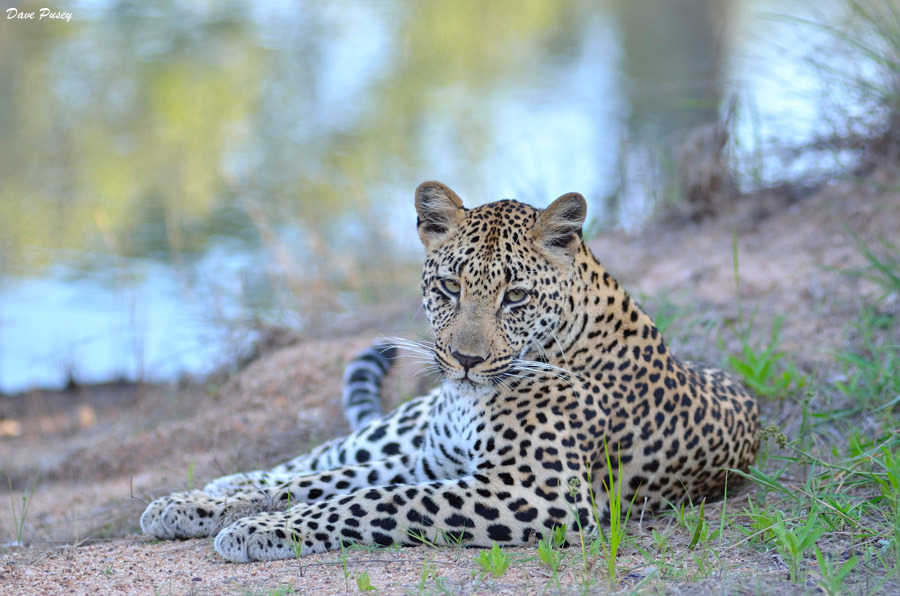 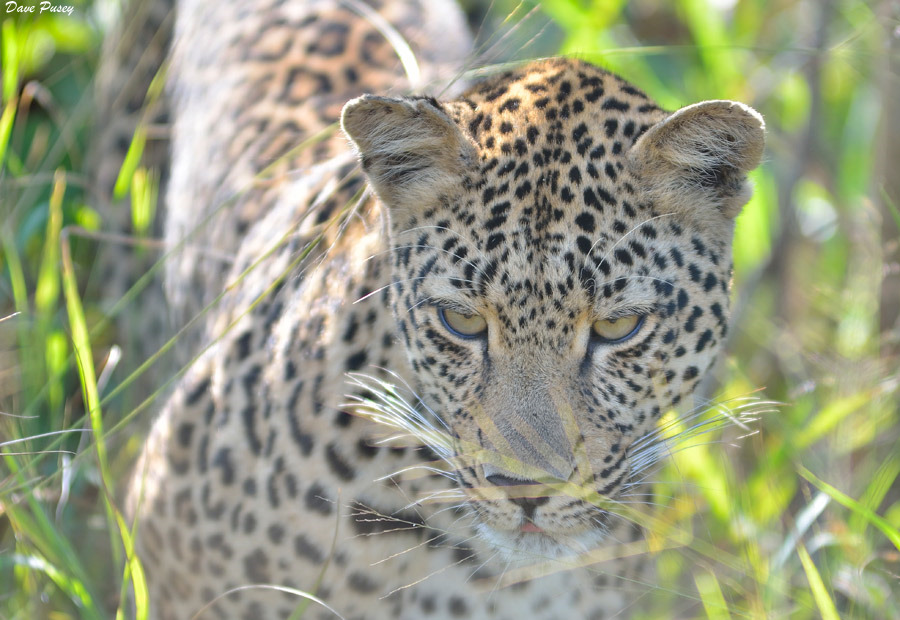 With Hlaba Nkunzi spending more time east and not marking here as frequently, Metsi has seized the opportunity of pushing in from the west! She has been seen numerous times very close to the lodge, possibly searching for den sites as she was mating with the Dayone male early in the month and could be pregnant.

There may some disputing over this prime location between these 2 experienced females sometime soon.

Here she is mating with Dayone. 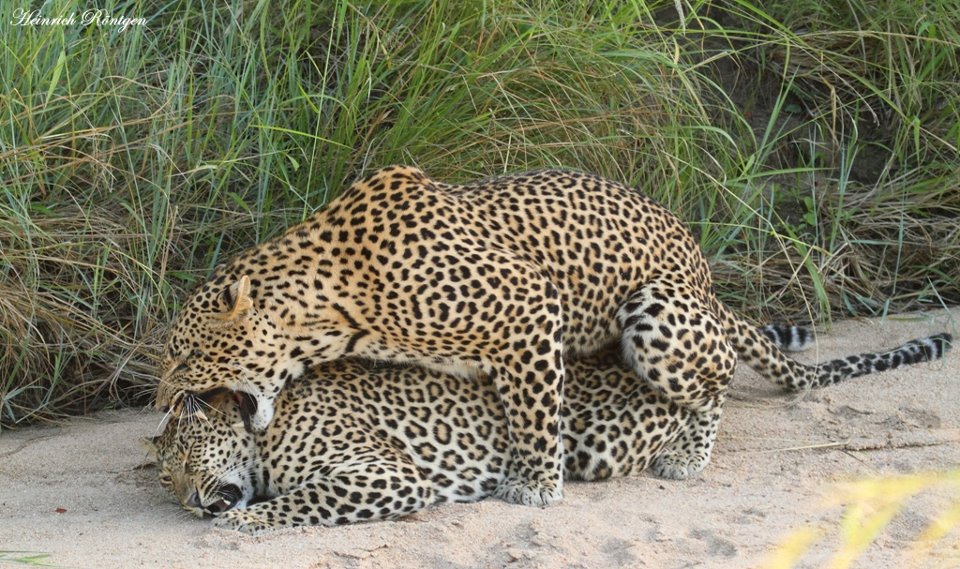 Xikavi
This stunning yet elusive female creates much excitement when she is located in her riverine habitat, here is a rare sighting of her rolling over out in the open. 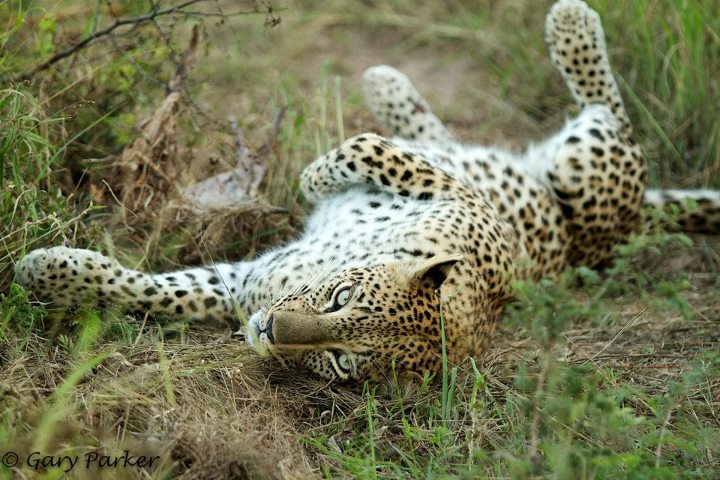 Shangwa
She has been located a couple of times in the far north east, still with her sub adult male cub on most occasions.

Kashane
Towards month end he has patrolled frequently on the western side of his expansive territory. This is most likely due to both the Hlaba Nkunzi and Ravenscourt females coming into oestrus. See video for interesting behavioural footage of him performing the Flehmen Grimace and then calling and scent marking to attract one of these females. 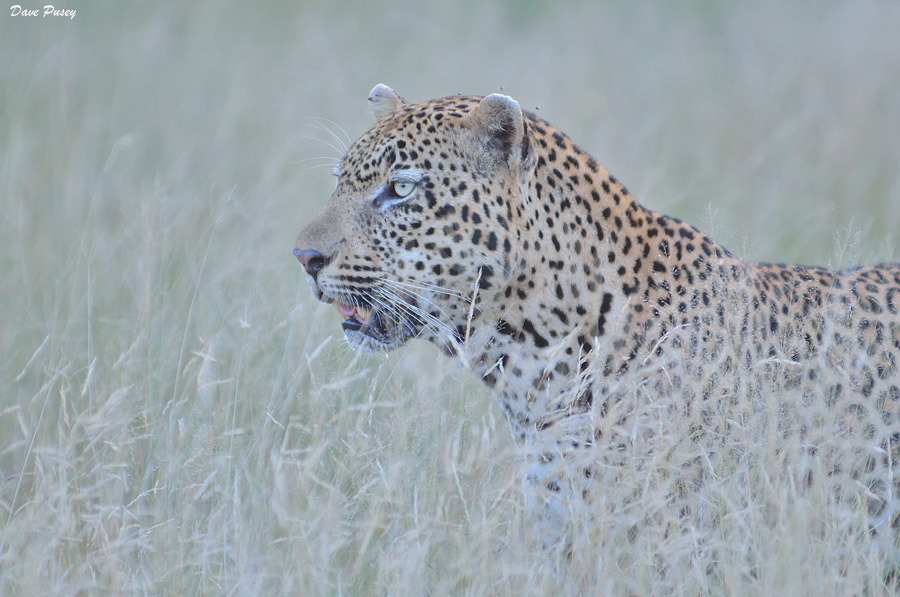 Dayone
He has taken over Xhinzele’s previous territory which has proved to be tiresome work for a young male… at least 4 females have flung themselves at him this month (Metsi, Hlaba Nkunzi, Dam 3 and even the youthful Thlangisa is trying her luck) See video of this fascinating behaviour.

Now much bigger, stronger and more self assured let’s hope that he remains territorial here for some time to come! Whether he is confident enough to hold his own against rival males remains to be seen. 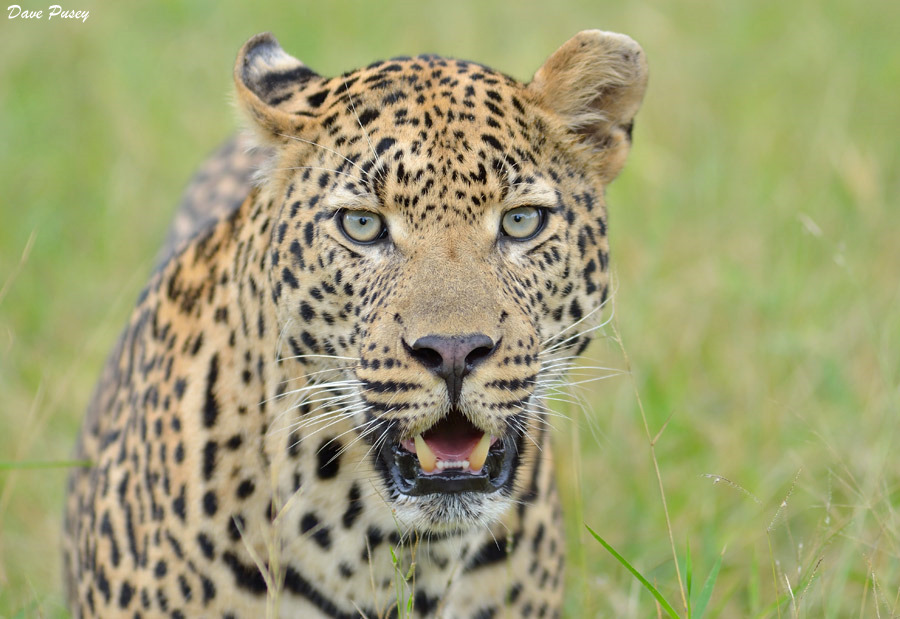 Still no sign of Xhinzele or Mashiabanje in the north, there are however tracks of a big male up there, could be one of them…

Lions (Lion dynamics and behaviour and then some!)

End of an Era! Last stand of the Mapogo Coaliton!

The defining moment had to come, speculation as to how and when has dominated conversation around dinner tables and campfires in recent weeks.

Every epic tale must build up and deliver a scintillating finale and the story of arguably the most acclaimed and notorious coalition of male lions ever documented to prowl Africa certainly did!

Here is a captivating image taken by Hannes in 2007 of 5 of the Mapogo during their heyday. 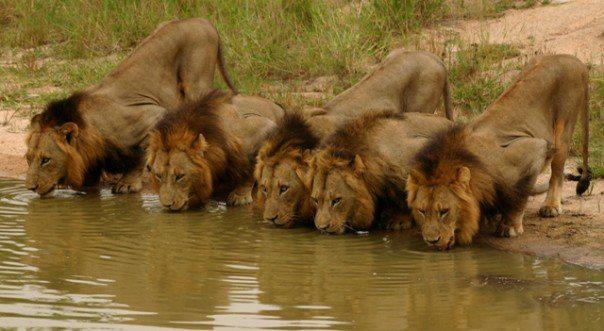 The 4 challengers a few days before the confrontation! 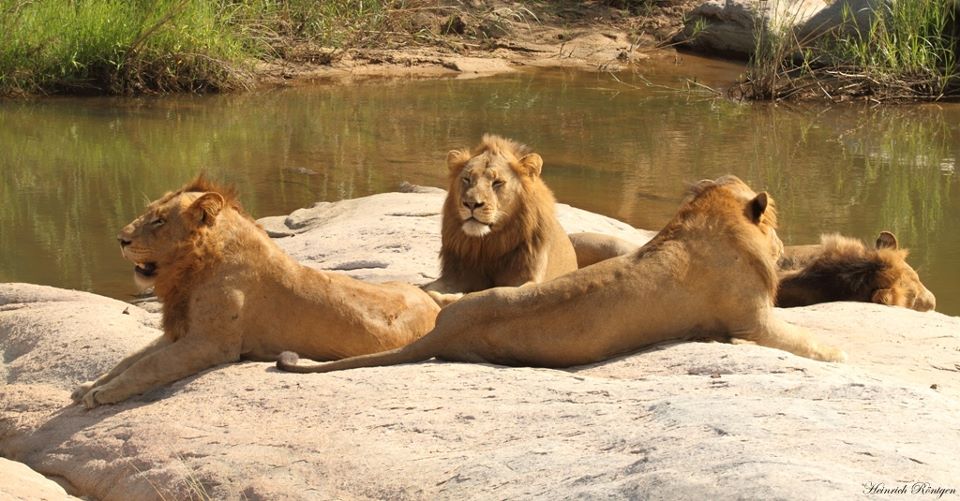 After their brief encounter with the 4 Selati (Southern) males a few weeks ago when the weakest Mapogo member was slightly injured, the dynamic changed and a follow up encounter involving the coalitions was imminent.

Was it the Ximhungwe lioness mating with the Selati males a month ago and giving them a taste of the trophy at stake? Was it a sudden a weakness detected in the weaker Mapogo male? What is certain is that a number of factors led to the showdown and heart wrenching culmination on the morning of March 16th!

Our guests have been privileged enough to witness both sides of the story evolve over the past week.

Firstly the youngsters moving in, strengthening their coalition bond, scent marking all over the Mapogo’s northern territory. It was almost as if they were preparing themselves for the inevitable confrontation.

See video below of the young males in the days building up to the 16th!

Meanwhile the 3 Mapogo were occupied and content with a large buffalo kill in the south that kept them busy for days.

On the morning of the 16th when we received the radio message “we have audio of lions fighting in the south”, we knew it was on! The initial message was relayed as 3 Mapogo’s have isolated a young male, this is what we expected…what we wished to be for the proud old men we had known and revered for so long!

On arrival on the scene to see the tables turned was unforeseen, shocking…it took us all some time to grasp what was unfolding in front of us. We expected all 3 Mapogo’s to stand their ground and rise to the challenge!

The old boxing adage “You’re only as good as your last fight” certainly holds true! It was the veteran gladiator that stood up to be counted and fought admirably for his territory, his offspring, his lionesses and ultimately his livelihood as a male lion! 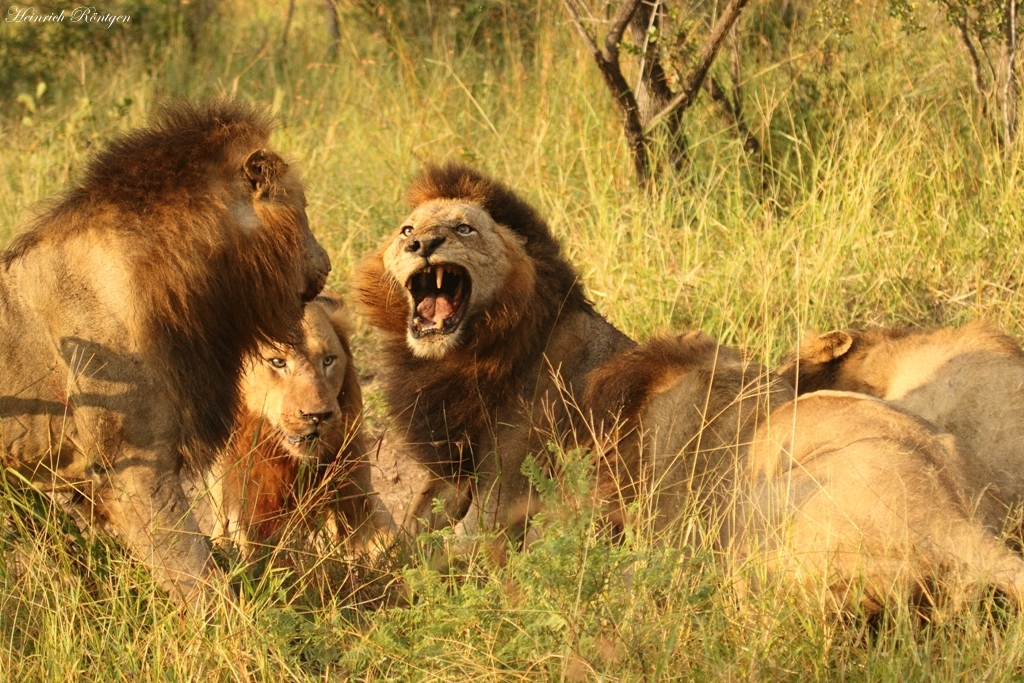 Video of the defining moment.

Without a territory is he not a male lion? He would rather die defending his pride than live out his existence as a castigated nomad, whatever your thoughts are on the short maned Mapogo and there are many contrasting opinions! He will always be respected and remembered for his character and fearlessness. 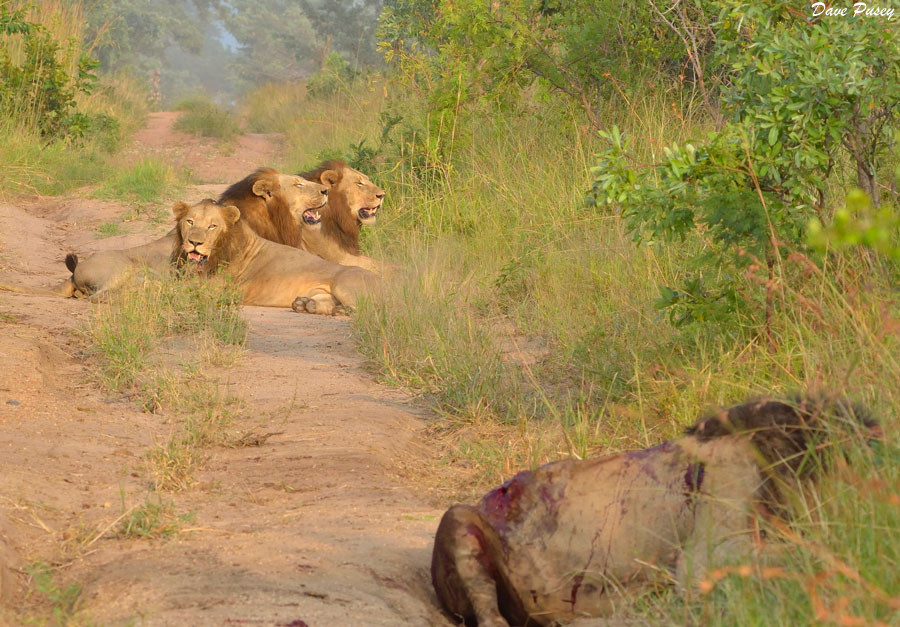 An afternoon thunderstorm rose eerily and saturated the bloodstained earth, washing away the Mapogo bloodline and unveiling an exciting new era.

The fate of the remaining Mapogo cubs hangs precariously in the balance, they will most likely be killed! We are however excited about new beginnings and some stability for the Ximhungwe pride under the Selati males.

The 2 remaining Mapogo have been seen infrequently since the takeover and are keeping a very low profile. Their existence will now be a struggle for survival with limited hunting ability and strong young coalitions looking to eliminate them from all sides.

Below images are of content looking Mapogo on their buffalo kill a mere 2 days before it all ended. 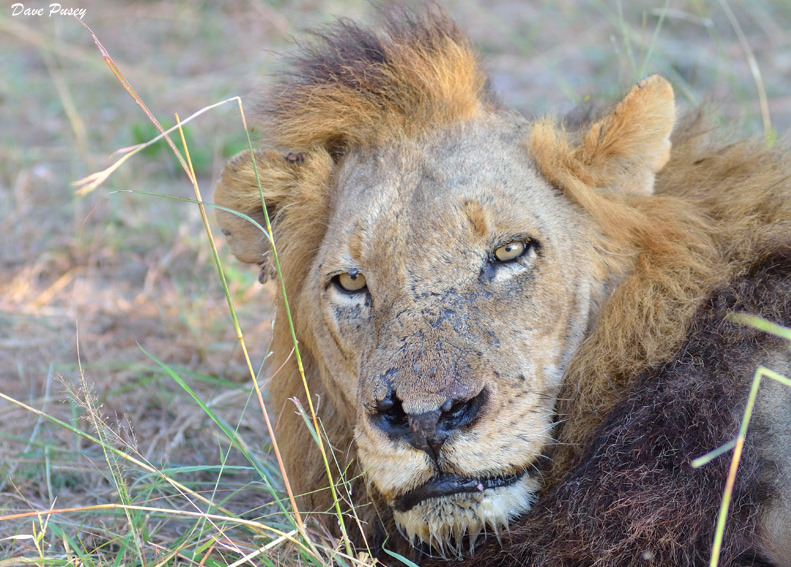 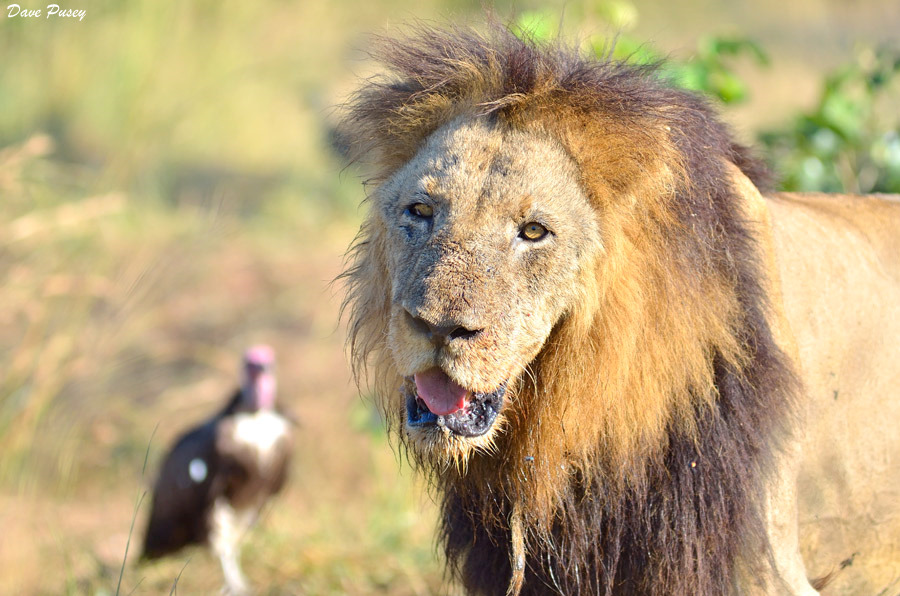 Ximhungwe pride rally together
The 4 Selati males had been on the scent of the Ximhungwe pride for over a week! What they didn’t bargain on was the maternal instinct and teamwork of 4 united lionesses that are prepared to put it all on the line to protect their cubs.

10 days ago both the males and lionesses were within 2 kilometers of each other far up in the north. During the night the lionesses must have picked up the males in hot pursuit and high tailed it south for over 10 kilometers.

In the morning the lionesses were located right on the southern fence line with their 4 exhausted cubs trotting heavy legged behind them. One of the males hadn‘t given up while his weary brothers couldn‘t take the pace. He was very close, within 500m of them and it was remarkable to observe his acute sense of smell as he trailed them until he finally caught sight of them.

The lionesses were left with no choice and rallied together.

Enjoy the images and video below. 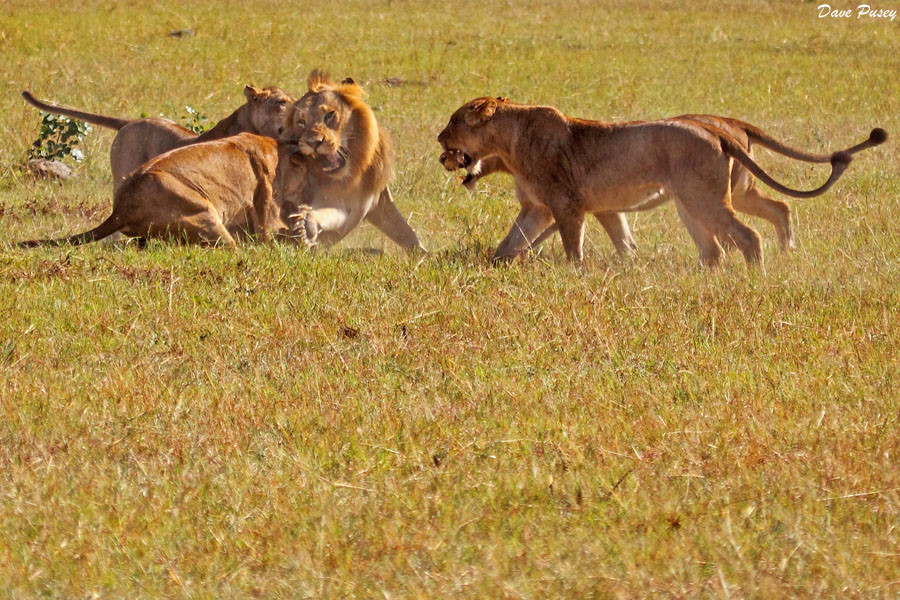 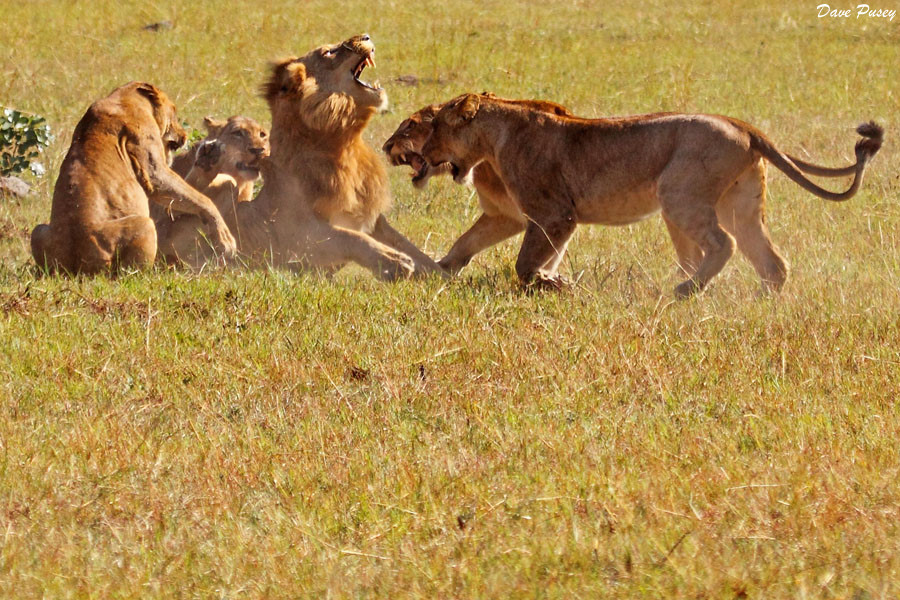 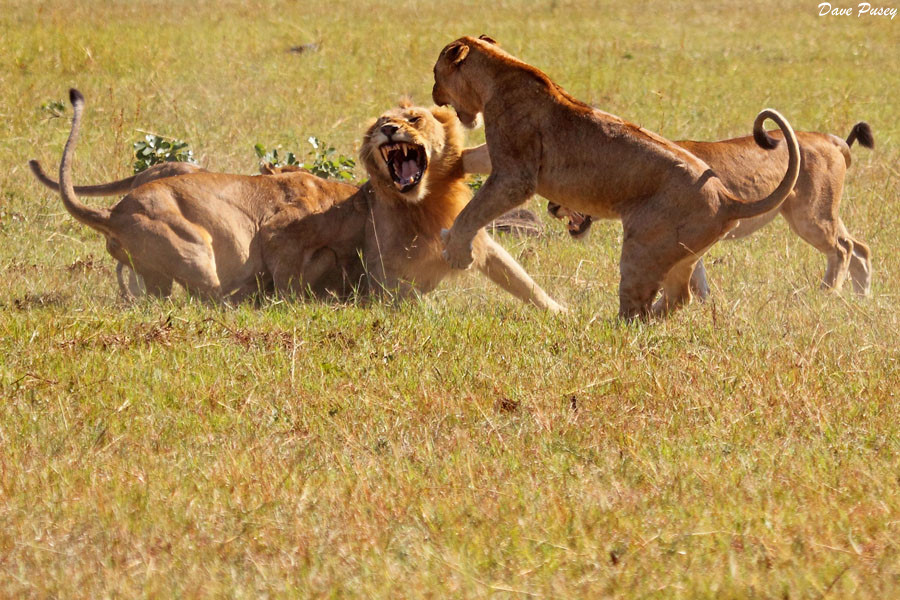 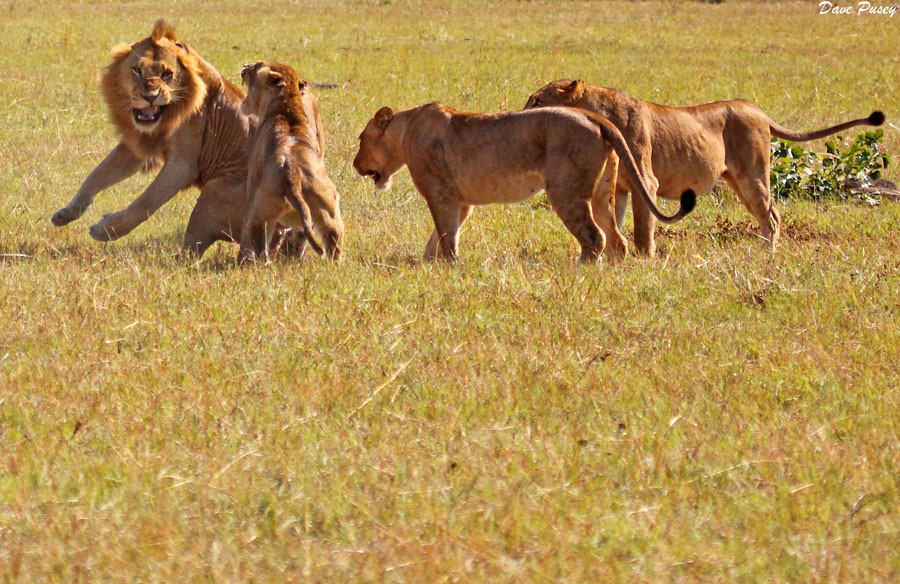 Pride takeovers are a lengthy sequence of events and the lionesses have won the first battle but we feel a confrontation with all 4 males is inevitable. We will keep you all posted! 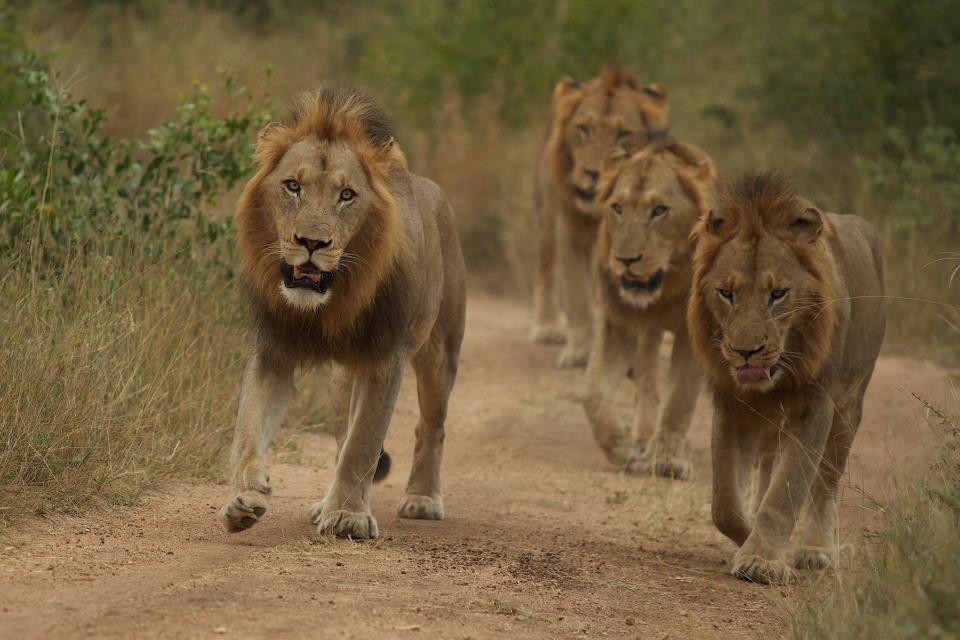 Strong, imposing, growing in stature and confidence by the day, these 4 handsome males are really looking the part as dominant, territorial male lions.

We are busy trying to establish if there is clear a dominance hierarchy amongst the 4! It seems the bolder male with the short lighter coloured mane who confronted the lionesses on his own takes the lead much of the time. He did so in the fight with the Mapogo and then again with lionesses, one of the males is also older by a few months and is sporting a darker more developed mane. Their ages are roughly between 4 and 4 and a half years old. 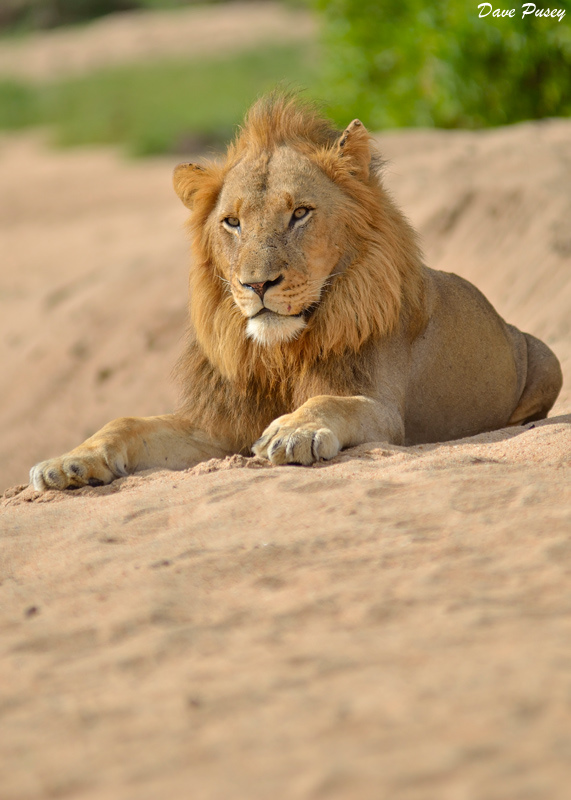 Specialist buffalo hunters
Schooled in the south east, roughly 40 kilometres away from here, amongst the herds of buffalo along the Sabie river, these males are experts at confronting the most formidable prey species Africa has to offer, head on! 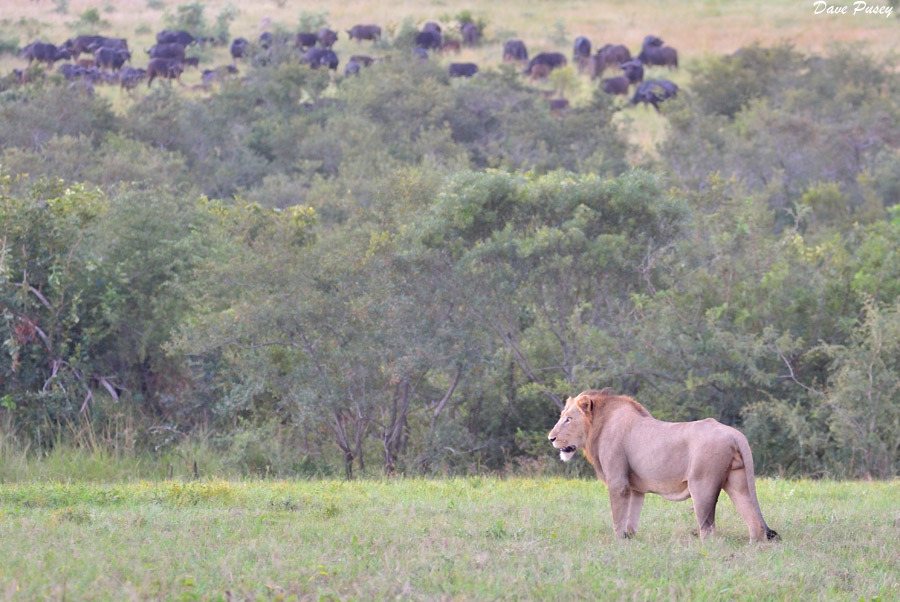 We were privileged to witness the below sequence along the Sand river a few days ago, most likely their first buffalo kill here in the west. 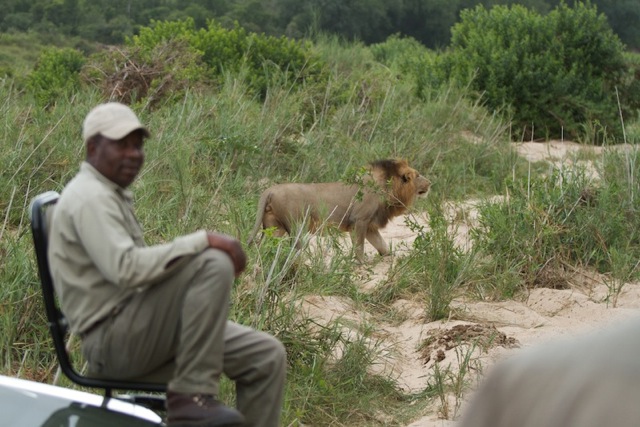 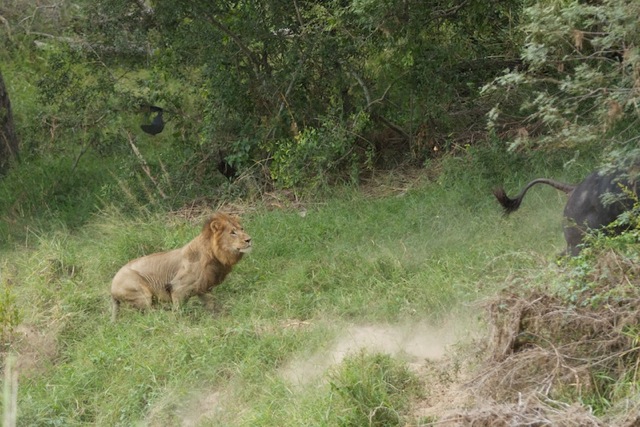 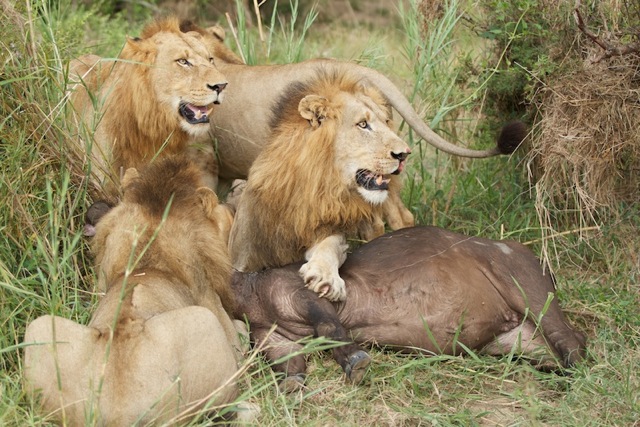 Othawa Pride
One of the 2 lionesses unveiled her litter of 8 week old cubs to us during the beginning of the month, 4 of them in total. (See pictures below and video) 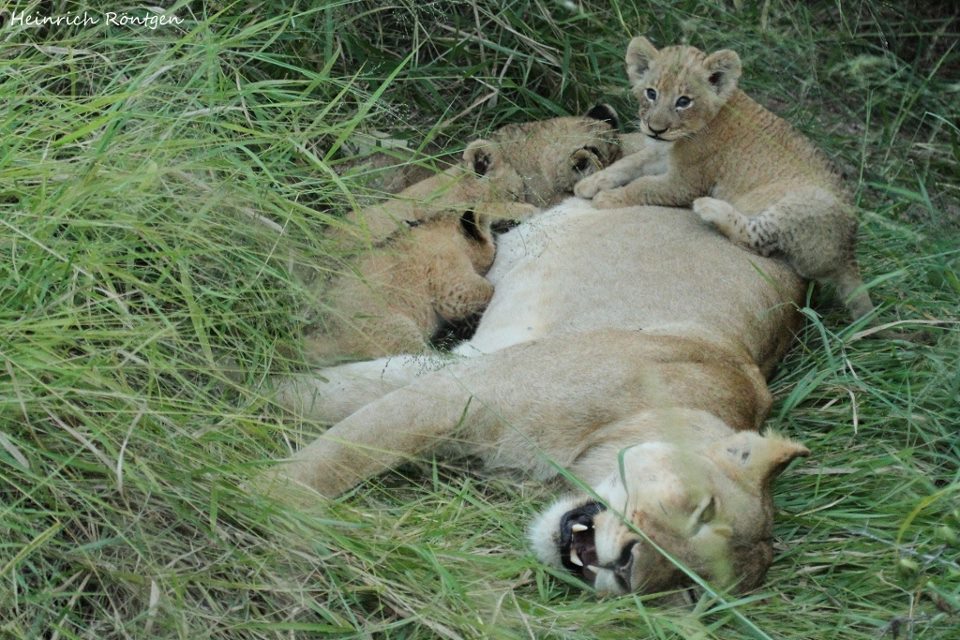 One of her den sites was discovered in the far north but this was short lived as the 4 Selati males entered the area on the rampage and forced the lioness to rush them far towards the east to safety somewhere. The lioness is moving the little ones a lot to try and keep them safe and we have only seen tracks in the last week. 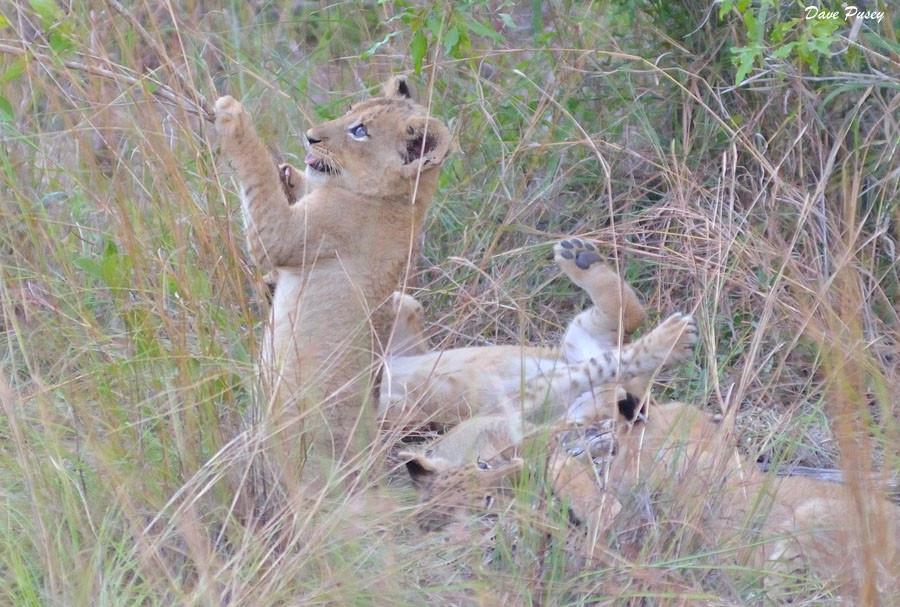 Painted Dog Pack
The pack is apparently faring well in the east, the Alpha pair were reportedly mating during the month and are possibly searching for den sites or even denning already. After being spoilt with a den site this time last year we can only hope they select a suitable termite mound den on our traversing area again to raise their pups!

Elephants
Parades abound and are relishing the feast before the onset of winter and the pickings become a little scarcer.

Buffalo
The massive herd has been in the south for most of the month, they lost an experienced member to the 3 Mapogo for the last time in mid March, now they have to contend with the formidable Selati males. Fascinating times lie ahead as we will continue to observe one of the ancient ongoing duels of Africa, now just starring new contenders.

Interesting sightings in March
Let’s not forget the little nocturnal mammals, an amazing sighting of a relaxed lesser bush baby during the month. 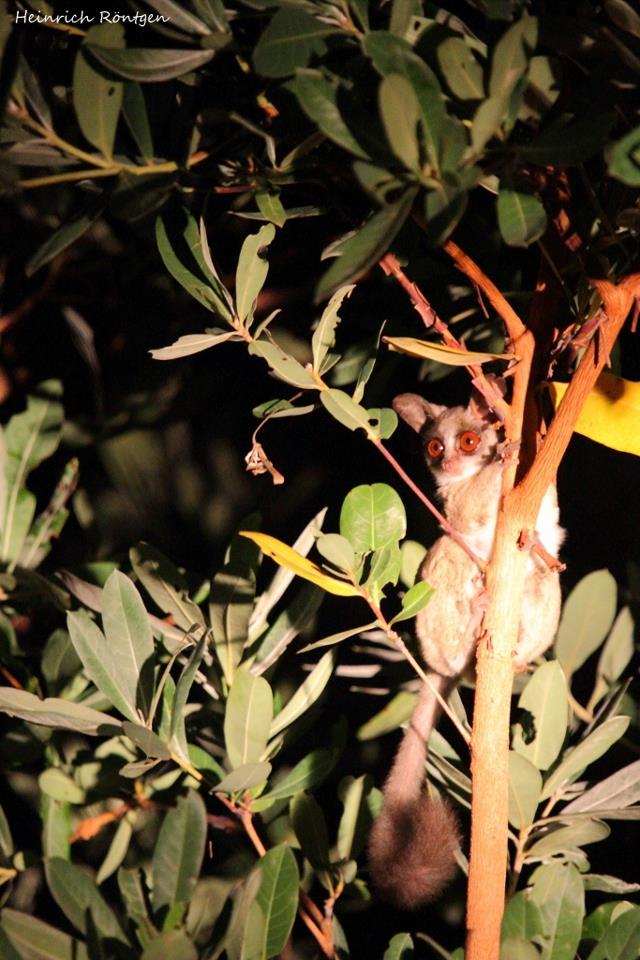 Female dwarf mongoose babysitter carrying a young one to safety. The sub ordinate females look after the Alpha female’s offspring. 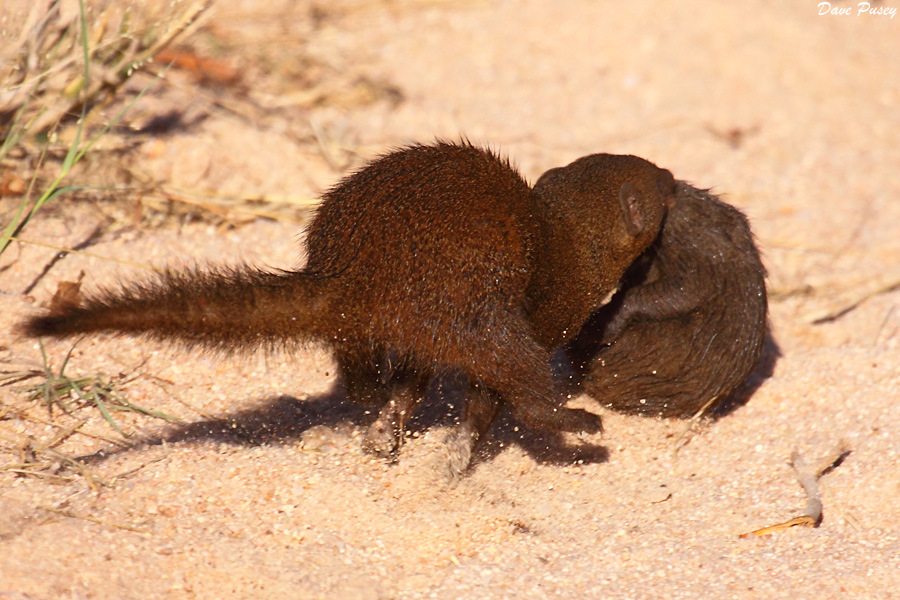 Along with other Intra African migrants, the cuckoos are beginning their migration, this rare sighting of an African Cuckoo in the open was probably due to a stop over for a rest on it’s way north! 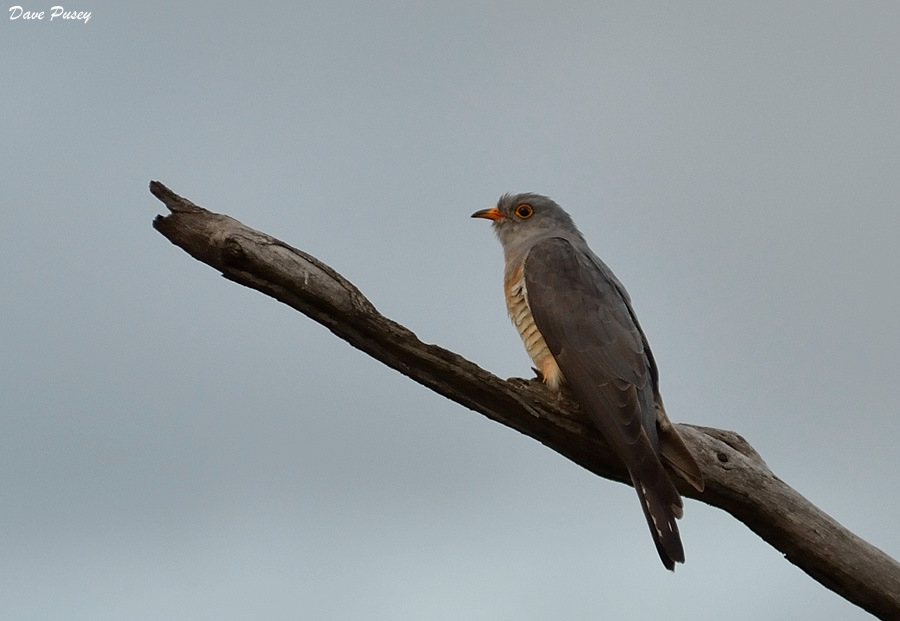