Leopard
Metsi and Cubs
Metsi caught an Impala on the Southern Part of Leopard Hills property, which she then took her 2 cubs two. The guests were spoilt with the 3 Leopards around the kill, with all 3 in and out of trees, which offered some great viewing. The two Cubs added to the excitement with them getting in and out of trees and constantly stalking each other and being very playful as these young cats are.
[FMP width=”640″ height=”360″]https://www.leopardhills.com/wp-content/uploads/2012/12/20110331-Metsi-.flv[/FMP]

Hlaba Nkunzi
She has been seen on the Leopard Hills property quite close to the lodge on numerous occasions and also back in the Lodge area, which is great having her back. Her remaining cub has been seen frequently, still on the Eastern Side of Leopard Hills Property, with Hlaba Nkunzi moving back to the North Western part of her territory and still going to the cub, but leaving her around that area.

Xinzele
This Male Leopard was around the Area of the Lodge again with him on the scent of another Leopard. We weren‘t sure of the identity of this other Leopard, but he was definitely on a mission! After going through some serious bush on the Northern Side of the Lodge, we spotted another Leopard which quickly moved away into some more bush in the distance. This Leopard wasn‘t relaxed and looked like a young male, which obviously wasn‘t too comfortable with the vehicles.

Incredible seeing the interaction between the leopards, with Xinzele on the trail of this other Leopard.

There were some reports of this Male Leopard being treed by Lionesses on numerous occasions – seems like he’s been given a hard time by the Lions in the area.

Never the less, this beautiful Leopard is still offering some great viewing as he’s really settled into the area. 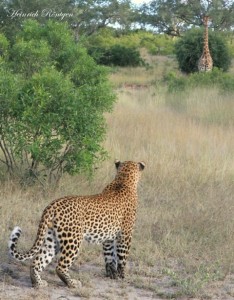 Cheetah
The Male Cheetah has been seen numerous times on drive, with him covering quite a lot of ground in the South. He was seen in a clearing where he went about his business, climbing on rocks to get a better look around and marking his territory as he went along. While he was calmly looking around he immediately jumped into long thatching grass leaping through the air after some Reedbuck, he covered a massive distance in a very short time – was great seeing this animal move!

Buffalo
There has been a herd of around 150 – 200 buffalo in the South, spending a lot of time in the open which has offered some amazing viewing. There are many youngsters in the herd, with some of them only a couple of days old. The herd was seen in one of the watering holes, having their morning drink and then moving off for their day’s grazing, while some of the older males spent more time in the water cooling off. It wasn‘t long before the older males joined up with the rest of the herd, with great interaction between all the members of the herd.

Lions
Mapogos
The 3 mapogos have been seen regularly, at times 2 of the males together with the other following some of the Xhimungwe females. After following them numerous times before and after sunset, we we’re privileged enough to Roar together while walking into the dark of the night.

The 3 Mapogos joined up on the Northern side of the Leopard Hills property, where they spent the whole day in shade. As the sun set they slowly started getting more active, with all three tightly bunched up, groomed and yawned where after they hauled their massive bodies up. Walking down the clearing towards the Lodge, at about 50meters apart, formed a “V – Shape” with the oldest in the front and the other two on the flanks – what an amazing sighting!

Xhimungwe Lion Pride
The females have been quite active, with the one mother being seen in front of Leopard Hills by the watering hole with both her cubs. She has been in and around the Leopard Hills property in the area of the Mabrak River, that’s in the front of the lodge, with her cubs. The Cubs are estimated to be around 10 weeks old, which makes it so much more special to view them. As they aren‘t seen too often, it really is a privilege being able to view them

Another of the Lionesses and her cubs were seen on a couple of big boulders, they were viewed for a good hour playing around, climbing into trees and showing some interest in their surroundings. 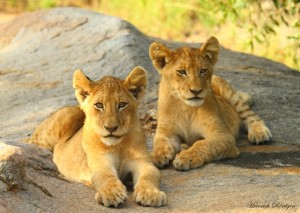 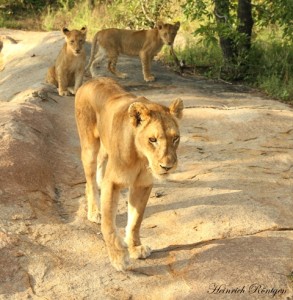 On an afternoon drive there was some great interaction between two lionesses and a young elephant bull, these two lionesses were lying on the sand in the Mabrak River, which had water after the rain. This young elephant then approached and a real “Cat and Mouse” game started, with the Elephant being the “cat” – which was a great animal behaviour!

Kiara and Megan filmed this Impala Kill by some of the Xhimungwe’s and they were joined by one of the Mapogos, what an incredible sighting. Thank you very much for the great footage!
[FMP width=”640″ height=”360″]https://www.leopardhills.com/wp-content/uploads/2012/12/20110331-Impala-KILL.flv[/FMP]

Rhino
There has been 5 or more Rhino on the Leopard Hills property, spending a lot of time on the clearings and close to the watering holes. Being very relaxed, they offered great opportunities for the guests to get up close and personal with them and take some awesome photos of these beautiful animals!

Sightings have been plentiful throughout the reserve and as always great enjoyment.

Elephants
Elephant Herds have been plentiful this month, with amazing sightings of breeding herds and bachelor herds. While viewing some of the Bull Elephants, some of them pushed each other around and created quite a scene with the sounds of the tusks clashing and trees breaking.

There was a massive Breeding herd of Elephant on one of the clearings, with them being very relaxed they moved along feeding, with some of the youngsters putting up a real display crashing through some brush.

Great Elephant activity this month with them in huge numbers.

Wild Dogs
The Wild dogs have been in and out of the traversing area during the month, with them being on the boundary of Leopard Hills Property for quite some time. The one female looked very interested in starting a den site close by, but they have moved east in the meantime. Hopefully they will return soon, as they’re always incredible viewing.

During the month of March we’ve had some huge thunderstorms that delivered quite a bit of rain. The one evening the rainfall exceeded 100mms, which made the Mabrak River in front of the Lodge come down. The Sand river has been full for quite some time and the Waterholes are all filled up which is great, as winter isn‘t too far away. 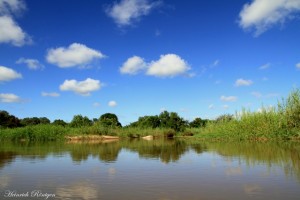 It has truly been an amazing Month with many special sightings and great moments. Can only imagine what April will hold, looking forward to the coming month’s game viewing.

Thank you to everyone visiting in March and to everyone coming in April, we’re all looking forward to meeting you and sharing our special place in Africa with you.