Leopards
Hlaba Nkunzi
A few wonderful sightings of her posing atop a Marula tree near the lodge kicked the month off to a brilliant start! She has however been seen less frequently later in the month as she has roamed a wider area trying to seek out all the dominant males she can potentially mate with. We did observe some very interesting behaviour exhibited by both her and Xinzele where they were seen searching for and then feeding on buffalo dung a few times! Possibly due to trace elements present in the buffalo dung that they are lacking in their diet this time of year or to help with digestion?? If anyone has any further information on why they may do this please comment. 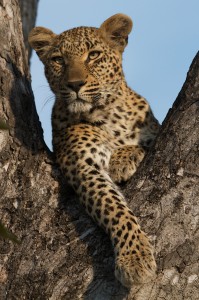 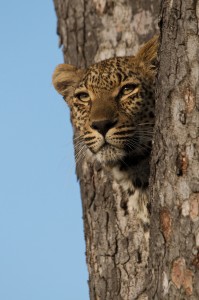 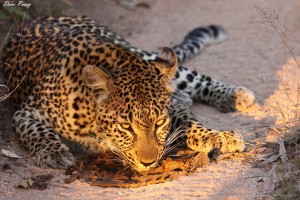 Xinzele
He hasn‘t been seen with Hlaba Nkunzi this month, he has been operating mostly in the north of his territory! He is currently very busy patrolling up and down while marking and calling, especially along the Sand river. We followed his fresh tracks for over 5km one morning before we eventually found him still moving briskly along!

This may be due to the Mashiabanje male being more active north of the Sand river and there was a territorial stand off between the two of them on one occasion, Xinzele on the southern bank and Mashiabanje on the northern bank. Xinzele is considerably bigger and more confident than Mashiabanje even though he is only a few months older, a confrontation may be imminent. 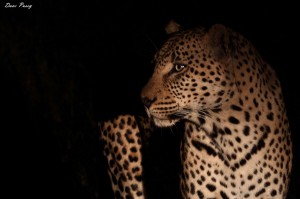 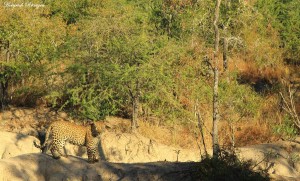 Mashiabanje
This young male has been seen north of the Sand river since the beginning of 2010, he is about 3and a half years old so a little younger and smaller than Xinzele. He seems to have claimed the vacant territory left by Tegwaan north of the Sand river. He is very relaxed and a joy to observe, we had a wonderful view of him in some golden winter grass one morning gazing hungrily at some impala. 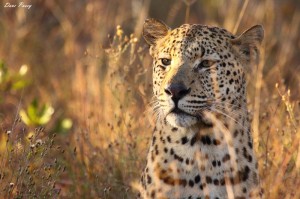 Tlangisa
She has been seen most frequently in the south and middle of the western sector as she tries to establish herself and claim a territory of her own. In her wanderings she was even seen on Leopard Hills’ main access road during the month, trespassing in the heart of Hlaba Nkunzi’s territory! 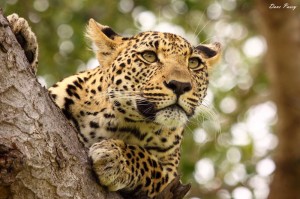 Metsi and cubs
She has been far in the south (in Mambirri’s old territory) where she had a reedbuck kill mid month, she left her 13 month old cubs there by themselves for over a week where they waited patiently for her. Towards the end of the month Metsi’s relaxed cub has been all the way up here at Leopard Hills on our access. He looks quite hungry and seems to be waiting anxiously for the return of Metsi to guide him to a kill. We think these 2 demanding male cubs are already being pushed out by Metsi and will become independent soon. 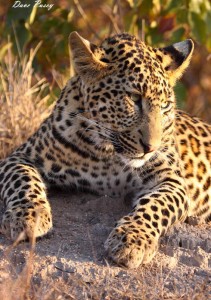 Lions
Ximungwe Pride
The older lioness with the 10 month old male cubs has been taking them all over our traversing area familiarizing them with the territory and the short tail lioness with the 6 month old cubs has been mostly in the north. The lionesses have been spending a lot more time together now that the cubs are older and when the Mapogo males are present we have quite a “Pride” of lions here! 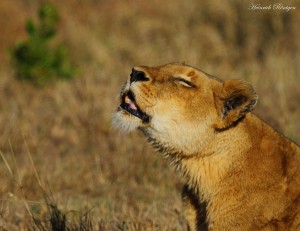 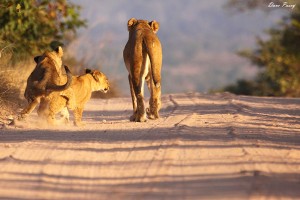 Mapogo Coalition
The 3 males spent the beginning of June contesting for mating opportunities with the 1 Ximungwe lioness who is still possibly in oestrus. They managed to kill a young hippo during the middle of the month which kept them busy for a few days. They have been vocalising intensely now towards the end of the month and there was a confrontation with the Majingilane coalition on Ottawa in the east (which seems to be neutral territory) on 19 June! The Mapogo came straight back west the next day with a few minor injuries, importantly they are still holding their own against the 4 younger males. 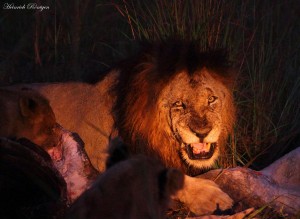 The other 2 Mapogo looking strong! 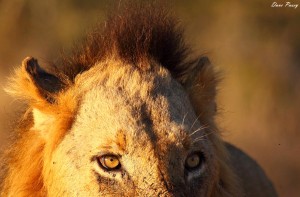 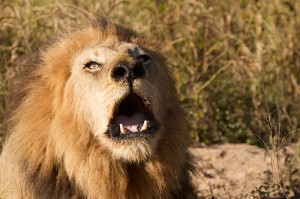 Southern Pride
This young pride consisting of 4 young males and 1 lioness are buffalo specialists and tracked the herd all the way from the east and killed one just over our boundary. It was the first time we have seen these lions and they were very nervous in the Mapogo’s territory! They ate their fill and quickly disappeared back east to the intimidating vocalisations of the mighty Mapogo roaring in the north! 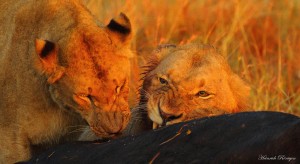 Elephants
Many seasonal mud pans have now dried up and the perennial rivers and permanent waterholes are a sure bet in the evenings if there is a parade of elephants in the area. Our guests have shared a few sunsets with animated parades, one really memorable such sundowner was the evening of the Lunar Eclipse and the rising Full Moon below. 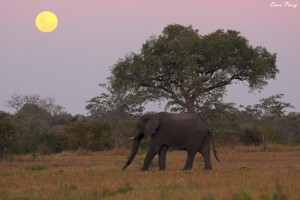 White Rhino
As usual the sightings have been regular and of high quality, lots of wallowing and interaction in the drying up mud pans. There have been regular sightings of the female with the 3 month of old calf who is now very relaxed with vehicles.

Buffalo
The large herd of 500 has been further towards the east for most of the month, we look forward to them returning west in July! We are finding more old bulls (Daggaboys) along the Sand river with the onset of winter, their commanding almost arrogant posture always commands respect! 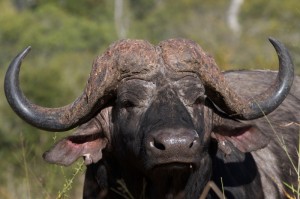 Hippo
This time of year we are blessed with Hippo being out of the water more during the day, this gives our guests a real perspective of the animal as opposed to just seeing the top of the head on the water’s surface. 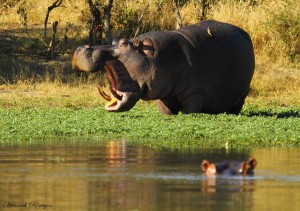 The female with the tiny 6 month old calf has reappeared after a long absence! We were incredibly lucky to see the calf a few hours after it’s birth in December (see image below), she has been moving between our camp pan and 2 other pans close to Leopard Hills. The cool winter weather has provided us with some fantastic sightings of the 2 of them out of the water during the day! 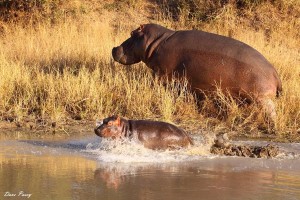 The below image of the wobbly youngster was a few hours birth in December 2010. 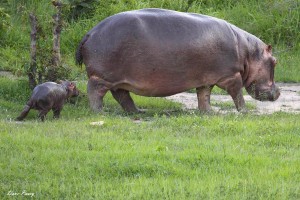 Painted Dogs Denning
We continue to take advantage of this once in a lifetime privilege of viewing the painted dogs denning. Most time of our time has been spent with the pups at the densite however we have managed to keep up with the pack hunting on occasion and have enjoyed some phenomenal roller coaster sightings. 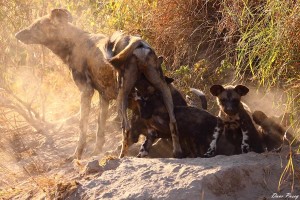 The pups are in a very playful stage learning hunting skills while wrestling and biting each other. They also establish the separate male and female hierarchies amongst each other during this phase. Their complex social behaviour also seems to be more learned behaviour as opposed to instinctive and each pack has a culture much like humans that is passed down from generation to generation!

Recently there have been a few tense moments as lions have moved perilously close to the painted dog den on a few occasions, luckily the pups have been safely inside! The Alpha female’s alertness has prevented any potentially disastrous altercation.

There have also been some other unwanted feathered visitors at the den! Some Hooded vultures were attracted by the regurgitation of meat parcels for the pups, this image below is of the bravest of the pups peeping out towards a vulture from the safety of the den. 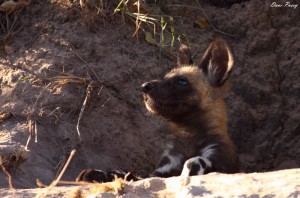 All this activity has prompted the Alpha female to move dens! A very wise decision from an experienced leader and mother! The new den is also a modified termite mound about 3 kilometres further south in a more open area where they can be quickly alerted to any potential threat. It must have been a scary trip for the 11 week old pups, 3km of potential danger but also a great learning curve and confidence booster!

There is always much interaction between the pups and adults as they continue to establish their social status, look at the folded back ears and exposed belly of this submissive pup below. 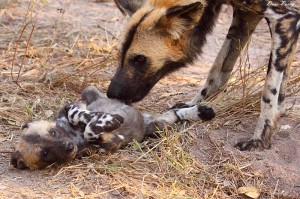 The adults have to hunt more regularly at the moment to provide for the hungry bellies, they came across a young hippo in a waterhole the other day and this dog showed more than a little curiosity! He looked like he wanted to swim over to the Hippo…looks like easy prey when you can only see the head above the water! 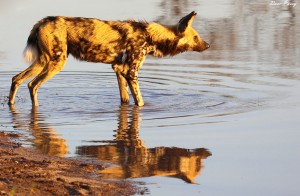 It is all looking very positive for the pack and if all goes to plan we will have a healthy pack of 14 dogs in a month or so once the pups are large enough to run with the adults!

Interesting Topic: Winter Birding
It is often believed that birding is more of a summer pastime with all the migrants being present here!

Well to be honest winter can actually be just as productive, if not more so as the vegetation is thinner and the resident birds are easier to locate. They also spend more time sunning themselves in exposed positions in the early winter mornings providing fantastic viewing and photographic opportunities!

Birds of prey are plentiful around our camp and the following eagles are regularly seen: Bateleur, Martial, African Hawk, Tawny, African Fish, Brown Snake and in summer Wahlberg’s.

The smaller Accipiters are also plentiful, including Gabar, African and Dark Chanting Goshawk, Little Sparrowhawk, Lizard Buzzard and the Shikra.

The Sand River is a hotspot and produces a number of rarities including the secretive African Finfoot, Whitebacked Night-heron, Blackcrowned Night-heron, Purple Heron, African Black Duck, Half Collared and Malachite Kingfishers and African Crake.

The adjoining riverine forests may deliver Black and Grey Cuckooshrike as well as African Pygmy Kingfisher .

Spotted Eagle Owls are seen regularly in the evening, while the Verraux’s Eagle Owl, the second largest owl in the world, is heard calling at dusk and dawn and we are lucky to spot them occasionally along the riverbeds. African Barred, Pearl-spotted and African Scops Owlet are often heard and less often seen. 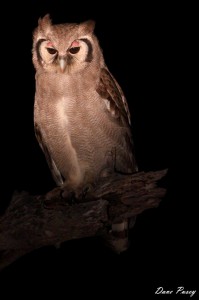 The spectacular bee-eaters complete a photographers’ portfolio, including the resident Little, White-fronted or in summer the Southern Carmine Bee-Eaters.