It has been a month of great sightings again……….

With the onset of winter the morning drives are getting a little chilly, but as we all know this hasn’t detracted from the game viewing.

Leopards:
Hlaba nkunzi and her 2 cubs have been a highlight on a good few safaris. In the begininig of the month she stashed her 2 cubs behind the boma on a pile of rocks, there is nothing like going on drive and the first thing seen is 2 4 month old leopard cubs.

Makubela has unfortunately lost one of her cubs to a mapogo and in that particular sighting her kill too!!! She was also reported injured on her back leg, we will keep you updated on her progress.

The Tegwan male has also been around doing his male thing covering about 5000 hectares. There has also been a young male leopard moving around in his territory but it seems like he is keeping a low profile. 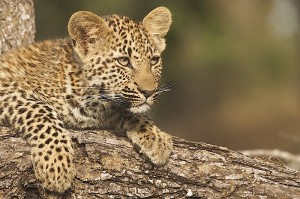 Lions:
I posted a artical on the blog about one of the mopogo’s that was beaten up and killed by a young coolition that came in from the Kruger Park, I have since located a short video of the fight, (not for the faint hearted) check out the link,

The Ximungwe pride has 4 additions to the pride. One of the female has brought out her cubs to show, we estimate them to be about 2 months old.

Only yesterday night I had a sighting of the Ximungwe females. I decided to follow them, they started to hunt a herd of impala at sunset, after a missed attempt the impala the impala started running back towards the lions. We didn’t understand this at the time but what happened on later on in the sighting explained it all!!!!!

After all this mayhem a male lion came strolling up the road and met up with the lionesses, but this wasn’t the reason for all the chaos, they met under a marula tree and proceeded to do the lion greeting thing, there was alot of growling etc, but most of the growling was coming from up the tree. Little did we even know that the Tegwan male had bee chased up the tree by the sight of the lions, so 3 lions and a leopard in the tree, this was the reason for the impala running back at the lions amazing………

The Ottawa pride has lost one their cubs but the rest of the cubs are doing well and are seen fairly often on the eastern part of our concession.

Elephants:
This has been the month of elephant sighting, there has for some reason been elephants all over our traversing area. There has also been regular sightings of about 6 old bulls that are in musth which has made for some interesting viewing.

Buffalo:
The big herd of 300 odd has made a few apperances on our property but other than that a few herds of “Dagga Boys” bachelor herd have been spotted. We do have one less buffalo thanks to the mapogos which provided us with about 4 days of great lion sighting from the lions to hyaena to the vultures that came to finish the carcass off. 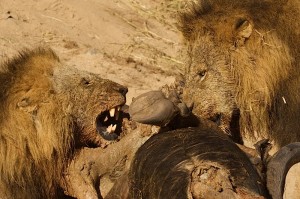 Wild dogs:
We only had one but never the less very special sighting of the pack of wild dogs this month, this was special because in 6 visits the Phillips family hasnt seen them and on their last afternoon drive we saw 5 dogs, hope you guys enjoyed. 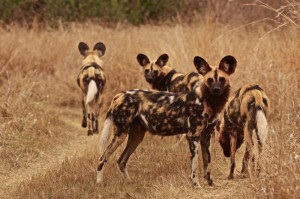 Gary and the team.