The bush has noticeably dried out now, browns and oranges predominate with the wind bringing in dusty mornings and evenings and dramatic colours and landscapes. Game viewing is superb in the low vegetation and birdlife has improved as some species migrate down from the higher areas seeking the lowveld warmth! 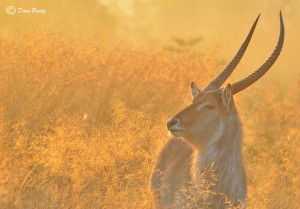 The Sand river is very low and easy to tip toe across! 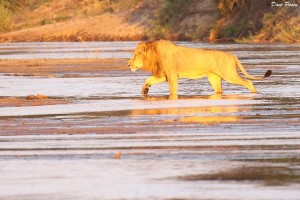 Leopards
Hlaba Nkunzi
Wandering far and wide during the cool sunny mid winter days, she is covering even more ground than usual, turning up in places where we would expect other territorial females. She has especially been exploring further north right up to the southern bank of the Sand river. The low vegetation and water levels plus higher density of prey is possibly enticing her there. She hasn‘t been seen with any of the males for the month so could very likely be pregnant and scouring these areas for safe den sites 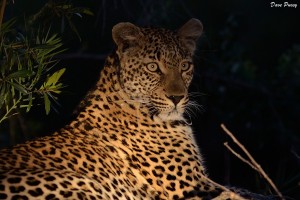 Still up in the north in a very thick area and we are patiently waiting for a good sighting of her so we can put up some images! She is missed more than any other leopard at the moment and it just reminds us of how spoilt we were in the last year by her playful nature and all the classic poses she provided us with!

Metsi
Also mostly up north in her territory this month we were lucky to find her with an impala kill and hence enjoyed her in the same place for a few days.

Here she is looking rather satisfied with a full belly after quenching her thirst!

No signs of a litter…will see if she begins mating again!

Xikavi
As usual in winter she seems to be almost entirely north of the Sand river, maybe pressure from the southern females coming up from the drier south to seek all the attractions of the alluring river!

A typical intent glare directed at us through the long grass from this elusive female.

Shangwa
Interesting mating interaction involving the Dayone male has dominated her July! She followed him around so persistently for 2 weeks, even incurring a few minor injuries from his impatience with her! She also received a nasty gash from a warthog tusk, see below!

She has seen it all before though and is not too bothered about winning over a young 5 year old male! Her experience came through at over 13 years old and this mating could provide her with her last litter so she is giving it her all.

Kashane
Not seen much in the west this month, let’s hope to see him in August.

Dayone
Firmly entrenched as the dominant male in the central west he has also pushed a tad further north to the southern bank of the Sand river! His month has been spent mostly with Shangwa female as well as patrolling his huge territory! 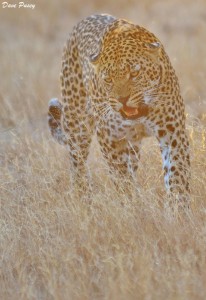 New Male
The north western sections of our traversing area have been a mystery since Xhinzele and Mashiabanje disappeared in January this year. We have seen distinctive tracks of a skittish male with a splayed left front paw and managed to get decent view of him one night, apologies for the poor image but at least it is something! This may be the dominant male in the north? Time will tell if he becomes more relaxed. 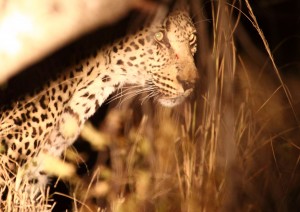 No good quality leopard video this month due to technical issues, no doubt the video cameras will manage to capture a cracking August. 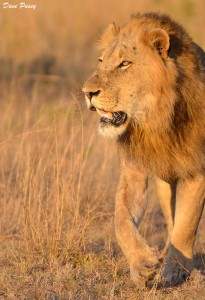 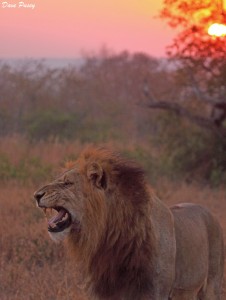 No time to enjoy the sunrise, performing the Flehmen grimace while on the scent of an alluring lioness!

Mating pairs abound as the boys become men and entrench themselves in the western territory of the Sabi Sand. There are so many mating opportunities for them, especially the 4 Ximhungwe lionesses and to a lesser extent the 3 Othawa lionesses who are most likely all pregnant. See video. 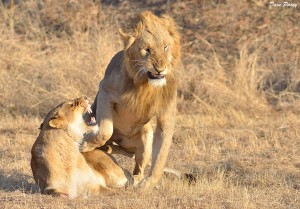 A tail flick of a Ximhungwe lioness signals for him to follow. 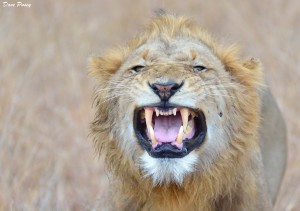 The Selati males still have to work hard, constantly checking a lioness’s urine while performing the Flehmen grimace. We were treated to this fascinating behaviour around a waterhole, the poor lioness couldn‘t even take a breather to quench her thirst with this male’s persistent pestering!

In between all the mating they must eat! See below image of one of the males drinking with some buffalo blood on his paw! 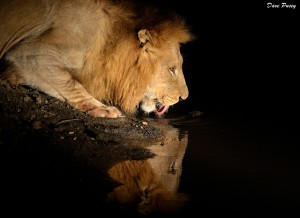 Ximhungwe pride
We are rather sad to report that the lioness who gave birth on a hill just to the west of us was seen carrying a weak looking cub that died shortly afterwards! We are not sure what the litter size was and what happened to the others but it doesn‘t seem that it was the Selati males.

The thirsty lioness drinking from our camp pan just before she gave birth, see her bulging belly! 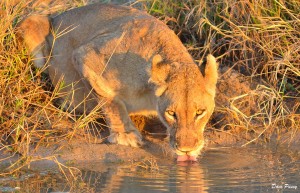 Carrying the little one past the camp. 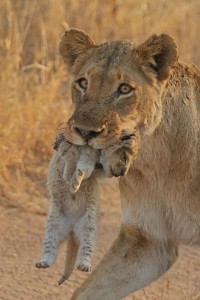 The 3 sub adults are flourishing and have been baby sat by one of the lionesses while the other 3 lionesses are away mating and distracting the Selati’s! 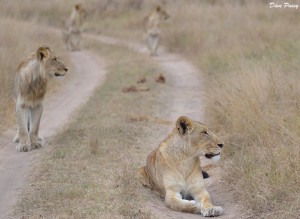 Here they are crossing the Sand river to the safety of the north! We are all rooting for the survival of these 3 brave souls who have fought so hard for their survival and have come so far since the takeover. 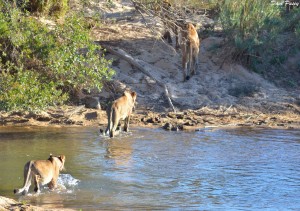 Othawa Pride
Most likely all 3 are pregnant and we will probably see a first litter emerging quite soon.

Painted Dog Pack
Still denning in the east…we wait for them to head west towards us on a hunting foray. We will definitely see them here more often when the pups are older and can run with the pack.

Buffalo
A number of herds all over this month, here we caught the spectacle of a morning drink.

Notice the hippo threat display in the background and if you look very closely and African fish eagle is in flight over the waterhole. What an African winter scene!

Elephants
A picturesque drive along the lush Sand river in the afternoons is sure to provide a view of a parade enjoying their evening drink as smaller pans are now mostly dry!

Hippo
Currently the numerous rafts are spending a lot of time out of the water soaking up the warm winter sunshine. If they are startled it is an awesome sight to see them charging at full pace into the safety of the water. 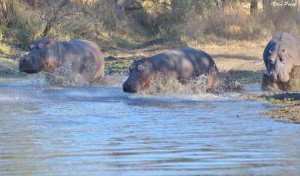 With their invaluable real estate shrinking they are becoming more protective over their precious resource as seen below when an obstinancy of buffalo arrived and took over.

This adolescent male entertained us with his curiosity and attempted show of dominance! You need to grow bigger canine teeth young chap! 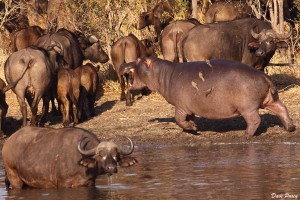 Interesting sightings in July
We came across this unusual looking red headed raptor one morning (funny how ginger jokes were suddenly dished out in the direction of the ranger!) 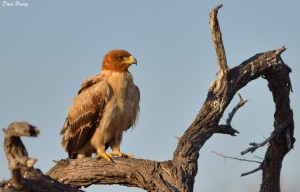 Seriously this is quite a common bird of prey but this is the rare sight of a moulting sub adult. It is indeed a tawny eagle!

See below image of a mature adult female tawny eagle finishing off the spine of a grey duiker that she stole from a spotted hyaena. 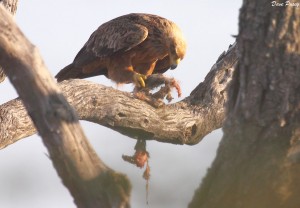 See if you can decipher the morning newspaper of the bush and can pick out the tracks in the fascinating sequence below! 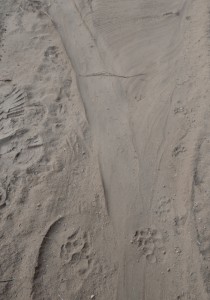 If you look closely you can see the tracks of a honey badger that dragged his formidable rock python victim along the road . A genet and a civet were then following to see if they could share in the spoils. AMAZING! Imagine being witness to such a sight!

A male coqui francolin in full song, not seen and heard too often! 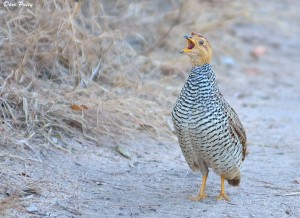 One thought on “Rangers Report July 2012”