It has been a very wet but productive month…….

Leopards:
Hlaba Nkunzi:
Hlaba Nkunzi has been spotted a few times since the tragic event of one of her cubs being killed by the Xinzele male. The unfortunate thing is that she has been hanging around in the eastern section of our traversing area. Hopefully she will miss Leopard Hills and make her way back this side. 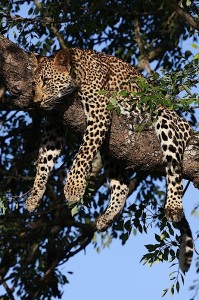 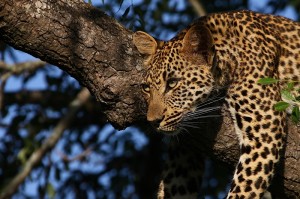 Xinzele:
There have been a few sightings of the Xinzele male, he seems to be laying down the law in the middle part of the western sector. This behaviour is the norm for an up and coming male, with there being no dominant male (Tegwan) in the area he has been calling and marking territory in a big portion of our traversing area. This does mean that he may take up residence here.

Khashane:
We have only have seen him on 4 occasions. Gary and his guests saw him relaxing on a rock in the shade which was great for pictures, actually soo good we came back to the sighting for more pictures. 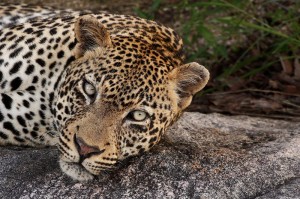 Mambirri and Thlangisa:
Mambirri has been spending a lot of time east and north of her old territory and her daughter Thlangisa has remained in her mother’s core territory. Thlangisa continues to provide us with many quality sightings and she is living up to her “playful” name spending a lot of time posing up trees. Some concerning news at the end of the month is that Mambirri was found with a very bad injury to her one paw and is battling to move comfortably. We haven‘t been able to locate her since then and she has been hiding in thick bush, hopefully recovering as cats have amazing healing powers! 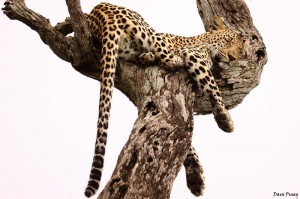 Ximungwe Pride:
One of the females has 2 cubs we estimate around 5 months old now and we have had some great sightings as they have become more relaxed with the vehicles. Dave and his guests were really lucky to get them in the open river bed one morning. She has been taking strain moving big distances and hunting on her own and has lost condition as lionesses with cubs often do, it is a hard time for her but she will bounce back. One other female has cubs hidden in one of the hills west of our camp and the remaining 3 females are most likely pregnant at the moment. 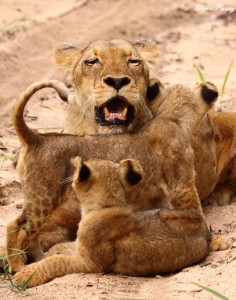 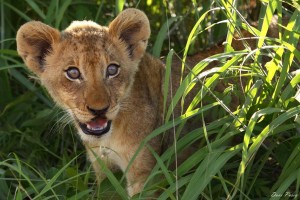 Mapogo Coalition:
There are a confirmed 3 Mapogo’s left in the coalition, for a while in early Jan there were only 2 around. The male with the bent spine was not seen for a while and was looking a bit weak, we feared the worst as he was last seen going east. Great news is that he was back the last few days of the month looking healthy and strong and roaring intensely below Leopard Hills Camp the one evening (See blog entry on 26/01/11). There has been some more mating with the Ximungwe females, we believe some of the females are in pseudo-oestrus (mating but not ovulating) to keep all the males happy after all the cub losses last year.

Buffalo:
The large herd of around 500 has been down in the south for much of the month of Jan. We have had some excellent sightings of these animals, drinking and bathing in the multitude of waterholes that have popped up after all the rain. 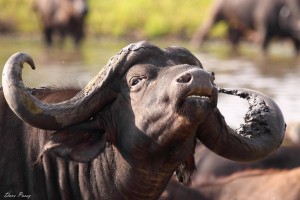 Elephant:
With some warm days in between all the rain we have been treated to a few top sightings of the young bull elephants playing and swimming in the pans! Always a joy to watch as these guys display dominance behaviour and mount each other as they swim.

Rhino:
There have been sightings of quite big crashes of rhino this month but due to the rhino poching problem in south Africa at the moment we were stongly advised by the South African NationalParks not to share locations.

Southern Ground Hornbills:
We were extremely thrilled to have a sighting of Southern Ground Hornbills on Leopard Hills property for the first time in years! What was really interesting was the makeup of the group…2 adults and 2 sub adult helpers, possibly a relatively new group looking for a territory. They were a little shy making a photo opportunity difficult, let’s hope they stick around here!

On drive we are going to be looking out for the below tracks (Quite large at 15cm) and of course if we’re lucky, this rare beautiful bird.

Let’s take a look at the behaviour of these fascinating birds
The Southern Ground-Hornbill occurs from Kenya and the DRC to Southern Africa, where it is widespread but never common, living in a wide range of grassland, savanna and woodland habitats. In South Africa, it has just gone from Vulnerable to Threatened with an estimated population of just 1500-2000 (About 600 in the Greater Kruger).

It eats a wide range of food, especially animals such as grasshoppers, frogs, mongooses and bird nestlings. It forages in groups, so that when one bird locates a prey item it can signal the rest of the flock with a low bark. It often finds prey by digging, especially in dung heaps, and it may snatch food from birds of prey.

It is a monogamous, cooperative breeder, with a group consisting of a dominant breeding pair and 0-9 helpers, who are usually either adult males, or juveniles from previous breeding seasons.

Threats:
It’s South African distribution range has decreased hugely recently, due to persecution and habitat alteration. It is generally revered by African people, but it is also feared, leading to rare cases of it being collected for “muti” for bringing rain.

We have just had guests who were inspired to help conserve this area and donated to the EWT, check out their website www.ewt.org.za. For more information on Southern Ground Hornbills contact Scott Ronaldson at scottr@ewt.org.za.