Superlative summer weather and cloudless starry nights have illuminated February after a waterlogged start to 2012. The sweltering sun has radiated down and dried up much of the transformed landscape, game viewing has been sensational as animal activity has peaked during the fine weather and plentiful supply of food.

Leopards
Hlaba Nkunzi
Her time has been spent mostly in the east of her territory where we presume her cub is hidden. She has as usual spoilt us with sporadic visits through the lodge area, she will typically saunter down the pathways nonchalantly while scent marking and checking in at her preferred lodge! 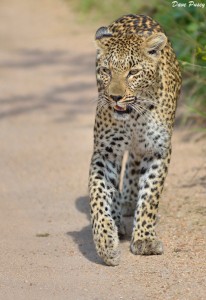 We are all really looking forward to her “introducing” us to her cub in the next month! She will begin to lead the youngster (almost 9 weeks old now) to her kills soon which should provide some great viewing! 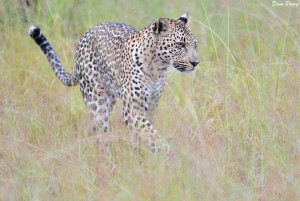 She has settled in the area north west of Leopard Hills, her behaviour is becoming more and more indicative of a territorial female as she approaches 3 years of age! She is trying to win over the Dayone male’s confidence and convince him she is mature enough to raise a litter. 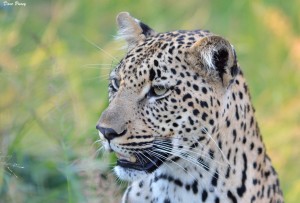 After a brief scuffle she learnt her lesson while watching the irritated badger trot off looking back at her in disgust, almost insulted that she even attempted an attack! Our guests were all overwhelmed with the foul smell which the poor young leopard was trying to remove on every bush she walked past!

A trip down memory lane! See if you recognise the triangular spot pattern on this little 6 week old cub, image taken on 26 May 2009! 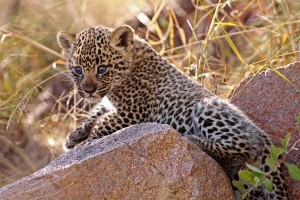 Just a reminder of how privileged we are to be able to witness the development of a little helpless cub into a stunning adult female leopard!

Named “Thlangisa” due to her playful nature, she has become our most relaxed and photographed leopard and we look forward to sharing the next chapter in her life as she comes of age, settles in her territory and raises her first litter!

Metsi and cubs
She has been seen up in the north of her territory, exploring a lot around the granite hills west of us. We hypothesise she may be pregnant looking for den sites and reinforcing her territory in preparation for having to provide for her next litter.

Her 2 sub adult male offspring have not been seen again this month, at almost 2 years of age they have probably wandered off in search of new terrain.

Xikavi
Limited accessibility along her sand river territory has meant no sightings of her this month.

Shangwa
There have been a couple of sightings of her and frequent sightings of her sub adult male cub (now 14 months old) north of the river. He is growing fast, looking very healthy and somewhat large for his age! See below image. 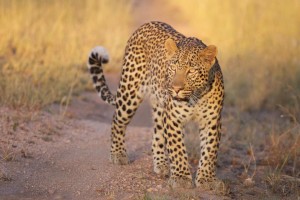 Xhinzele & Mashiabanje
No sightings of both of these dominant males since the flooding which raises many unanswered questions as to their whereabouts and what may have happened! It is possible that one or both of them are still somewhere in the far north, time will tell.

Kashane
There have been a number of sightings of this formidable male passing through while patrolling on our eastern side.

Dayone
He has been roaming far and wide, gaining in confidence and purposefully patrolling while looking to expand his territory north and east! With Xhinzele up in the north he has very little competition currently in the central western area.

He has been seen frequently with the youthful Thlangisa female, whether they have mated is debatable…the feeling is that she is still too young but possibly in the next 6 months. 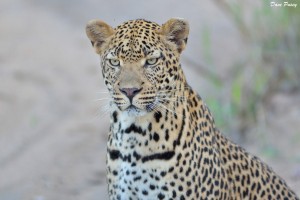 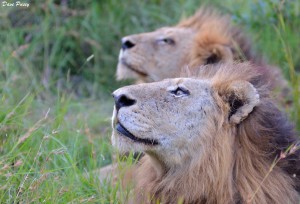 The ruling trio have been together for much of the month, they need to be united as the 4 southern pride males have been venturing closer and closer this month…a serious clash could be imminent!

They spent some time trailing the large obstinancy of buffalo in the south and one afternoon an unbelievable sighting unfolded in front of us.

Let the below sequence of images tell the story… 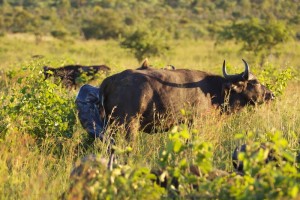 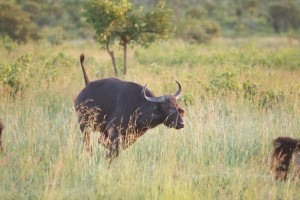 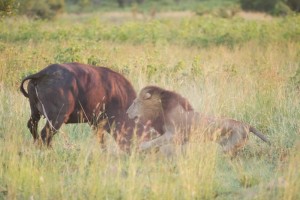 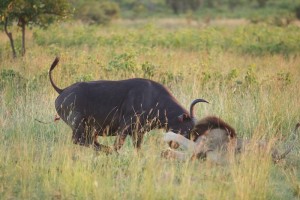 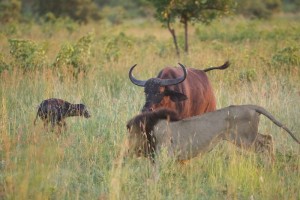 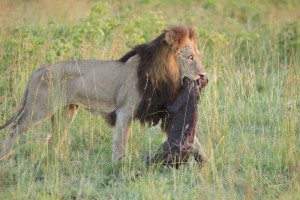 To see a buffalo give birth is rather unique but then to witness the eldest member of the mapogo charge in and challenge the resilient female for her calf was truly beyond the imagination! Unlucky for the calf but the wise old male is always on the lookout for an opportunity.

Ximhungwe Pride
The 3 lionesses with their four cubs (Ages ranging from 7 to 13 months) have been all over our traversing area this month, the cubs are full of energy, healthy and strong (See video update)

There are 3 male cubs and 1 female which is fantastic as she will be absorbed into the pride if she survives to adult hood, another lioness is needed as they are now down to 4. 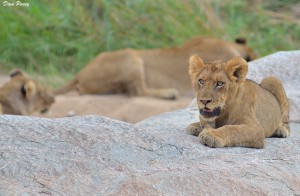 The Ximhungwe lioness without any cubs has spent almost the entire month on her own and there were reports of her being seen with the southern pride males east of our traversing area.

Painted Dog Pack
After a month long absence from our traversing area they appeared briefly far in the north over the last few days and all 9 (6 adults and 3 sub adult 10 month olds) are looking in top condition.

Hippo
We weren‘t sure if the “Hippo Pools” section of the sand river would still live up to the very apt name after the flooding…Well, the hippos have returned to the exact same spot and it is now far more open allowing for much improved viewing in the tranquil riverine setting.

These sparring young males were playing around while we were enjoying a morning bush mix and muffin. 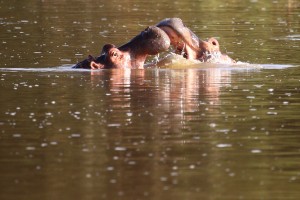 Elephants
Parades are in abundance and relishing all the ripe marula fruits – lots of little calves are around, we came across this tiny 3 day old chap crossing the Mabrak river bed, his legs still a little wobbly.

Thanks Kiara for this picture below! 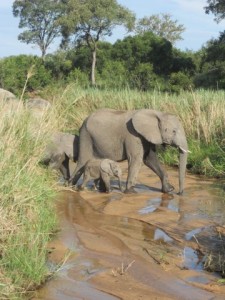 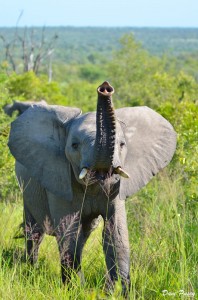 Buffalo
The large obstinancy has again been seen frequently in the south along with regular sightings of “Daggaboys” up in the north along the river.

Bird quiz
These often overlooked little birds are brood parasites (they don‘t raise their own chicks, they lay their eggs in a host species’ nest which then raises the “adopted” chicks). 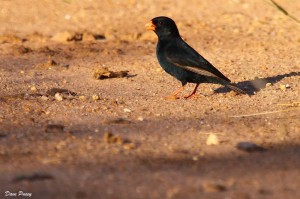 This is a male currently in his colourful breeding plumage, in a few months he will moult and return to the dull winter colours similar to the female.

Frogging Fiesta
For keen adventurous guests and staff this is the prime time of year to head out in the evening with a torch, a net and some gumboots or old shoes to see how many species of frogs we can locate in the multitude of temporary lowveld pans.

Frogging is all about the sights and especially sounds of the African night as frogs are mostly located by their calls as the males recite vociferously attempting to locate females! It is a real challenge but loads of fun to pinpoint their position as they often call from concealed positions on the banks of pans, in inundated grass, reed beds or open water in the pans. .

This is a male painted reed frog in full cry, his vocal sac fully inflated looking for attention! 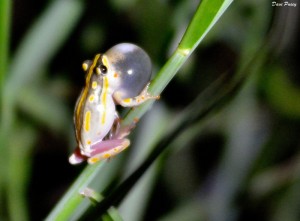 Once they are caught we identify them, take a few pictures and then release! Our record has been 10 species at 1 pan this year (34 species in total occur in the lowveld).

The images below are some of the amazing discoveries we have come across whilst out frogging, we even saw a bullfrog kill!

Thanks to our maintenance manager Evert for his great image below of an african bullfrog that caught a katydid. 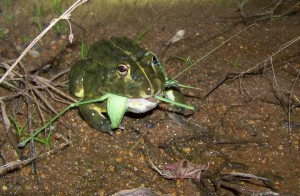 This is the very colourful yet poisonous banded rubber frog, we need to be careful when capturing this species not let them come into contact with a cut. His colours are a warning to predators that he is distasteful (Aposematic colouration) 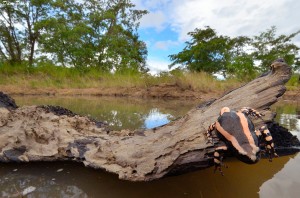 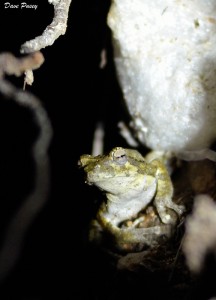 The same female foam nest frog in her cryptic daytime colouration blending in with the bark. 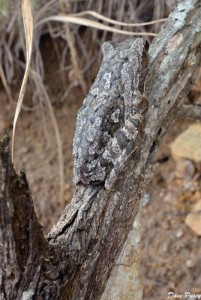 Little foam nest tadpole dropping into the water after approximately 7 days in the foam! 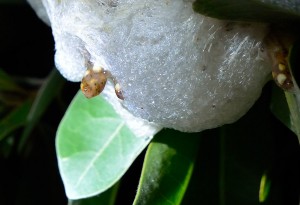 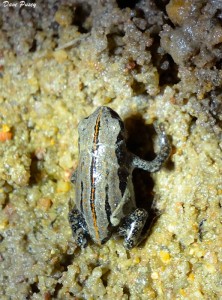 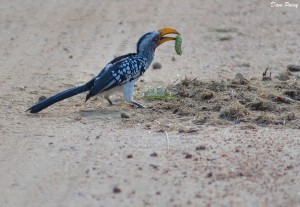 Village weaver breeding is in full swing, here is a male calling and flapping his wings in display to attract a female to inspect his “palace”. If she rejects the nest, he will often destroy it himself afterwards. 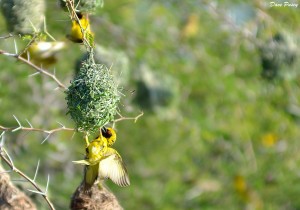 A successful fisherman along the Sand river, the green backed heron often uses bait such as a feather, insect, spider or piece of paper to attract fish to the surface before snapping them up! 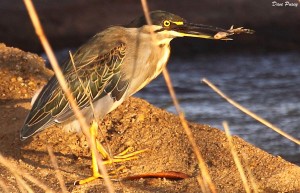