The windy month has brought in warmer weather and even more spectacular evening colours, the last rays are particularly striking as they paint the crystal clear waters of the Sand river. Many of the migrant birds are relishing the warmth and are back a little earlier than usual this year.

Saddle billed stork silhouetted against the Sand river as it turns various shades of pink for us. 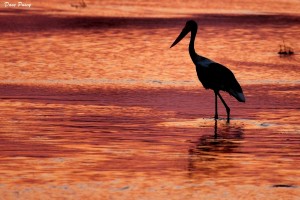 Plenty of fine dust for this stallion to roll around in while one of his heavily pregnant mares is too rounded to partake in such a fun afternoon activity,we are hoping to see a foal in the next few days. 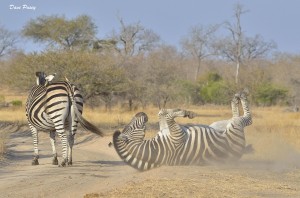 Leopards
Hlaba Nkunzi
Displaying a gutsy show of strength she seems to have pushed Xikavi north and seized some of the prime territory all the way up to the southern bank of the Sand river. They had a serious territorial encounter that left Xikavi with a big gash on her front left leg (See images). Hlaba Nkunzi is not the largest female but she makes up for this with her guts and determination that surely stems from the strong gene pool of her legendary mother, Makwela! 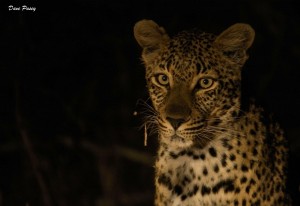 She is most likely close to giving birth, watch this space in the next few months! Whether she will bring her litter back to the cave in front of Leopard Hills remains to be seen, we are holding thumbs. See video of her on a huge impala ram kill!

Thlangisa
She has claimed the territory further north where it is very dense and has only been seen on a few occasions.

Metsi
This wily female is also possibly pushing Hlaba Nkunzi a little from the south as she prepares for a litter soon. Only seen a few times this month we are not sure exactly what has happened since she seemed to lose a litter a few months back and she hasn’t been seen mating again! 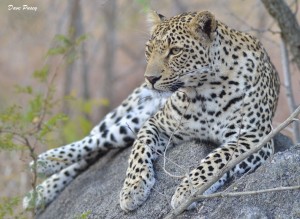 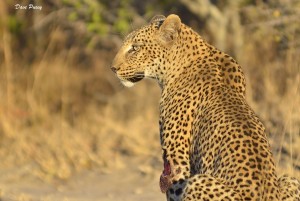 Apart from the above mentioned clash with Hlaba Nkunzi that left her with this nasty looking injury, she has been vocalising and marking a lot along both banks of the Sand river.

See a rare image below of her out in the open on the Sand while crossing the aptly named river. 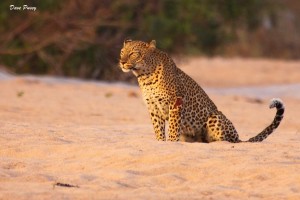 She had a brief sojourn down through Leopard Hills while she was following Dayone as he was patrolling, she was hoping to mate with him but he was not interested! See video!

Shangwa
Also found a few times along the river there are lots of females vying for prime space in the winter. She hasn’t been seen as much as last month when mating with Dayone.

Kashane
Not seen too often this month in the west of his territory. 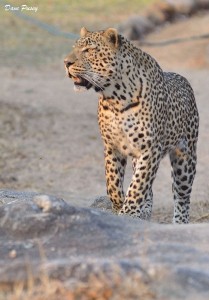 Roaming all over the west he has even been seen crossing the Sand river doing a little exploration in the north! He just seems to be getting bigger and bigger, well and truly living up to his impressive genes (Father is the dominant 12 year old Sand river male who is about 40km away to the east).

See image of his father below who only has one eye after one was lost in a territorial clash! Amazingly he still holds a prime territory and has adapted well with his loss of depth perception. 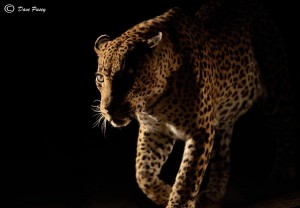 Being the most relaxed male leopard for many years we are really being spoilt with some educational behavioural sightings of him! Showing very few battle scars, he truly is a handsome photogenic specimen of a male!

Unknown Male in the north
This unknown male that occupies the Sand river and northern territory was seen again a few times, still shy but a quick glimpse is possible and even a photograph if you are very quick on the draw!

See very closely cropped image below for an idea of his size and imposing stare! 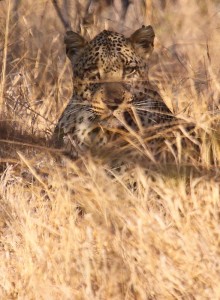 Maxabeni young male
This young warthog specialist treated us to a few days of fantastic viewing when he killed a warthog in the south where he has been hanging out! See video for some interesting interaction with a mother hyaena and her cub that sniffed out the kill! 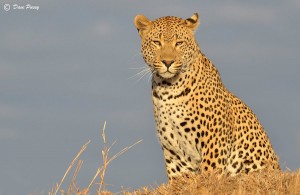 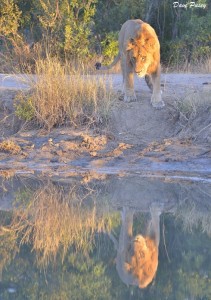 This was taken at Leopard hills camp waterhole!

The boys are learning all about life as the dominant force in the Western Sabi Sand! Their emergence and coming of age has thoroughly entertained our guests this month. Most of this has happened in close proximity to Leopard Hills.

So what goes through the mind of a Coalition member as winter draws to a close?

Look for lionesses in oestrus : Fight with brothers over a receptive lioness : Mate with lioness : Get a slap in the face from a lioness! 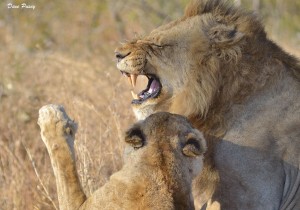 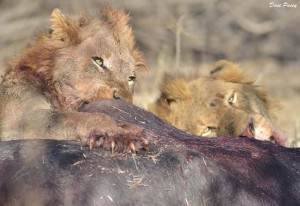 Lie next to buffalo carcass with full belly and chase off hyaenas and vultures. Realise this is a futile exercise and leave skin and bones for scavengers. 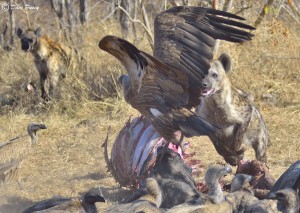 Ximhungwe pride
Quite fragmented again for most of this month due to much interaction and mating with the Selati coalition! Things seem to have settled a bit the last few days and all four lionesses have been seen with the males and looking very relaxed with each other. Perhaps some stability has settled over the lions after the takeover!

One of the Ximhungwe lionesses almost met her match as she took on this massive warthog boar! See the size of his tusk and the big gash under her chin! 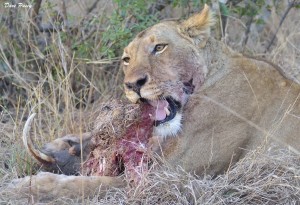 Othawa Pride
Most likely all 3 are pregnant and we will probably see a first litter emerging quite soon…watch this space.

Pack of Painted Dogs that denned here in 2011
Our patience has finally paid off and now that the 6 little pups are around 3 months old they are just big enough to run with the pack! They returned here in the last few days on a hunting foray with the little ones trotting behind!

We have since enjoyed a number of sightings of the 14 painted wolves and let’s hope they remain in the area and choose a temporary den over here. 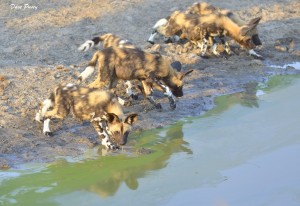 New Painted Dog Pack of 5
A sure way to turn a relaxing game drive into one of frantic excitement is for one of the top 3 most endangered mammals in Africa to arrive on the scene! In the beginning of the month a pack of African Wild Dogs appeared out of nowhere and came charging through our traversing area, turning the bush in to chaos.

It was surely the good luck brought by our regular guests Arnold and Joan Kalan who are here for 10 days with their granddaughter Rachel on her first safari. We haven’t seen the painted pack for a few months so we weren’t too optimistic of a visit! 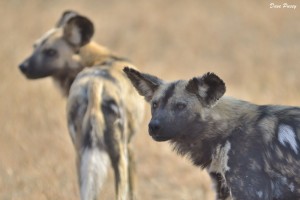 Well not only did we get a visit but were treated to a new pack of 5 dogs exploring the area while calling and investigating every scent to see if there is another pack around. Listen on the video to the characteristic hoooo hoooo call which is one of the classic sounds of Africa but rarely heard!(Turn up the volume)
[FMP width=”640″ height=”360″]https://www.leopardhills.com/wp-content/uploads/2012/12/20120809-Dogs-Aug12_0001.flv[/FMP]

The Alpha female has a very characteristic notch out of her ear (See image below) and we think it was the Alpha male doing most of the calling as he was one of the younger males. This is most likely a new pack formed quite recently as they are not breeding yet, very exciting! They have disappeared in the last few days but we hope they liked what they found and return here soon. 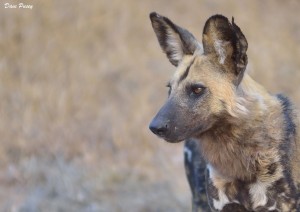 Buffalo
The large herd has again been frequently seen as well as many old bulls up in the north along the river.

Elephants
A sundowner along the lush Sand river will often provide a view of a parade enjoying their evening drink and there is nothing like the scene of a river crossing at sunset!

Hippo
They are still spending a lot of time out of the water while sunning themselves later on in the cool mornings, often a coffee break is spent with them as they lie on a sandbank.

Interesting sightings in August
Spotted hyaena sightings are on the increase, here is a youngster that bit off more than he could chew from the old buffalo bull killed by the Selati coalition. 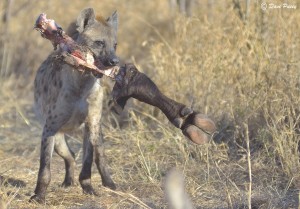 Sightings of the nocturnal creatures tend to peak now as the grass is very low, try and ID this little meercat impersonater. 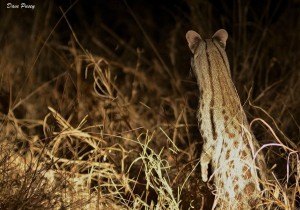 A juvenile squacco heron has taken up residence at a small waterhole, not common in this area, here he was seen feasting on a platanna. 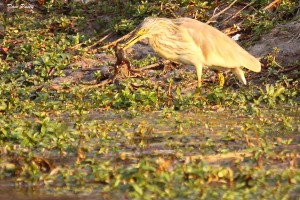 A relaxed side striped jackal in the early morning light. 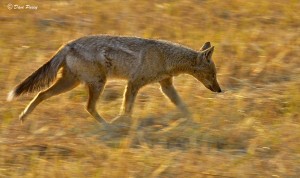 The pair of saddle billed storks have been frequently seen on the river, not too often that they are so relaxed and we can get both male and female in the same image. 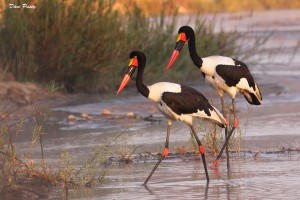 Red Breasted Swallow, one of the migrants back early after the warmer than usual winter we have had. 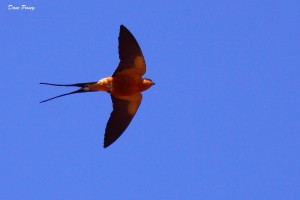