Dropping temperatures have warranted the dusting off of winter jackets and triggered the much anticipated and theatrical impala rutting season! The bellowing of outspoken impala rams echoes around the hills as they herd their females! Let’s not forget the less conspicuous and less numerous wildebeest and warthog males who also have the same objective in mind!

The red bushwillows are striking as their leaves turn orange and adorn the landscape softened by some warmer early winter light.

The last evening rays warm an ancient Jackalberry shared with a troop of baboons. 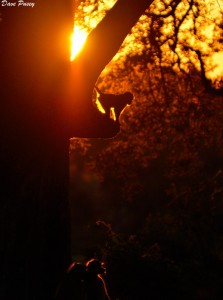 Leopards
Hlaba Nkunzi
Early April saw her perseverance and alluring advances finally pay off and she was seen mating with Dayone male in the west of her territory close to Leopard Hills. See video of her trying persistently to win him over.

She has, as always, spoiled us with sporadic visits through the lodge area, one evening even deciding to parade right through reception. 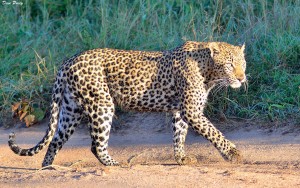 She has also been shadowing the Kashane male around in the east of her territory and we have just had word that they were confirmed to have mated! Hopefully some video and images of the pair will follow soon on the blog. 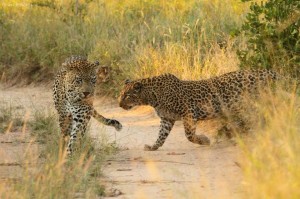 Thlangisa
Again our most viewed and photographed leopard in April! She just has a knack of turning up at the right moment, delighting our guests time and time again with her playful nature and sometimes not so cat like somewhat non lady like poses. See image below. 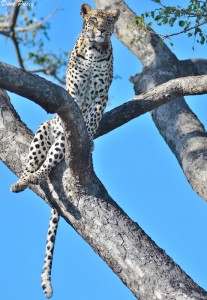 So this is how a leopard is supposed to drape herself in a tree…seems more comfortable! 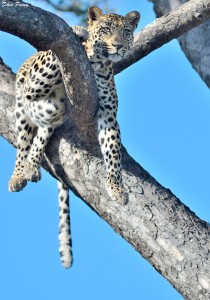 So often hopping around for a better perspective high up Marula trees. 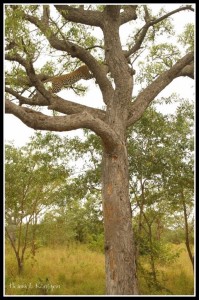 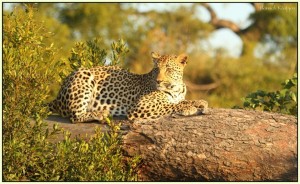 It is hard to believe when observing her zesty playful nature that she is now 3 years of age! This has brought about the associated territorial behaviour from her! See video of her scent marking and stretching her body fully to mark bushes with her cheek glands and increase the impression of her size. She does seem to have claimed a seemingly unoccupied area north west of Leopard Hills (See blue on female territorial map below)

Metsi
Very few sightings of her this month, her low profile is possibly due to her searching for den sites or possibly even denning already, somewhere quiet and secluded.

Xikavi
This experienced attractive female had no trouble luring Kashane over and was mating with him in her south eastern territory towards month end. She did eventually follow him far south outside of her normal territory as he continued patrolling. 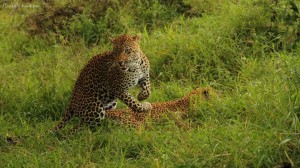 Shangwa
Shangwa and her sub adult male cub are still together periodically although he does spend much time on his own now as he approaches independence at 16 months old.

An interesting family encounter occurred when Shangwa and the sub adult male had an impala kill stashed up a Marula Tree.

With the two leopards moving between trees around the kill as a couple of hyenas lurked underneath there was a moment of uncertainty when a third leopard appeared!A young female from Shangwa’s previous litter, she darted up the tree and claimed the impala as her own while Shangwa and the young male just watched her feed with their own full bellies. 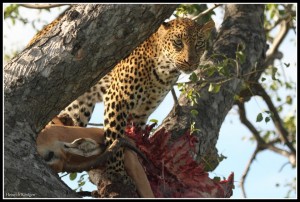 Female Territorial Map Update
Not much change, very stable territories. Thlangisa causing a little bit of trouble with the older females but seems to have settled on her niche for now! 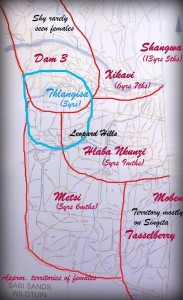 Kashane
His imperious presence has been enjoyed far more this month as he has pushed further west along the Sand river than usual, seemingly expanding his territory in this direction. There are probably 2 reasons for this! Firstly the lack of a big dominant male marking in the area since Xhinzele’s departure, Dayone male doesn‘t seem to go as far east as Xhinzele used to. The other reason being that the 2 females in the area are coming into oestrus, Xikavi and Hlaba Nkunzi. 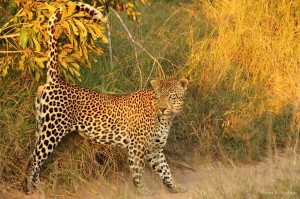 As he grows in stature more time is spent exploring the north up towards the Sand river, a veritable leopard magnet due to prey abundance and no doubt the higher density of females! 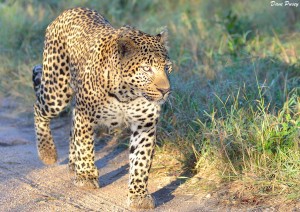 Apart from again earning the attentions of a number of females during the month in his expanding territory, this unwelcome onlooker below is one he needs to be weary of. 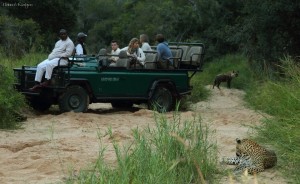 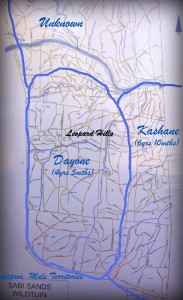 Lions
It is astounding to see the repercussions that the death of 1 dominant male lion (Short Maned Mapogo) can have on the lion dynamics and stability in a given area. His honourable death has rippled across the Sabi Sand and affected every single lion in some way or another! There is understandably an uneasiness and tension amongst the male coalitions, female prides and their vulnerable cubs alike! The Tug-of-War between coalitions has been extraordinary recently and will continue engrossing us for some time until stability prevails and females and cubs can breathe a little easier!

We will focus on our western traversing area but would like to touch on what is going on east of us due to the potential ripple effect!

See updated map below of approximate territories/locations of the coalitions and prides as they currently stand. The Majingilane Coalition who are in their prime at roughly 7 years of age are stronger than ever and seemingly content with their large territory and the 4 prides of females that they control (Tsalala, Sparta, Styx & Fourways). 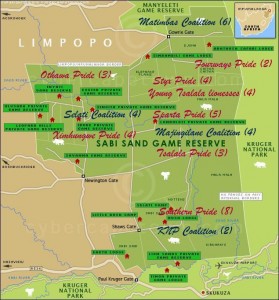 The 2 older yet powerful and confident Kruger males are content in the far south with the Southern Pride while the 6 Matimbas (5-6 yrs) are settled with most of their territory and prides being north in the Manyeleti. There are however rumours of a huge coalition of young males 10+ residing in the north of the Manyeleti which may push the Matimbas south in the near future, encroaching on Majingilane territory!

The 2 remaining Mapogo have apparently met the 2 Kruger males and been chased off, they seem to be currently residing in a quieter area in the south where there is little male lion activity. 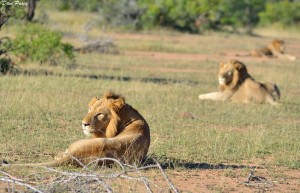 The victorious young Selati males (4-4 and a half years) have claimed the esteemed western sabi sands which boasts 2 prides of lionesses! The prize trophy for them being the 4 experienced and strong Ximhungwe females plus the 3 Othawa females. 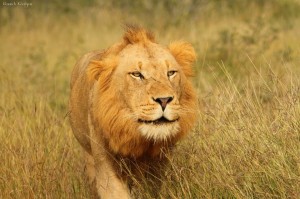 These inexperienced males haven‘t had it all their own way and are still finding their feet while they go about scent marking and entrenching themselves in their newly acquired territory. A couple of buffalo kills occupied them for the month while they seem to have given the wily Ximhungwe females and their cubs a break for now… 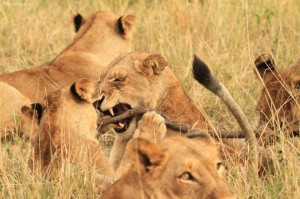 On the run, ready for anything the young boys throw at them these females sure do have strength and character accumulated from all the years and experience they gained dealing with the volatile Mapogo males!

Here is one of the older cubs (15 months now) feeding on a kudu bull. 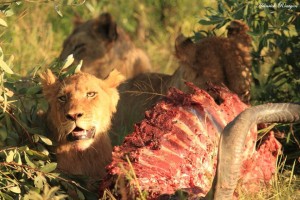 The youngest cub (9 months) showing lots of character after an arduous month! 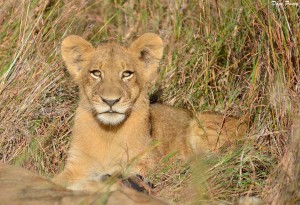 Othawa Pride
All 3 lionesses were seen together this month which is wonderful news as the whereabouts of the 3rd lioness was uncertain for some time. The litter of 4 young cubs hasn‘t been seen and has most likely been destroyed by the Selati males, unless they are very well hidden far in the north!

Not much video of the lions this month but here is a little to wet the appetite.

Painted Dog Pack
The pack of 9 were here in the west hunting for a few days during mid month and 2 of the females (Alpha & Beta females) are believed to be heavily pregnant. They will be looking for den sites, we are holding thumbs that they choose somewhere close by again this year.

Elephants
Very large parades have abounded this month all over our traversing area as well as a number of bachelor groups. A few mature old bulls, some of them in musth, have also graced us with their colossal presence!

Here is one such heavyweight crossing the Sand river. 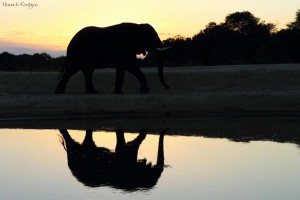 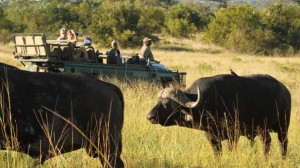 The large obstinancy has been seen periodically in the south while a number of “Daggboys” have been lurking close to the lodge for the entire month. A memorable encounter with one such specimen was enjoyed on a walking trail with 2 guests.

This image below taken from the Land Rover during the month is similar to what confronted us and accelerated our heart beats into overdrive! Underpants all had to be checked upon arriving back at camp, adrenaline still flowing. 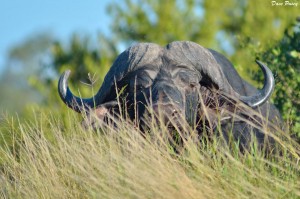 Jokes aside these are formidable animals and arguably the most dangerous to encounter on foot in Africa. We won‘t generally approach these animals as they are volatile but this sighting was very safe due to the circumstances.

We picked up signs of him well before seeing him in an open area and proceeded to watch him for a while from a safe distance before he picked up our scent and raised his head. All the time he had an escape route available should he choose to flee and we backed off quietly and left him in the same position!

Warmth is a priority for a business of Dwarf mongooses on chilly winter mornings, the warmest stump in the area becomes prime real estate!

An unusually relaxed Burchell’s Coucal sunning itself and allowing us the opportunity to see the detail of it’s large robust bill. 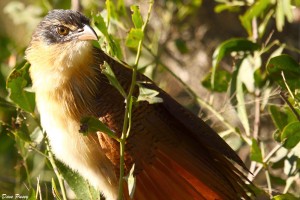 These birds are voracious predators ambushing other birds and small mammals! A treat to see one in the open as they are usually clambering around in bushes and long grass using their long hallux claw for support. Interestingly the chicks can clamber around bushes long before they can fly!