Leopards:
Hlaba nkunzi:
It was in this month that hlaba nkunzi lost her last cub to the Xinzele male. This means that she will come into oestrus and will start mating again. Gary and his guests saw her flirting and trying to mate with the xinzele male. The interaction between the 2 leopards was great. And all this was out in the open plains. We did follow up the next day and she had followed him down towards the river but then walked into the hippo dam females territory, a fight ensued and Hlaba nkunzi was chased back south to her territory.

Meetsi:
The meetsi female has been wondering into a few females territories, as you saw in a previous blog post she was in Hlangisa’s territory, this maybe one of the reasons why we have only ahd a view of only one cub for the last week or so. It is possible that one is exploring and hasn‘t been with the mother, but we will keep you updated on this. 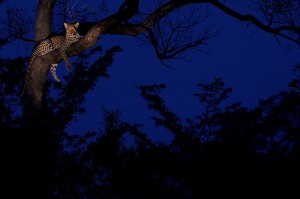 Hlangisa:
Hlangisa has been a ball of fun as usual. She is always a pleasure to view and her name suits her down to the ground, “Playful”.

Xinzele:
He has definitely been stamping his authority on the south and west of our traversing. He has been seen to calling, marking and causing all over havoc with all the “girls” in the west.

Lions:
Mapogo:
As we all know these last remaining 3 mapogos are getting on in their life. We had reports from the east that theere was a the southern pride slowly moving closer to our traversing area. It was only a few days ago that the mapogos went east and from the reports they chased the other pride far back east.

Ximungwe Pride:
They are still quite fragmented around the west and we haven‘t seen all 5 lionesses together for a very long time. The older lioness with the 8 month old male cubs has been close to leopard hills in the last week after she killed a huge male kudu by herself. The 2 male cubs are looking very strong and healthy. The short tail lioness with the 2 four month cubs is also doing well and we have been seeing her regularly. Due to the females being quite disjointed they are vocalising a lot to communicate with each other, impressive to hear from the deck of lodge in the mornings and evenings.

Buffalo:
We have been very privelaged to have 2 huge herds of buffalo join up in the south and an estimate of 700 individuals was seen on the plains, what a site!!!!

Elephants:
We have had some wondrous elephant sightings this month and there are a number of large herds with lots of young calves around at the moment! To spend time with a parade of elephants is always a treat and we had a remarkably memorable sighting with a herd in the open grassland the other day.

The calves were interacting and then 2 white rhino appeared on the scene and one young male calf decided he would try and show them who truly is the king of the pachyderms! A huge musth bull elephant then appeared and there was a lot of rumbling and interaction between the females and this bull who was clearly interested in one of the oestrus females.
[FMP width=”640″ height=”360″]https://www.leopardhills.com/wp-content/uploads/2011/05/20110501-Ellie-rhino.flv[/FMP]

Cheetah:
The old hanging lip male, Makamisa has made his appearance on a few occasions in the last month, he really is a magnificent specimen of a male cheetah. We watched him strolling around the south of our traversing area, scent marking with awe inspiring confidence against the sunset one evening. 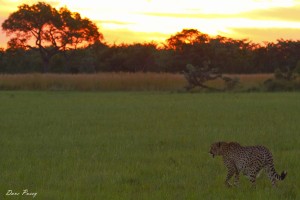 Painted Dogs Denning
With fewer than 5000 left on earth there is a buzz of excitement here at Leopard Hills as we have an African wild dog den here for the first time in over 10 years.

We have seen this pack on and off over the past year when they have come over from the east to hunt! After chatting to some rangers in the north east near the Kruger boundary we discovered that a large pack of 22 wild dogs had put pressure on them and pushed them towards our side to search for a den site!

We know how these animals can move massive distances and are extremely hard to find and follow at times so to have a confirmed den site is a real treat!

Latest news on the pack of 6…
They are soldiering on, 1 young female dog confirmed killed by a lioness and some close calls with a leopard and even rhino while out hunting in the last week! This leaves the 2 females, Alpha male, older short tail male and 2 yearling male helpers, so only 6 left in the pack.

There were 2 females that fell pregnant in the pack, usually it is just the Alpha female! We think the subordinate female fell pregnant as an insurance litter in case something happened to the Alpha female or her pups. This pack is only 6 dogs so it is imperative that they breed successfully this year.

We had an amazing experience a few days ago while listening to the pups down below in the first den. We previously assumed that these pups we could hear down in first den were the Alpha female’s however the events that unfolded the next day were a big surprise…

Now we couldn‘t see which female was hidden down in each den and when rangers arrived at the first den the following morning they discovered 2 dead pups lying on the road and no more pups have been heard at this den since. The Alpha female has emerged from the other den site and the subordinate female is now running and hunting with the pack again.

What seems to have happened is that the Alpha female has killed the subordinate female’s pups (the ones we heard) so that the small pack can focus solely on providing for her pups when they emerge. If the pups were killed by hyaena or lions they would have been eaten. So now we wait expectantly until we can hear and see any sign of the Alpha female’s pups down in the other den…

Getting to know the pack…
The pack consists of the Alpha male, Alpha female, old short tail male, 2 young males and 1 young female. See images below.

Below is an image of the Alpha male (on the left), he has very distinctive white markings on his rump, also look at his white bushy tail (males tend to have more white on the tail than females) . On the right is a young yearling male. 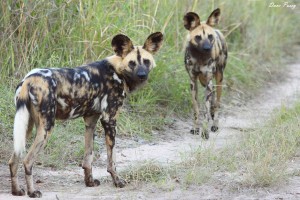 This image below is the Alpha female (on right) heavily pregnant a few weeks ago and the young female that was killed on the left. Look at the different colouration of the much older Alpha female, more tan in her coat and faded with time. 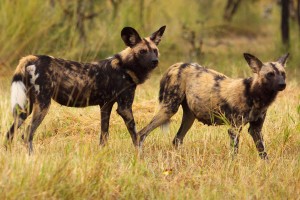 The below image is the older short tail male peering down into the Alpha female’s den which is a modified disused termite mound. His coat is also very tan with age. 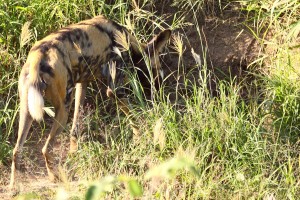