We Pride ourselves in being First Yet Again. (Excuse the Pun) - Leopard Hills Private Game Reserve Menu

We Pride ourselves in being First Yet Again. (Excuse the Pun)

We Pride ourselves in being First Yet Again. (Excuse the Pun)

Gary came up trumps for Leopard Hills on this mornings Game Drive, great tracking and what a find, there is “New Life” out there in the Bush.

We have been seeing one of the Ximungwe Lionesses out on her own for a while now, a sure sign she has been looking for a place to have her Cubs.

She has been frequenting an area of thick bush along one of the dry river beds not too far from Leopard Hills. In typical fashion, she has chosen her place well, difficult terrain with very little access, we respect that, and have left her alone, getting the odd sighting as she has gone out on the hunt but leaving her be when she has returned to her “hideaway”.

Gary found her tracks early this morning and he and Ronald followed up, the tracks were moving away from the area we thought she might have her cubs stashed away. Imagine the surprise when he walked straight into her with three little ones in tow, not quite what was expected. The Lioness showed no aggression as Gary and Ronald backed away and returned to their vehicle. Driving back in with his Guests, the Lioness and Cubs showed no sign of nervousness towards the vehicle and as can be seen from Gary’s pictures below, what an amazing sighting they had, the first Ranger and Guests to have seen the next generation of the Ximungwe Pride.

As most of you will know it has been a tumultuous time of late on the Lion front, and to see these cubs has boosted our morale hugely, not a replacement for the Sand River Pride in any way, but the Lion population is on the increase again, and vacant territories are being taken up by other Prides from the East, nature and its resilience never ceases to amaze me. 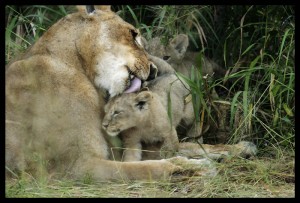 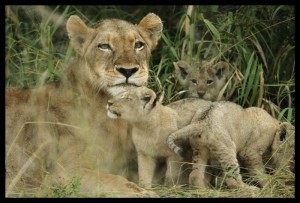 0 thoughts on “We Pride ourselves in being First Yet Again. (Excuse the Pun)”