The more amusing side of Game Drives

The more amusing side of Game Drives

All game drives are memorable, but sometimes some are a little more memorable than others for the wrong reasons. 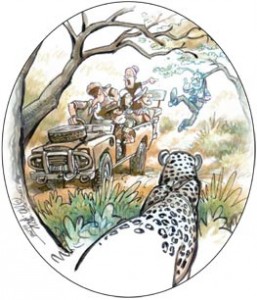 One of the funniest things that has happened to me during my years of being involved in the tourism industry involved a tiny, elderly Czechoslovakian woman and an elderly German man. They were traveling independently of each other, and both were unable to communicate in English. The rest of my group for the three-day safari were two English couples. It was a fun group of six, but in the back of my mind I realized communication was going to be a challenge.

I introduced everyone as we prepared to climb aboard the vehicle for the first evening game drive. Using my best sign language, I tried to explain to the two elderly non-English-speaking guests that perhaps they would be more comfortable sitting in the front row of the vehicle and not the back row, where they had already positioned themselves, as this could prove to be a little bouncy for them. Alas, my jumping up and down while making my best imitation of a vehicle driving through the bush simply brought squeals of delight from the elderly Czechoslovakian woman and a double thumbs-up from the German man. They were not moving, so we set out with them in the back seat.

Things went surprisingly well and we all got on famously. On the odd occasion I would have to get out of the vehicle and get down on all fours to demonstrate some bizarre rhino mating behavior – resulting in the same reaction from the elderly folk on the back seat. It became the norm: she would giggle and he would give the double thumbs-up with a broad smile across his face.

We carried on this charade for three days. Then, just as it was getting dark on the final evening’s game drive, a beautiful female leopard crossed the road in front of us and disappeared into the dense bush. I didn‘t have much time for elaborate explanations because I did not want to lose sight of the leopard. I turned in my seat and made a hand single for the people in the back row to keep their heads down as we headed off into the bush after the rapidly disappearing cat. The double thumbs-up and the predictable giggle were confirmation enough that my message had got through.

The first 20 meters in the bush went smoothly, until we had to manoeuvre under a thorn thicket. I turned in my seat briefly to give the hand signal to put heads down and on receiving the predictable giggle and thumbs-up, moved forward.

Now, during the entire three-day safari the Czechoslovakian woman had not uttered a single word of English. Imagine my surprise when out of the blue we all heard three very distinctive words come flowing from her mouth in a high-pitched squeal: “Man over board!”

Whipping my head around, I saw the elderly German hanging by his jacket in a thorn tree, which had gently disengaged him from the back seat of the vehicle. The first thing I noticed was the broad grin on his face, and he was still giving his double thumbsup while dangling in the tree.

Whenever I think back to this occasion, I am always grateful to the little old lady who had at least mastered those three little, very important words in English. 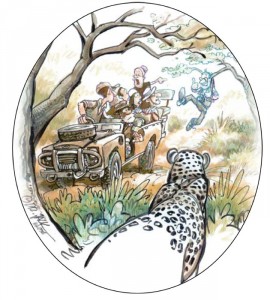 (This article has just been published in the latest Seasons In Africa Magazine which will be in circulation very shortly).

0 thoughts on “The more amusing side of Game Drives”