We have a puppy boom here at Leopard Hills..

Often one of Africa’s most overlooked icons – the endangered wild dog. With fewer than 5 000 left on earth you can imagine the excitement here on discovering an African wild dog den here for the first time in 10 years.

We saw this pack – seven adults – on and off over the past year when they came over from the east to hunt. Then rangers in the north east near the Kruger boundary told us a larger pack of 22 wild dogs had pushed them towards our side.

Wild dogs can move long distances and can be extremely hard to follow so our confirmed den site is a real treat. We have closed off the den to vehicles and are waiting to view the pups when they emerge after around three weeks. They spend their first three weeks in darkness in the den’s birthing chamber at the end of a tunnel and interact only with their mother.

The pups have been here for a week. Very interesting is that two females are denning and presumed to have pups. This is very unusual as packs are led by an Alpha male and female and she is usually the only one to breed (usually 8-14 puppies).

Alpha females have been recorded killing pups of other females or preventing them from getting food so it will be interesting to see what happens in this case.

We hope that due to pressure from the large pack of 22 in the east, both females might be bolstering the numbers in the pack and all pups will be tolerated. We’ll have to wait and see. A wild dog pack’s success depends on teamwork and strength in numbers. Research has shown that at least five adults are needed to hunt efficiently, so this pack of seven is in a precarious position.

While we patiently wait to meet the little black and white pups we have been lucky enough to view the other five dogs hunting.

A while back before they had denned here Gary & I saw them taking on more than they bargained for. A confident show of horns from the adult wildebeest protected these calves from a hungry pack.

Enjoy the pictures below. Will keep you all posted on the progress… 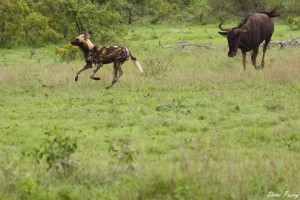 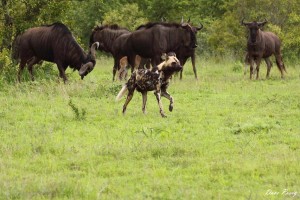