I said I would write again, and with my trip being constantly in my thoughts, I found the time to do so.

Being back in the machine of city life is certainly a stark contrast to the serenity found in the bush. It has taken me quite a while to find the time to sit down and write, yet between leaving Leopard Hills and now, I have had the time to ponder my visit. During these periods of hindsight, I am constantly reminded of the gems Leopard Hills’ traversing area displayed.

While the excitement of Africa’s Big 5 has connotations of romanticism in terms of adventure, it is always the seemingly lesser creatures that complete a memorable trip and leave one with a sense, that while we walk this planet, we are very small pieces in a mammoth sized puzzle. For me personally, I always leave bush retreat venues and reserves with a feeling that for a brief moment in history, one enters through the glass widow and we rent a bit of time from these creatures in their fascinating and complex world. The very second you think you are akin to the ways of the wild these animals will prove we have much to learn, and that out there, rules are a guideline at best. There is only one rule. Adapt or die. Knowing this, and looking retrospectively on my trip, I am constantly reminded of how each day is a gamble for these creatures, but as different as they are as individuals, there are species much the same.

One particular sighting that comes to mind was a late afternoon at Ottawa river crossing. We sat, in the dying light of the day, watching a troop of Baboons playing in a tree. Their antics were fascinating and the light added much warmth to the scene. A sharp turn of the head revealed a heard of Elephant walking on the other side on the river, which flowed like a sheet of glass, reflecting the oranges, pinks and purples of a sunset filtered through bush fire smoke on the horizon. So different are these animals in stature, but similar are their family structures, as well as intelligence, and even during this viewing, a kingfisher’s instincts overcame it, and dived for a fish in the river. It is during sightings like these, I am reminded that while I may be on a break, for all the inhabitants of the bush, life must go on, and a lot of effort is required to ensure survival.

There are a few other sightings that will stay with me for quite a while. Twice I saw Hippo out the water, in the midday heat. This was for me, a first opportunity to see the immense size of these mammals up close and personal. The second was with both Gary and Dave leading a drive where we came across a large herd of Buffalo. Gary and Dave made a call in terms of where they predicted the herd to be heading, that being a nearby watering hole. Gary decided to go ahead of the herd and remain stationary in their predicted path, with the intent of having a close sighting without intruding on the herd, and rather hoping for a non confrontational close sighting while the heard moved towards us. He was spot on, and his knowledge led to a whole herd of Buffs walking almost through us as we sat silently watching and listening as this closely packed mass of muscle came crashing through the bush. The other special sighting was, on two separate occasions, stumbling across large and magnificent Waterbuck who were quite content with the vehicle at close proximity while being in open bushfeld and offered a great view of these animals. The last that comes to mind was when our vehicle came to a sudden stop and Gary said, “Now there is a nice photo!” Gary reversed and right next to the road, standing on top of a small rocky mound, was a very mature female Kudu in some fantastic light. Like the Waterbuck before, she stood there for a period a lot longer than I expected.

I won‘t bore anyone with further ramblings, but suffice to say, my trip a few weeks ago was one of many wonderful moments, and a heartfelt thanks to all at Leopard Hills who made it such a memorable experience. 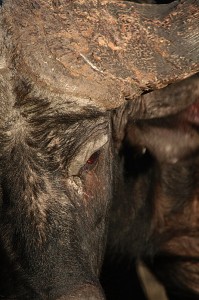 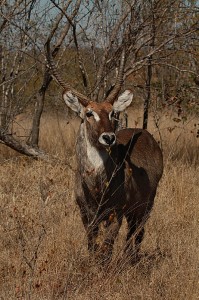 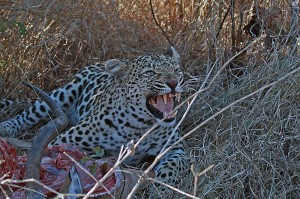 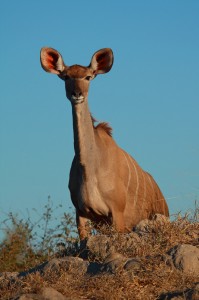 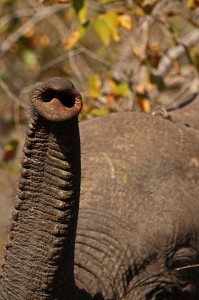 0 thoughts on “My Trip Continued”