Mortal Battle of the Bulls

Mortal Battle of the Bulls

We were again witness to the brutality of nature and how if the stakes are high enough these animals are willing to put it all on the line! This time the contenders were 2 large hippo bulls in an overcrowded waterhole!

Fights over territory and females are savage!

Aggression is most frequent and intense during the dry season when living conditions are more crowded and food is scarcer. A dispute between adult males begins with a yawning display that shows off their formidable dentistry, displaying the tusks in such a way is a dominance signal. This is a sign for intruders or rivals to stay away!

Water scooping is an agonistic behaviour often observed among all hippos, large, small, young and old alike where they scoop water in the air to show their strength! Contestants will begin by scooping water at one another and unless one of them submits by lowering his head, a full-scale fight can ensue.

This is exactly what happened here one gloomy evening while we were enjoying our sundowners. We observed the fight for a while but had to leave when darkness fell, we could hear the bellowing and grunting continuing as we drove off!

During a fierce battle the sharp canine tusks are used to stab and slash at the opponent’s head and shoulders. Despite their thick hides (up to 6cm on hindquarters and sides) they suffer serious and sometimes fatal wounds if the tusks penetrate the neck area in these battles. 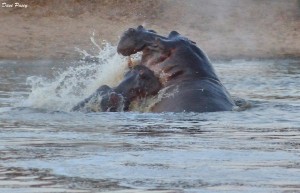 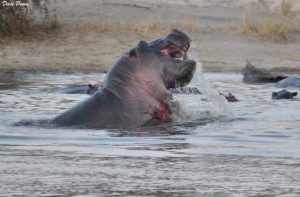 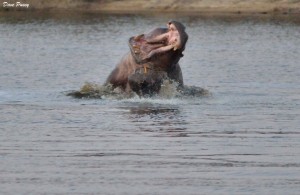 The next morning we returned to have a look and found the loser, bloated and floating in the below position! 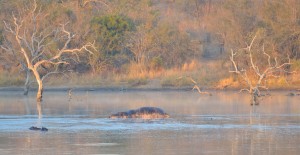 2 thoughts on “Mortal Battle of the Bulls”