Makwela Saga, its not looking good for the cubs.

Makwela Saga, its not looking good for the cubs.

As promised, we are attempting to keep you updated with the Makwela Saga, but information is sketchy at this stage.

I have been reluctant to jump in and report on this weblog every time we hear, “through the grapevine”, that there has been a sighting of Makwela or the cubs outside the Reserve, until I have been able to verify it through a reliable source.

Since Gary posted the last article on the 4th of this month, when Makwela was seen at Leopard Hills, feeding on a Bushbuck carcass which the Tegwane Male Leopard killed, Makwela has returned to the Community Area adjacent to the Reserve, telling us that the two remaining cubs must still be alive, why else would she thwart the danger out there unless there was a reason to go?

There has been a concerted effort put in to try and track her and the remaining cubs down, and entice them back into the Reserve, as it is a matter of time before something tragic unfolds outside where we have no jurisdiction. It can be clearly seen in the photographs that Gary has taken, see below, that Makwela is supporting some substantial injuries, how she acquired these is anyone’s guess, could have been a fight with a Male, Hyena, or maybe something that happened outside, which in my opinion in more likely. From what we can ascertain, although these wounds look severe, they don‘t appear to be life threatening, and should in time heal.

Yesterday morning there came murmurings and rumours that a Leopard had been shot close to one of the Villages near the boundary of the Reserve, we had to verify if this was true, and if so, was it Makwela? There have been so many rumours of sightings of her and the cubs, but every time the Reserve Staff have got into the area, there has been no sign of her, or the tracks have been old. This time however it was different, there was a fresh “goat kill” and evidence that Makwela was close by. Tragically, through discussions with the Locals, it was confirmed that one of the cubs had been shot the day before whilst hiding up near one of the villages; words fail me as to how we feel about this.

It must be understood that our relationship with the local community is excellent, and we have spent years within the Community area communicating the need for Conservation. We understand that there are direct conflicts when wild animals live in a close proximity to local populations, and although we do everything we can when it comes to keeping the Wildlife away from human inhabitation, this is not always possible. Our first concern is always for the safety of the population and we take this very seriously, when incident of this nature occur and animals occasionally break out of the Reserve Area, we do everything in our power to get them back in as soon as possible. There are occasions where crops and domestic stock have been damaged or taken by wild animals, but we have always reached a compromise, and contributed to the payment of compensation for the losses, this after all is fair and part of our Community responsibility. Since Makwela has been moving in and out of the Reserve, an agreement was reached with the Community that compensation would be paid for domestic stock she has taken, if evidence of the kill was recorded and verified. The local villages were in agreement with this arrangement and we felt that an understanding had been reached, buying us time to get Makwela and the cubs back into the Reserve. Therefore the death of her second cub by such unnatural means has stunned us all, and made all the more frustrating by the fact that there is absolutely nothing we can do to protect Makwela and her remaining cub while she is out of the Reserve. I must point out that this was the act of one individual and does not convey the sentiments and actions of a whole community, testament to this is the way this incident has affected our Trackers and Staff here at the Lodge, and we are all deeply saddened.

We are concentrating our efforts now in getting Makwela back into the Reserve, although this is not as easy as it sounds, and ascertaining whether her last remaining cub is still alive. As harsh as it sounds, the general consensus is that there is more chance of Makwela surviving if all the cubs are gone, and her reasons for being outside the Reserve are no more. My feeling is that the cubs would have battled to survive even within the Reserve, as we already witnessed what the new Tegwane Male Leopard did to Makwela’s first cub. Unfortunately her timing could not have been worse with the Wallingford Male, who we presumed fathered her last litter, seems to have relinquished this portion of his Territory to the Tegwane Male, and indeed there is now another Male Leopard also sniffing around the area, it would have been a matter of time before all her cubs were to meet an untimely end. Of course this is all speculation, we don‘t know for sure, however if all the cubs are now gone, there is a good chance she will return and mate again, in what might well return to a secure environment, so long as the Tegwane Male can establish his dominance here and give her the security she will need to raise another litter of cubs.

We promised to keep you all updated, I am just sorry the news is not that positive at present, I hope to report back again soon with more updates as soon as we have them. 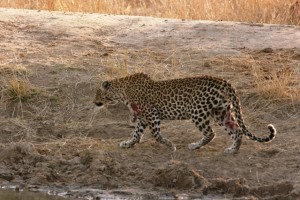 0 thoughts on “Makwela Saga, its not looking good for the cubs.”