Raymond Mahatlani has been with us at Leopard Hills since the Lodge first opened its doors nearly 12 years ago.

When we first opened our doors all those years ago, Raymond joined us as our Tracker, and as the Ranger in those days, I spent many hours with him in the bush, and I feel he taught me so much as to the workings of this wonderfully diverse and beautiful area. If I thought I know anything about the bush before I met Raymond, then I was very much mistaken, he opened a whole new world up to me regarding my surroundings, and for this I will be eternally grateful.

It became apparent right from the beginning that Raymond had a dream of becoming a Ranger, and he pushed himself hard to study and acquire the right qualifications to obtain his guiding ticket. Having done so, it was with great pride that as soon as the next vacancy opened up in the Ranging Department, Raymond was promoted, and has never looked back.

For those of you, who have had the privilege to go on Safari with Ray, will testify to his unbelievable local knowledge of this Reserve, and the passion with which he shows people around his “home”.

To me, Raymond is not just an employee of Leopard Hills, he is far more than that, he is a true friend, and I am honored to have been a part of his world for the last 12 years.

I salute you for your true dedication and spirit, and realize how lucky we are to have you as part of our Leopard Hills Family.

And thanks to Amanda Williams-Meek and her husband for this picture as well. 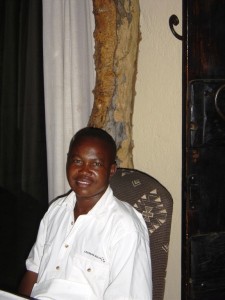 0 thoughts on “Everybody Loves Raymond”